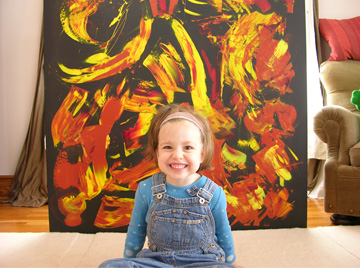 My Kid Could Paint That
(directed by Amir Bar-Levi)

Documentarian Amir Bar-Levi spent a year following the Olmstead family as their daughter Marla became a darling of the contemporary art world. The only odd thing about Marla meteoric rise to fame? Her age. She was 4 years old at the time and painting elaborate abstract canvases selling for thousands of dollars each. Following a large profile of Marla on 60 Minutes that brought into doubt the real creator of the paintings, the nature of Bar-Levi's project began to change. His excellent documentary My Kid Could Paint That about the Olmstead family, Marla's fame and his complicated experience filming them comes out this weekend.

Front and center in this documentary is many people's distrustful feelings towards abstract art's merits. If you always felt that Jackson Pollack was tricking you with his drips and splatters, would you be more likely to think a 4-year-old could paint museum worthy art or not? Also at stake in the story is the media machine which happily touts a cute little girl as a prodigy and then rips her family a new one for potentially hoodwinking the public. An entertaining and thoughtful film, My Kid Could Paint That ends without any easy answers to the mystery of Marla, so you'll be sure to have something to argue about with your friends over drinks afterwards.

Other new movies coming out this weekend include Ben Stiller's remake of The Heartbreak Kid, George Clooney's thriller Michael Clayton, the mockumentary Finishing the Game about the fallout on the set of Bruce Lee's last movie, Gwyneth Paltrow's brother Jake's first feature film which stars Penelope Cruz The Good Night, the teen hip hop musical Feel the Noise and the children's fantasy The Seeker: The Dark is Rising.

#60 minutes
#art
#bar
#ben stiller
#Bruce Lee
#children
#Clooney
#film
#friends
#george clooney
#Good Night
#gwyneth paltrow
#hip hop
#media
#Michael Clayton
#movies
#night
#Penelope Cruz
#people
#the game
#The Good
#The Heartbreak Kid
Do you know the scoop? Comment below or Send us a Tip
A new Gothamist is coming! We’ve moved comments over to our beta site. Click here to join the conversation and get a preview of our new website.