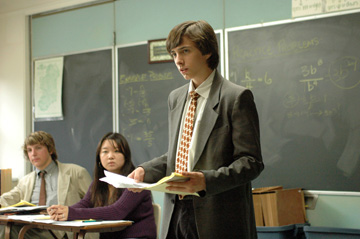 You know what they say about master debaters—they really know their way around an argument. A hit at this year's Sundance Film Festival, Rocket Science is a Rushmore-esque comedy about a New Jersey high school debate team and their secret weapon, stuttering Hal (Reece Thompson).

The film's director knows his way around a quirky suburban overachiever, Blitz previously directed the very charming documentary about the National Spelling Bee competition, Spellbound. As Jim Ridley explains in Village Voice review, Blitz is at home elucidating this cut-throat world on screen. "Once Rocket Science enters the realm of the debate competition, the director's eye for detail never deserts him. As shot by Jo Willems, these scenes evoke the low-stakes/high-drama milieu so astutely that you can almost smell the lemony floor cleaner in those too-white institutional classrooms." Fortunately David Ansen in Newsweek writes that its narrative is also as unexpected as its characterization is spot on. "[T]his sharp and painfully funny coming-of-age story—a hyperarticulate comedy about an inarticulate boy—manages to avoid just about every cliché of the genre. Each time you fear it's going to go for the obvious, it upends your expectations." By the way, Blitz blogged about the movie's premiere on Tuesday over on The Reeler.