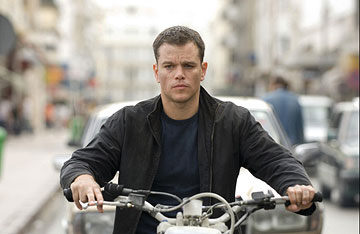 Matt Damon's super assassin with a grudge Jason Bourne is back in a top-notch third installment of the action-packed movies based on Robert Ludlum's novels. It's not often that a trilogy of movies gets progressively better with each film, but that has been the case with the Bourne movies. When last we left Jason, the amnesia victim who has discovered he's actually a CIA spook, he'd just apologized to the daughter of his last victim in Moscow. The Bourne Ultimatum picks up from there with a tense Russian chase scene, then segues into a British newspaper story surfacing which contains quotes from an anonymous CIA source about the super secret Treadstone operation and Bourne's involvement. Now Jason and the peeved CIA, including serious thespians David Strathairn and Joan Allen, are on the same hunt for this mysterious inside source.

Director Paul Greengrass really loves a herky jerky handheld camera and subsequently, every breathless action sequence from the brutal hand-to-hand combat to the squealing car chases has a visceral immediacy. It's one awesome, edge-of-your-seat section after another, culminating in some particularly amazing choreography using a police cruiser (turned into bumper car!) in a chase through Manhattan's city streets. Apparently Ludlum wrote a fourth Bourne book, and while the film's ending does leave open the option of a fourth installment, we almost hope that Greengrass, Damon and the producers will let Bourne end on this very high note.

This week a Movie Pick honorable mention goes to The Ten, a comedic riff on the Ten Commandments brought to you by David Wain and the folks from The State and Wet Hot American Summer. This flick has an amazingly rich cast (Paul Rudd, Famke Janssen, Adam Brody, Justin Theroux, Liev Schreiber and Gretchen Mol, just to name a few) and a lot of very bizarre Bible jokes, not least of which involves Winona Ryder stealing and then humping a ventriloquist's dummy. If you like this kind of absurd humor, it's worth checking out.

Some other new movies gracing a theater near you include a movie based on the popular bobble headed dolls Bratz, Jason Lee doing the voice of the superhero pup in Underdog, J.Lo and hubby Marc Antony's Hector Lavoe biopic El Cantante, comedian Andy Samberg ventures to the big screen in Hot Rod and Anne Hathaway channels the British novelist in Becoming Jane.