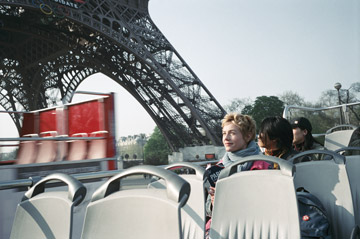 If the rose-colored Paris in Ratatouille has you itching for more stories from the City of Lights, might we suggest renting the fluffy and enjoyable comedy Avenue Montaigne which comes out on DVD this week. Set in one of the ritziest neighborhoods in Paris, the movie tells a number of interconnected stories circling around a young waitress (the pixie-ish Cécile De France) at a local cafe. Wandering in and out for coffees, romance and intrigue are histrionic actresses, self-doubting musicians, eclectic theater folk and aging art collectors. Should our young heroine join their ranks as a pursuer of art or go back to her grandmother living in the suburbs? Is the artistic life a full filling or futile one? These are some of the existential dilemmas these characters face, in between looking for love, of course.

Light and broadly drawn, the characters fall into silly but diverting scenarios. In particular, a subplot where the aging B-List actress played by Valérie Lemercier must convince an important American movie director (the man with a thousand cameos, Sydney Pollack) that she's perfect for his serious adaptation is fun. This movie's unabashed joie de vivre will surely put a little spring in your step. By the way, even though it came and went in the theaters, the critics enjoyed it too.

Other flicks coming to a video store shelf near you this week include Sandra Bullock's not so creepy thriller Premonition, Sienna Miller's wan impersonation of Andy Warhol It Girl Edie Sedgwick in Factory Girl, the desert goes bump in the night horror flick The Hills Have Eyes 2, and a new edition of the stripper schlockfest Showgirls: Fully Exposed Edition

. Didn't know Elizabeth Berkley could be more exposed, did you?