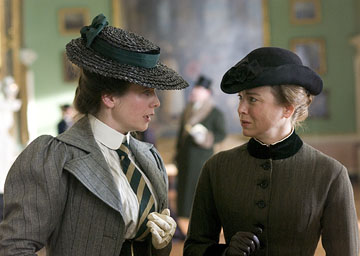 After Renée Zellweger's success playing a modern day British single gal in Bridget Jones' Diary, the producers of her movie from last winter Miss Potter must have thought they had a sure thing on their hands. Put Zellweger in a corset, reunite her with the hunky Ewan McGregor, give her an accent and introduce her to the built in Beatrix Potter fan base. It's gotta be solid gold. Of course the box office receipts say other wise, but that doesn't mean you should write off this modest period romantic comedy now that it's on DVD.

In a way, Miss Potter could almost be an alternate episode of Sex and the City, though transplanted to Victorian era London and without all of that distracting casual sex. Beatrix Potter (Zellweger), as the daughter of a well-respected middle class family and of a certain age, is expected to marry but what she really longs for is a writer's life. An avid observer of the natural world, she's been drawing and making up stories since she was a girl and she finally convinces a small publishing house to put out her book, The Tale of Peter Rabbit. The publishing company owners don't think too highly of this silly little kid's story and fob her book off on their youngest brother Norman (McGregor). Peter Rabbit becomes a runaway success, sparks fly between Beatrix and Norman and all seems rosy for our heroine (until, of course, everything goes wrong). While the depiction of Zellweger's Beatrix confiding in her drawings because they're her "friends" is a little off-putting, the actress' natural sparkle and Beatrix's ahead-of-her-time moxy makes up for it. Also, Oscar-nominated actress Emily Watson's performance as Beatrix's friend and Norman' sister, Millie (pictured), is a lot of fun. If that "spinster" had been born a few centuries later and had access to Manolo Blahniks, who knows what she would've been capable of. While Miss Potter may not have been a must-see in the theaters, it makes for a quite fine rental.

, another box set of Die Hard

to get you ready for installment number four hitting theaters soon, an adaptation of the kid's novel Bridge to Terabithia and the powerful HBO movie written by Peter Morgan (The Queen), Longford