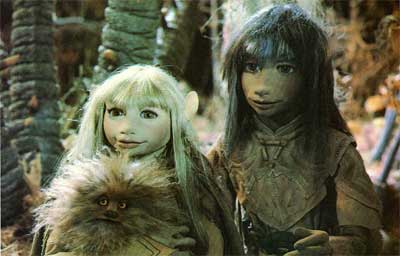 Mention either one of these children's fantasy films from the '80s to a certain kind of movie fan of a certain age bracket and you're guaranteed a nostalgic homage. Heck, even breathe that hallowed name "Jim Henson" and you're bound to get some fan love. Now, home viewers of the geek persuasion can gush over two new special edition versions of two of Henson's darker works, Labyrinth and The Dark Crystal, which both hit stores today.

As you surely recall, Labyrinth features a very young Jennifer Connelly trying to rescue her baby brother from the Goblin King (a fantastically stylish and stylized David Bowie), while Dark Crystal involves the quest of the Gelflings, Jen and Kira, to save their world from the evil Urskeks. Though they've been released on DVD in the past, these versions feature brand new high def transfer as well as a feature length commentaries from the films' conceptual designer Brian Froud, in addition to various featurettes and making of shorts. Watching these movies again, it's pretty phenomenal what Henson and his team were able to evoke with their puppets, long before the computer effects favored today. Also they're both still quite entertaining, though Labyrinth holds up slightly less well than Crystal. Grab some nostalgic snacks (we'd probably go with cookies & cream ice cream and Fiddle Faddle) and make it a weekend double feature.

Other new DVDs hitting stores this week include a pair of previous Gothamist movie picks (and which watched together could make for the most random double feature ever), the animated Adult Swim series Aqua Teen Hunger Force Colon Film For Theaters For DVD and the documentary about Sudanese Lost Boys God Grew Tired of Us, as well as the Ryan Gosling vs. Anthony Hopkin thriller Fracture and David Lynch's lengthy DV movie Inland Empire.