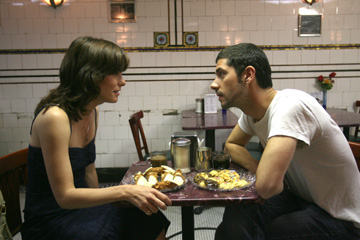 The pressure on a first time director is steep enough as it is, but if you're the daughter of celebrated '70s auteur John Cassavetes it's got to be extra tough. Unfortunately for the naysayers, Cassavetes delivered an intriguing character study wrapped inside a fluffy romantic comedy for her first feature film, Broken English, which comes out on DVD this week. Long time indie muse Parker Posey stars as Nora, a woman getting deeper into her '30s and perennially single. Working as a celebrity concierge inside a high end boutique hotel, Nora look the part of self-assured career woman but she seems lost inside her own choices. Her married best friend Audrey (Drea de Matteo) and her well-meaning mother (played by Cassavetes' mom Gena Rowlands) want to help Nora and support her, but Nora still flits from one bad date (notably with Justin Theroux as a mohawked actor) and mini breakdown to another.

The best parts of Broken English are when it tries to be the anti-Sex and the City showing Nora going through real emotional and psychological crises, not just shopping for shoes. For New Yorkers who like to see less likely local haunts than the Empire State building tapped for romantic scenes, Cassavetes also picks out some gems like De Robertis Paticceria on First Avenue. Eventually Nora seems to finally have found someone who sees past her quirks, the charismatic Julien (Melvil Poupaud), but his return to Paris could permanently end their affair. Some critics derided Cassavetes' coincidence-laden ending, but as a girl who's engaged to a Frenchman (musician Sebastien Chenut whose band, Scratch Massive, scored the film), maybe Cassavetes is just letting life be reflected in her art.

Other new DVDs hitting shelves this week include a two disc collector's edition version of the Joss Whedon space film Serenity, the Oscar-winning (and Gothamist recommended) German film The Lives of Others, and a Criterion release of David Mamet's classic House of Games.