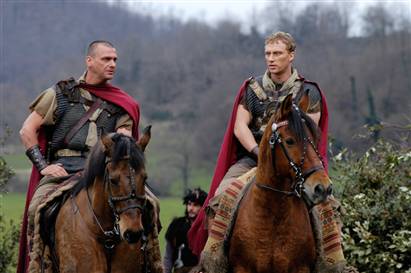 As another season of Emmy nominations show, those folks over at HBO original programming know what they're doing. Complex shows filled with meaty characters, lavish spectacle and quite a few racy scenes make those premium cable fees seem well worth the expense. However, if you missed out on the two seasons of Rome, the epic struggle of life during the time of Julius Caesar that's a bit of The Sopranos in togas, here's your chance to catch up as the series comes to DVD this week.

The two seasons revolve around the infamous assassination of the military general/dictator in the Senate; season one leads up to the climactic event while season two explores the aftermath. Hopping from intrigue amongst characters in the highest strata of Roman society to the lowest, Rome offers a real ancient world slice of life from social customs to city organization. The whole cast of the series is excellent, but there are particularly strong performances from Kevin McKidd and Ray Stevenson as comrades and underworld denizens Lucius Vorenus and Titus Pullo [pictured], as well as hunky James Purefoy as international play boy Marc Antony and his conniving Roman lover, Atia, played by Polly Walker. This is one of those DVDs that you'll pop into the player just to watch one episode and end up having a marathon viewing of the whole season.

Other new DVDs this week include the new Spielberg hotness Shia LaBeouf in the thriller Disturbia, Chris Rock's married man comedy I Think I Love My Wife, a special edition of Bruce Campbell's Bubba Ho-Tep and the two silly children's movies Unaccompanied Minors and Are We Done Yet?.