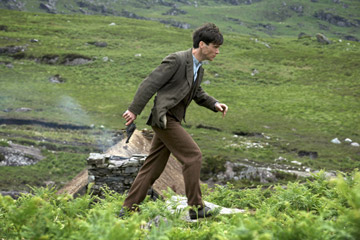 The Wind That Shakes The Barley

Nominated for BAFTAs, beloved at Cannes and ignored by the Oscars, Ken Loach's movies get great treatment overseas but are barely a blip on the radar of American movie audiences. It's a crying shame too because Loach has the ability to elicit almost documentary-like, naturalistic performances from his actors and his working class, social justice narratives are always provocative. His most recent movie, The Wind That Shakes The Barley, won the 2006 grand jury prize at the Cannes Film Festival and though it's set during the unrest of the Irish troubles, its themes of wrestling with a foreign occupying power and terrorism are shockingly current.

Cillian Murphy plays Damien, a young Irish doctor in training about to travel down to London, who after witnessing the brutal murder of his friend at the hands of harassing British soldiers decides to stay in Ireland to fight. Except for Murphy, most of the actors are unknowns because Loach wanted to fill his cast with legitimate County Cork locals. Our foreign ears may not be able to tell the difference (and might even require closed captioning) but Loach's commitment to verisimilitude even extended to his actor's accents. The story is a heart-wrenching one as the Irish violently struggle for legitimacy and don't be surprised if you need a few tissues before the credits roll. If you missed it in the theaters, don't let this thoughtful movie pass you by now that it's on DVD.

, and the most recent seasons of three hilarious TV shows 30 Rock