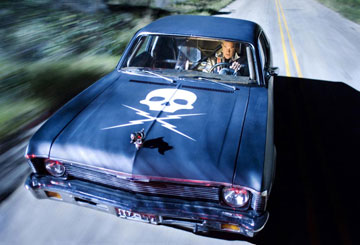 A Quentin Tarantino movie is 20 percent celluloid and 80 percent bravado, and the PR whirlwind surrounding the release of his recent double feature Grindhouse with Robert Rodriquez was a prime example. However even though the directors talked up the movie geek factor and the ultra violence factor, the project bombed at the box office. There's probably lots of reasons barely anyone went to see it, but choosing to sit through three hours of B movie, a genre that is by definition schlocky and bad, was probably a major one. Now QT and Dimension films have decided to release each of the films separately on DVD with his extended and uncut installment of Death Proof, about a crazed former stunt man and his evil muscle car that terrorizes girls, coming out this week.

The problem with this marketing plan is that neither Death Proof nor Planet Terror are fully realized, complete movies. (Planet Terror comes to DVD on Oct. 16.) They each run around an hour and a half, a pretty standard full length film running time, but they come across as half baked. Death Proof is really just two extensive sequences: a group of girls go out on the town in Austin where they meet Stuntman Mike and are murdered by him, and another group of girls encounter Stuntman Mike but this time they fight back. However, Death Proof is worth watching at home for Kurt Russell silly but fun, ham-fisted performance and for real life stunt woman Zoe Bell's phenomenal acumen behind the wheel. Only Quentin would think to write a whole character around a stunt person's abilities and though she's got Kiwi moxy to spare, Bell's not much of an actress. But hey, it wouldn't be a Quentin Tarantino movie if it wasn't heavy on the movie insider references and light on the substance. Another note worthy drawback to this DVD release is they don't contain the wonderful trailers that ran during Grindhouse. Maybe they'll end up in the eventual full box set.

(he added 40 minutes and an intermission), collector's edition version of the '80s legwarmer classic Flashdance

, and the uplifting football drama We Are Marshall