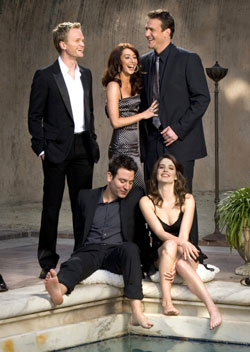 How I Met Your Mother: Season Two

More and more people seem to be jumping on the bandwagon to promote CBS's hilarious program How I Met Your Mother but as long as that network's popular sitcom Two and Half Men gets nearly double the viewers, it can't be reiterated enough. Maybe the release of the second season on DVD today will bring over more converts to the show's charming characters, witty dialog and creative storytelling devices.

For those unfamiliar, the show is framed by voice-over from Bob Saget as he explains to his children the story of how he met their mother while living in New York in the '00s. Ted (Josh Radner) is a young architect who lives with his college buddies Marshall (Jason Segal) and his girlfriend Lily (Alyson Hannigan) and hangs out with his womanizing friend Barney (Emmy-nominated Neil Patrick Harris) and crush Robin (Cobie Smulders). Each episode seems to have at least one brilliant, quotable one liner but it's the ever expanding richness of the characters that will keep you coming back every week, or watching one more episode on the disc. All five are so lovable and their lives feel surprisingly believable despite their sitcom origins. In addition to all 22 episodes from last season, this release also contains audio commentary on some episodes, a few featurettes about the making of the show and of course, the classic '80s pop inspired Robin Sparkles video that got so much viral video buzz.

, the most recent seasons of Entourage

and The Sarah Silverman Program

, a special edition of the X Rated Caligula

about the insane Roman emperor, and a 50th anniversary edition of Funny Face