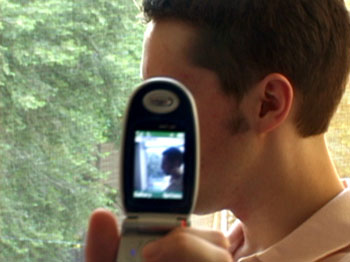 Half naked, hot young things gyrating on screen are just a click away in the wonderful world of the Internet. But does the proliferation of cheap video and the pervasiveness of text messaging and instant messaging actual keep us from really connecting, one human being to another? This is the intriguing premise behind LOL, a feature film directed by Joe Swanberg, one of the directors in the much-buzzed about "mumblecore" movement, which is being released by Brooklyn-based distribution company Benten Films on DVD today. (For a primer on the films see Dennis Lim's article in the New York Times and S.T. Vanairsdale's more critical take from The Reeler.)

As Lim points out, Swanberg's films like LOL and the recent Hannah Takes The Stairs can be characterized by their frank exploration of sexuality and improvisational acting style. In LOL, the story follows three young guys trying to cope with relationships in various stages of disrepair—Tim (Joe Swanberg) seems more interested in his computer than in his girlfriend Ada (Brigid Reagan), Chris (C. Mason Wells) is trying to get his long distance girlfriend (Greta Gerwig) to pose for some sexy cameraphone shots and Alex (Kevin Bewersdorf) is desperate to meet his internet girlfriend from St. Louis, despite the advances of a new friend in Chicago. All of this inept, youthful fumbling would be more annoying if it wasn't so damn true to life, and weren't punctuated by some joyful little art videos of people making musical noises. Like the video art of the '70s which these interludes recall, Swanberg's movie is having fun with its medium, even as it's critiquing its limitations.

Other DVDs hitting shelves this week include Will Ferrell's skating extravaganza Blades of Glory, the documentary about the international Air Guitar Championships in Europe Air Guitar Nation, the sweet and sad comedy Year of the Dog, the first season of Friday Night Lights (highly endorsed by Gothamist's Jeff Baum) and the Cannes favorite Red Road.