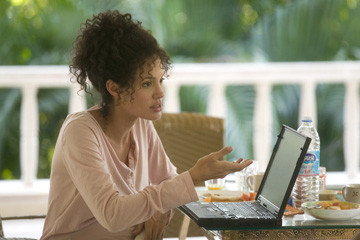 Being a journalist doesn't sound like a very dangerous profession, but for Daniel Pearl, his investigations while reporting on the situation in Karachi for the Wall Street Journal lead to his untimely end. Michael Winterbottom's most recent film starring Angelina Jolie offers a brief snapshot of Pearl, as played by Dan Futterman, and his stoic widow Mariane who used her own investigating skills to try to track down his abductors.

Like the paparazzi who hound the Jolie-Pitts as they drop off their kids at school, it's tough to look at A Mighty Heart outside its context as another Angelina Jolie movie. But if you can, you'll be well rewarded with Winterbottom's electric footage of Pakastani streets and a trenchant analysis of international intellectuals in hot spot countries, as well as Irfan Khan's layered performance as a strong-willed captain in the local police force. A cast filled with smart secondary performers like him even eclipse Jolie when viewing Winterbottom's movie at home, if you can believe it, and can set off some pretty heated post-movie discussion about our continuing role in the Middle East.

about a seriously dysfunctional couple, the first and last season of Aaron Sorkin's Studio 60 on the Sunset Strip

, Robert Rodriguez's side of the Grindhouse double feature Planet Terror