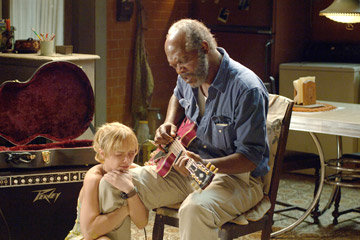 Your movie contains the song "It's Hard Out Here For a Pimp," and wins an Academy Award for it. How do you follow up the crowning achievement of writing and directing Hustle and Flow, a movie about the mid-life crisis of a Memphis pimp? If you're Craig Brewer, the obvious answer is to write and direct Black Snake Moan, a movie about a drugged-out nymphomaniac (Christina Ricci) who goes on a screwing bender after her boyfriend (Justin Timberlake) leaves for the Army, and the bluesman (Samuel Jackson) who tries to "cure her" by chaining her to a radiator. Even more bizarre than this movie's plot were the wildly disparate critical reviews it received when it was released in March. On Metacritic, there are opinions that range from awarding it a "masterpiece" score of 100 to a "not worth the film stock it was printed on" 25. Love it, loathe it or laugh hysterically at it while getting wasted - now that Black Snake Moan is out on DVD this week, you can make up your own mind.

Says Mike Russell in the Portland Oregonian, "[Brewer] takes raw exploitation material about occasionally ugly people, then turns it into human drama that's smart, powerfully alive and occasionally very funny. Despite its rawness, Moan is also one of the best movies about love and faith that I've seen in ages."

While Peter Travers of Rolling Stone argues," Offensive on multiple levels -- if only the plot had any levels at all -- Black Snake Moan leaves no Tobacco Road cliché unsmoked. Ricci gives it her all, and then some, but even her body and Jackson's blues can't heal a movie that rockets plum off its nut."

Just some of the other flicks getting the home viewing treatment this weekend include the well-liked but overlooked horror flick Behind the Mask: The Rise of Leslie Vernon, Mark Wahlberg's marksman thriller Shooter, the creepy marionette movie Dead Silence and the concert version of the tween hit High School Musical.