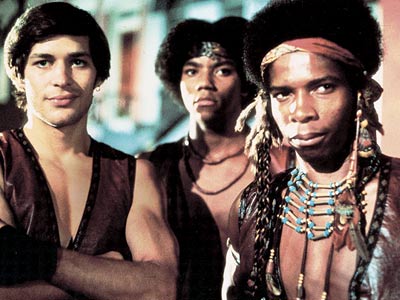 The Warriors
(directed by Walter Hill)

Nothing says mid-summer mania like a home screening of the '70s cult classic The Warriors. You can practically feel the racial conflicts, urban disillusionment and summer swelter emanating from the screen. If you've never experienced this must-see for New Yorkers, it's recent transfer to HD-DVD after a director's cut release in 2005, is a good enough excuse as any. The city's gangs have decided to converge for a peaceful summit and strategy session when the charismatic leader of the Riffs, Cyrus, is gunned down by the evil Luther. Stranded outside of their neighborhood, our Brooklyn heroes must sneak their way back across enemy turf to get home to Coney. While aspects of this movie—like the over-the-top, sexually ambiguous gang costumes and highly stylized dialog—comes across as laughable camp, it's still fascinating to see this strata of the city depicted on screen. According to a review on DVD Talk, the film looks and sounds just wonderful in this new format, with the comic book-esque primary colors and shadows particularly well-defined. This flick would be perfect as a background movie at a holiday BBQ and is guaranteed to have your guests calling for the Warriors "to come out and pl-aaaaa-yyyy."

Other new releases to DVD this week include friend o' Gothamist, Justin Kirk's most recent film, Puccini for Beginners

#bbq
#brooklyn
#dvd
#film
#gangs
#gothamist
#harry potter
#holiday
#justin kirk
#movies
#new releases
#new yorkers
#Ron Weasley
#the city
#the warriors
#this week
#Walter Hill
#warriors
Do you know the scoop? Comment below or Send us a Tip
A new Gothamist is coming! We’ve moved comments over to our beta site. Click here to join the conversation and get a preview of our new website.