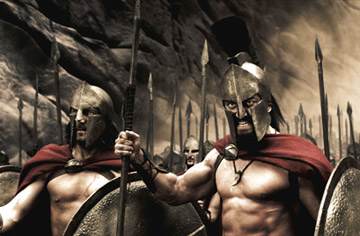 As digital technologies get more savvy, it seems as though the line between video game and movie gets even more blurry. A prime example is the adaptation of Frank Miller's graphic novel about the Battle of Thermopylae in 480 B.C.E. 300, which is out on DVD this week. Everything about this movie is overblown and over-the-top from the "brave few against the demonic many" plot line to the actors' chiseled physiques. While that may sound like a criticism of the movie, it's hard not to watch the nearly two hours of carnage with anything but slack jawed awe.

The Greek city state of Sparta is on the verge of invasion by the rampaging hordes of the Persian Army. However, the ruthless warriors can't go full tilt into battle because their spiritual advisors the Oracles haven't foreseen victory. Instead a small group of 300 soldiers lead by King Leonides head off for a covert mission and certain doom against the sexually ambiguous Xerxes and his throng. In order to not get swallowed up by the lavish and stylized visuals, all of the actors really ham it up. Gerard Butler rattles his manly Scottish brogue all over King Leonides's brave proclamations, Lena Headey fleshes out a stoic, yet sexy Queen Gorgo and Spartan citizen Dominic West is a nefarious cartoon. At the film's release there was a lot of internet chatter about the film's political themes and its relation to the Iraq War, as well as its sexual politics. Whether these controversial elements enhance (via spirited debate), detract or are just ignored is, of course, entirely up to you.