The CBGB Awnings: Where Are They Now?

[UPDATE BELOW] There were three CBGB awnings that hung over the door at 315 Bowery throughout the years—one took the 1973 to 1987 shift, another the 1987 to 2000 shift, and the third held court there for the final six years. That last awning is in Ohio, the second awning is in parts unknown, and the original...well, there are rumors.

Louise Staley, who was head booker and basically ran the club from 1986 until the last day, says it's long been believed that the band Jody Foster's Army (JFA) stole the original awning after their gig in the 1980s—"rumor has it they hung it in their backyard," she told me. I reached out to JFA for their comment on this—the band is still active, though seem to have gone through some lineup changes over the years. They haven't gotten back to me, and since it's been well over 24 hours, I will take their silence as admission of guilt. (There's still time to clear your name, boys!)

In the meantime, let's turn to the club's hardcore booker, Brendan Rafferty, who also told me JFA is responsible for stealing that original awning. He also provided information on what happened to the second awning:

"Sometime around 2000, the second awning was taken down and replaced after being badly damaged. It was, obviously, not unusual for bands to graffiti their names on the awning. But, one band, The Toilet Boys, painted their name across the awning in ridiculously large letters. They were never booked again.

In addition to the distracting eyesore of their name plastered across the awning, in the months that followed, someone tore a piece out of the fringe of the awning... and in a very short amount of time, that small tear turned into a large section being ripped off, as people tore pieces off over time.

So Hilly [Kristal] replaced the second damaged awning with a third one. That third one stayed up until the day we closed."

The second awning was thrown out by Hilly, but "rescued from a dumpster by a former CBGB employee. Its exact wherabouts are unknown," Rafferty told me.

Staley says this second one was created after the theft of the original, "a replica [of the awning] was made by a sign company on the Bowery. Hilly sketched it out and the company made it. It took about a week." The second and third awnings were very similar to the original, but with cleaner lines and an arched logo—the biggest difference seen in the numbers "315," which were no longer hand painted.

Over the years, there were also awnings made for "the pizza place, the gallery, the canteen, the store on 9th, the store on St Marks, and CBGB radio," Staley told me, but the CBGB one is the iconic symbol of the place, still. (That and the bathrooms.) 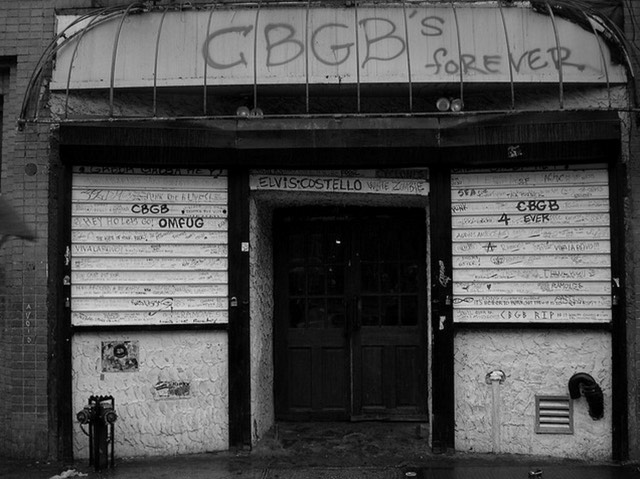 So much so that versions of the awning have popped up all over since the legendary club closed in 2006—you've seen it on the big screen (fake), recreated in gingerbread (fake, but delicious), and the saddest sight of all: in Newark Airport (definitely fake). Recently, we even saw one hanging over a garage in the Angelino Heights neighborhood of Los Angeles (also fake—but a pretty good replica). What are they doing, selling these things at Urban Outfitters? 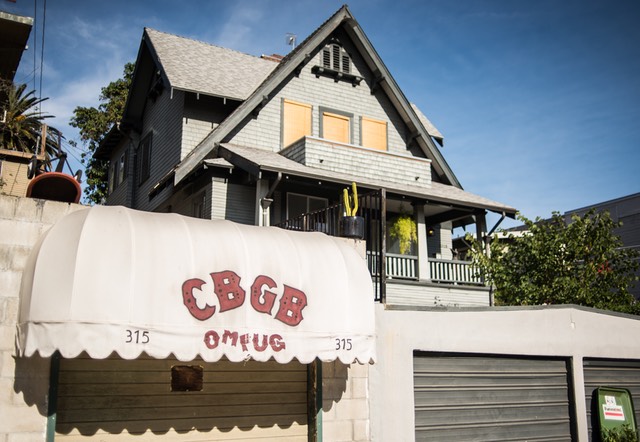 But the first two were closest to the platonic ideal of a CBGB awning, and as such, stayed true to old Bowery roots by being stolen and/or destroyed.

It'd be a safe bet that someone involved with JFA still has that original awning, if it hasn't been thrown out, but that—along with the location of the 2nd awning—may be a mystery we never solve. The final awning, however, is now in Ohio, which seems fitting—there's no place for punk authenticity on The New Bowery.

If you have seen the missing awnings, please email tips@gothamist.com.

UPDATE: We found one. Or rather, it found us.