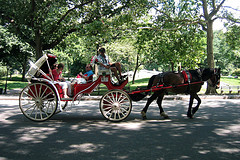 As history tells it, in the early 1900s "the presence of 120,000 horses in New York City was declared 'an economic burden, an affront to cleanliness, and a terrible tax upon human life.'" Today the horses are fewer (there are 221 licensed horses, 293 drivers and 68 licensed carriages), and a bit more popular -- albeit amongst the tourist set.

The NY Times has a piece on the New York City comptroller finally (for the first time) auditing the way the city polices the carriage horse industry. He stated that the city has "abandoned many of its responsibilities and permitted some carriage owners to maintain their horses in substandard conditions." The Coalition for New York City Animals tells the sad truth that "the average working life of a carriage horse on NYC streets is under four years compared to a police horse whose working life is about 14 years." Not surprising, as the comptroller points out the ball has definitely been dropped by the agencies watching the industry.

Monitoring by the Department of Health and Mental Hygiene and the Department of Consumer Affairs at the Central Park South carriage stands is inadequate, the audit found, and lax veterinary care in the field and infrequent inspections have created health hazards.

In addition, horses are not provided with enough water, risk overheating on hot asphalt and are forced to stand in their own waste because of inadequate drainage, the report said. And though licensing is an important tool for tracking horses, the audit found that the paperwork for 57 carriage horses described different animals from year to year, though the license numbers did not change.

He claims the most serious flaw has been "the failure to create a five-member oversight board mandated by city law in the early 1980s." This board would oversee the horses, drivers and carriages. The 18-page audit (which covered July 2005 to March 2007) contained little to no positive points on this industry, and the comptroller suggested the city “should consider creating an actual concession within Central Park to house both carriage and pleasure horses,” which would keep the horses away from harm and allow them to be more easily monitored. Meanwhile, over in Brooklyn some people are suggesting horsecars for Prospect Park.