Currently the top story on the front page of The Brooklyn Eagle's website contains a graphic photo of a murdered man hanging out of a car. The headline reads: "Grisly Murder on Atlantic Avenue in Brooklyn", and we were sort of shocked to find an actual photo of the "grisly murder" right there below those words. The story simply reads:

The body of 22-year-old Jamal Oughterson (right) hangs out of the back seat a car on Grand Avenue near Atlantic Avenue early Saturday morning after being shot several blocks away. Police said Oughterson had agreed to meet a friend on Fulton Street near Franklin Avenue when a gunman fired at him. He was whisked away from the scene by a driver who evidently intended to take him to the hospital, but the car was intercepted by authorities. Oughterson died while en route. The officer at left was at the crime scene.

Probably wouldn't have been their top story unless they had that "exclusive photo". What do you think, did they do the wrong thing by running this (there's a screenshot after the jump since eventually it won't be on the front page anymore)? We're sure family and friends of the victim would think so. 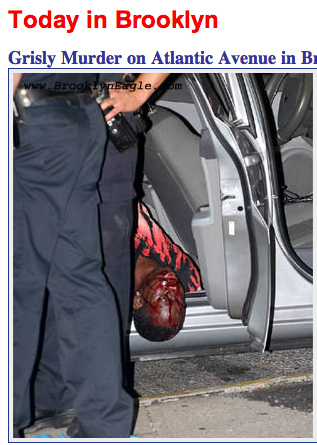