Brooklyn is too expensive, real estate agents are all poseurs, and affordable housing is still more of a pipe dream than a reality. Unless you're willing to shack up with 21 other people in a glorified jail cell, finding a new apartment isn't going to be easy. But if you're a "relatively young, hetero, professional male bachelor who grew up in America" and/or a "9 hot lipstick lesbian with bi tendencies," then you might just be the right person for the bro-iest apartment in NYC. Especially if you like getting laid "on a regular basis" and want to live with "potential future hetero-life mates and consummate wingmen."

You can check out the full nightmare Craigslist ad for the $2K/month room at the luxury apartment building at 27-28 Thomson Avenue in Long Island City below. The listing reads a bit like a late-'00s Thrillist post after the writer chugged a couple Red Bulls and mainlined an Entourage marathon...for the third time. Or perhaps something a a belligerent bruncher might write after a particularly delicious frittata. 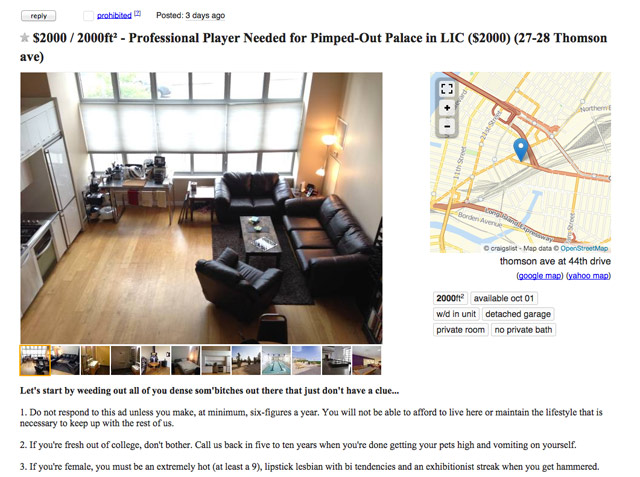 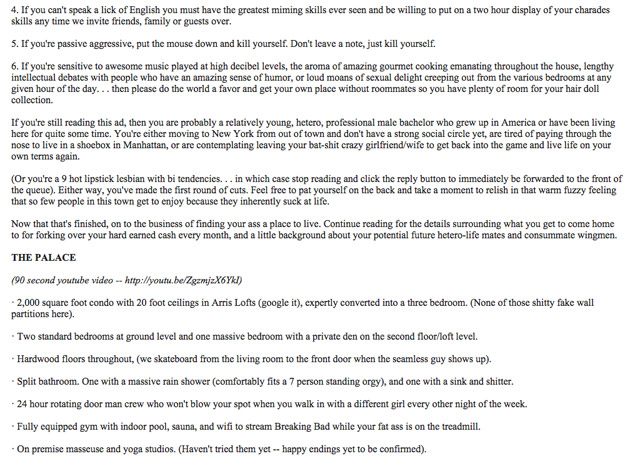 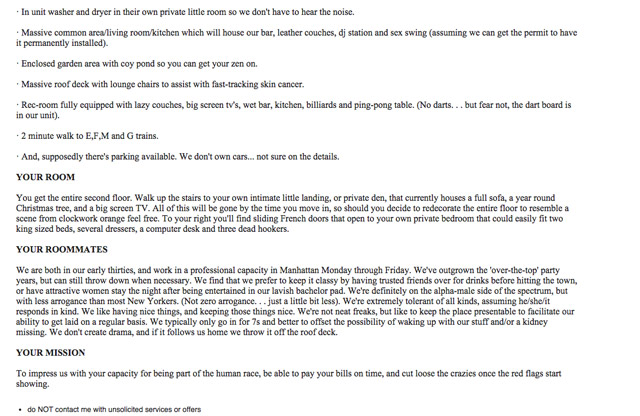 The thing is, the real estate market in NYC in 2014 is so bonkers, it's hard to tell if this is a parody or not. But there's something so painfully sincere (and crushingly terrible) about the alpha-male attempts at wit; this grasping at edgy humor seems like the flipside of this finance bro's temper tantrum. Add to that the minimalist American Psycho-esque decor ('Dudes love NBA Jam, sure, but this unused chess set is totally gonna bring in the hot bi-curious babes, amirite?'), and boom. Just don't pay too close attention to any potential murderous tendencies ("We don't create drama, and if it follows us home we throw it off the roof deck").

Here's a video tour of the pimped-out palace, including the "coy [sic] pond so you can get your zen on." Note: it has not yet been confirmed whether the on-premise masseuse gives out happy endings, so you've been warned, ya jabronis.

On second thought, maybe we'll just go back to living with our ex.

#bros
#craigslist
#lic
#long island city
#professional players
#queens
#original
Do you know the scoop? Comment below or Send us a Tip