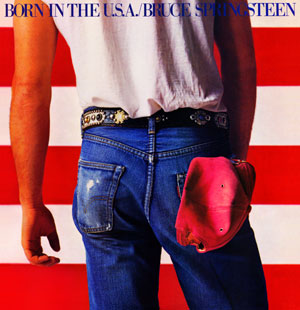 Like Russell Simmons and Ronald McDonald before him, Bruce Springsteen has come out to officially endorse Barack Obama for president.

Shortly before the Philadelphia debate, The Boss outlined why Obama is "head and shoulders above the rest" in a letter on his website:

He has the depth, the reflectiveness, and the resilience to be our next President. He speaks to the America I've envisioned in my music for the past 35 years...A place where "...nobody crowds you, and nobody goes it alone."

After the terrible damage done over the past eight years, a great American reclamation project needs to be undertaken. I believe that Senator Obama is the best candidate to lead that project and to lead us into the 21st Century with a renewed sense of moral purpose and of ourselves as Americans.

Over here on E Street, we're proud to support Obama for President.

As for Hillary, he seems to criticize her tactics in the letter, saying some people have tried to "diminish Senator Obama through the exaggeration of certain of his comments and relationships." And back in 1984, politicians loved the Born in the U.S.A. album--and Ronald Reagan and Walter Mondale both wanted his endorsement.

On a sad note, E Street band member Danny Federici died today, after a three-year battle with melanoma. The Star-Ledger wrote, "Federici, who played mostly organ as well as some accordion and glockenspiel, was a selfless virtuoso, adding his riffs to the rich E Street sound but never trying too hard to draw attention to himself."

#barack obama
#bruce springsteen
#endorse
#endorsement
#the boss
#The E Street Band
Do you know the scoop? Comment below or Send us a Tip
A new Gothamist is coming! We’ve moved comments over to our beta site. Click here to join the conversation and get a preview of our new website.