The Best Things To Do In NYC This Week: From K-Pop To The Mermaid Parade

Have a blissfully botanical evening with Atlas Obscura, Brooklyn Botanic Garden, and Sacred Bones Records. Plantasia gives guests many different ways to commune with plant life, all inspired by Mort Garson's 1976 album Mother Earth’s Plantasia, written "for plants and the people who love them." Album listening sessions will be introduced by composer and interactive ecology designer Mileece, who will discuss the history of plant sentience and demo her own "botanical feedback system" which makes music from the electro-currents of trees. Guests can also take guided tours of the BBG's current exhibit, Sonic Succulents, see Kirlian photography demonstrations of plant "auras," listen to a durational Moog performance, sip botanical cocktails, and more.

From the strange minds of comedians Marcia Belsky and Melissa Stokoski comes a brand new spoof play, Fiddler on the Rooftop Bar. The show is a modern, local, pun-filled retelling of the classic musical, in which Tsar Cuomo and the pending L train shutdown force Tevye and his platonic roommate Golde to contemplate leaving their home borough of Anetevka (somewhere near Williamsburg) and setting off for the far shores of Astoria. Belsky and Stokoski previously penned Handmaid's Tale: The Musical, which they performed all around NYC and on the road, selling out the Kennedy Center in Washington, D.C. Fiddler is part of the new series Golden Hours, which highlights long-form, scripted, and experimental comedy.

Dine al fresco at New York's oldest house during the second installment of the Fireside Feast dinner series. Hearth Cook Zach will prepare the feast—spring vegetables, rusk bread and fresh-churned butter, oysters, and more—over an open fire, using crops and herbs grown in the gardens of the Wyckoff Farmhouse Museum and the Lott House. There will also be historical cocktails from the Food Griot, Tonya Hopkins; and Alyssa Loorya of Chrysalis Archaeology will lead tours of the house and talk about Brooklyn history and contemporary immigrant communities in Flatlands.

Take a deep dive into the global phenomenon of Korean pop music at K-Factor, an orchestral concert exploring the sonic details and musical ingenuity that characterize the genre. A 50-piece symphony orchestra conducted by Yuga Cohler will perform a curated set of songs by well-known groups artists like Black Pink, 레드벨벳 (Red Velvet), and 서태지 ( SEO TAIJI ), as well as many others. Each song has been specifically arranged to emphasize K-Pop's "unconventional song forms, genre-bending juxtapositions, imaginative harmonies, and spectrum of international influences." The program is presented by Lincoln Center Young Patrons, who will host an after-party with DJs, dancing, and snacks. 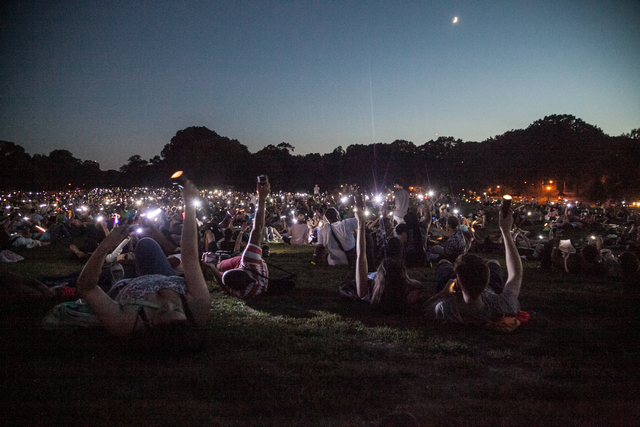 Public pranksters and comedy collective Improv Everywhere are back with one of their most popular annual interactive events. Join thousands of New Yorkers of all ages for MP3 Experiment 16, where participants don headphones to receive secret, synchronized instructions via a smartphone app and all perform absurd activities and movements together, while everyone else in the park tries to figure out what on earth is going on. RSVP for exact location information, and check the site for a list of items to bring, which includes things like a portable acoustic musical instrument and something that glows in the dark—which should give you a glimpse into the kind of silliness likely to ensue.

Get out and play at an afternoon party for the whole fam. School's Out for Summer features snacks, games, and activities, like graphic storytelling by Ivory Nunez-Medrano and face-painting by Agostino Arts. There will also be musical performances by Casita Boom Drummers, DJ Delaceiba, and Latin freestyler Judy Torres. In addition, Casita Maria will unveil a brand new mural painted by Lady Pink, a graffiti writer in NYC since 1979 and one of the best-known female street artists of the 1980s. 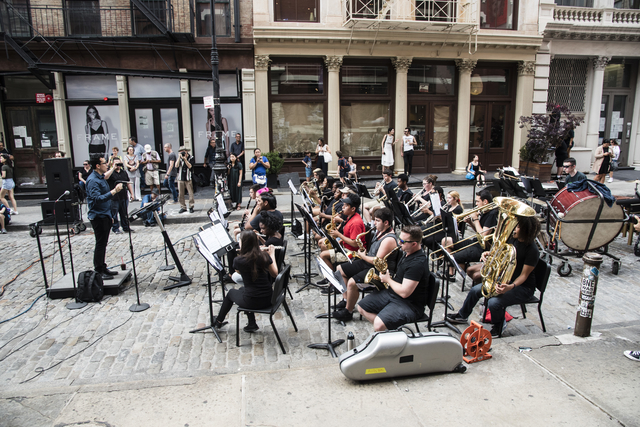 It's time again for the biannual sonic celebration that is Make Music New York. Now in its 13th year, the festival presents 1000+ musicians of all ages, abilities, and backgrounds popping up in public plazas and parks, on sidewalks and in parking lots, and in partnership with cultural institutions and businesses in every corner of the city. This year's extravaganza goes from Tottenville Public Library on Staten Island's southern tip to Eastchester Heights at the very top of the Bronx to every other end of NYC. There will be hundreds of performances: punk in a backyard by Rockaway Beach, jazz in a Sheepshead Bay senior center, Americana at Forrest Park in Queens, classical in a Harlem garden, Asian pop in a Chinatown kiosk—all day long and all free.

Explore the "celestial-terrestrial connection" on the longest day of the year at the Socrates Sculpture Park's Summer Solstice Celebration. There will be plenty of day-into-night activities, like face-painting, tarot readings, spaceship-sculpture building, lantern-making, and telescope tours of the sky by scientists from LaGuardia Community College; there will also be live music and performance by Secret Society Dance Company, Imamou, and Heritage OP. Plus a sunset ritual as night eventually starts to fall, with ceremony, circle-singing, and story-sharing with Cetiliztli Nauhcampa Quetzalcoatl in Ixachitlan, Urban Shaman Mama Donna, and Kevin Nathaniel with Harmony Mbira. 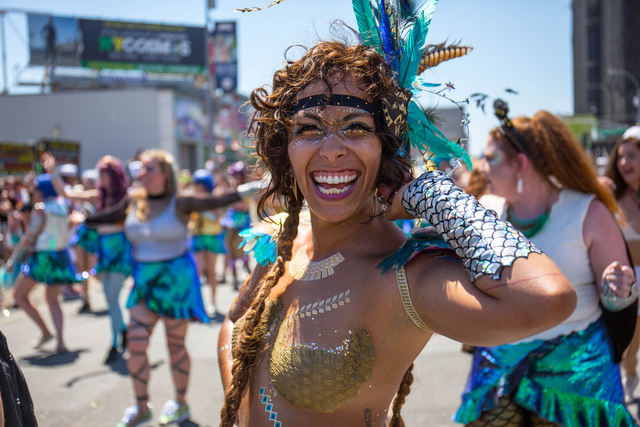 Summer is here, which of course means Brooklyn's wildest, most celebratory, scantily clad, sequin-and-fish-scale spectacle. The Mermaid Parade, the largest art parade in the United States, is "a celebration of ancient mythology and honky-tonk rituals of the seaside," in which 3000+ people march, dance, roll, shimmy, and shake down the Coney Island boardwalk dressed in all manor of maritime splendor and artful interpretations of aquatic affect. If you want to keep things lively post-parade, head to the official after-party at Kitchen 21; if you're still not done after that, make your costumed, glittery way to Gemini & Scorpio's third-annual Sea Creature Stomp.

Honor Native American heritage in general, and the Lenape people who first inhabited Inwood Hill Park in particular, at the 17th annual Drums Along the Hudson, a day-long, family-friendly, multicultural celebration. Presented by Lotus Music & Dance, the fest features Manhattan’s only open-air powwow, led by Louis Mofsie and the Thunderbird American Indian Dancers. There will also be plenty of activities, including Native American crafts, storytelling, international cuisine, and a World Market Tent.