The Best Things To Do In NYC On New Year's Eve

What a year! Whether you want to kick 2018 to the curb with a 27-hour dance party; a 600-balloon drop; a masquerade ball; or some thunderous, cathartic fireworks, we've got you covered. If you still haven't made your plans, here are 15 different ways to ecstatically ring in 2019.

Here's a free, no-fuss, family-friendly way to start the new year with a bang. Join tens of thousands of Brooklynites—including Borough President Eric L. Adams—for one of Brooklyn's biggest outdoor parties. The 39th annual New Year's celebration takes place in beautiful Grand Army Plaza, where there will be live entertainment by Quintessential Playlist and a huge fireworks display at the stroke of midnight.

Ring in the new year singing a robust melody at the Concert for Peace, an annual tradition since 1984. This year there will be symphonic and choral performances of Bach's "Dona Nobis Pacem," Robert Convery’s setting of Martin Luther King, Jr.’s "I Have a Dream," "Make Peace" by David Lang, Wayne Oquin’s "Alleluia," and an audience-participation rendition of "This Little Light of Mine" to start the year with "hope, joy, and affirmation."

Juliette of the Spirits @ Private brownstone

Have your fill of decadent underground revelry at a new soirée designed by Juliette Campbell, producer of the long-running Shanghai Mermaid. Juliette of the Spirits is an avant-garde, Fellini-inspired house party in a private, three-story brownstone. There will be live music and unusual performances all night, including chanteuse Phoebe Legere, sword-swallower Fibi Eyewalker, burlesque and boylesque by House of Olive, and many more. Come dressed in "New Year's high glamour" or as if you're waiting for your cameo in a Fellini film. 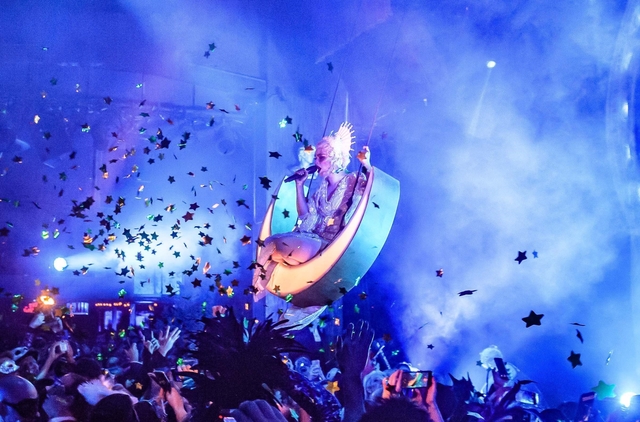 An absolutely opulent NYE move is the King's Winter Masquerade. Tickets at various tiers include a lavish three-course meal, an immersion into the world of Sleep No More, and a massive masquerade party. There will be exclusive live performances, art installations, jazz lounges, jam bands, DJs, and of course an open bar all night. Dress code is "fit for a king" in gold, silver, and black.

For a less extravagant but still excellent time, head to Rubulad to explode into the new year. There will be live music from brass bands to French rockers, including Preachermann and the Revival, Funkrust, Van Goose, and Les Sans Culottes. Plus DJs, tarot readings, visual art, and the usual assortment of unique artistic interventions. Dress to sparkle and shine.

If you want to get a jump on those resolutions, start the year by taking a bracing four-mile run through Central Park with the New York Road Runners. To get you in the mood, there will be a pre-party with music, dancing, an interactive dragon, stilt-walkers, and more live entertainment. The run itself starts at midnight, accompanied by fireworks, and at the halfway mark will be a sparkling cider station with a DJ to keep everyone hyped. 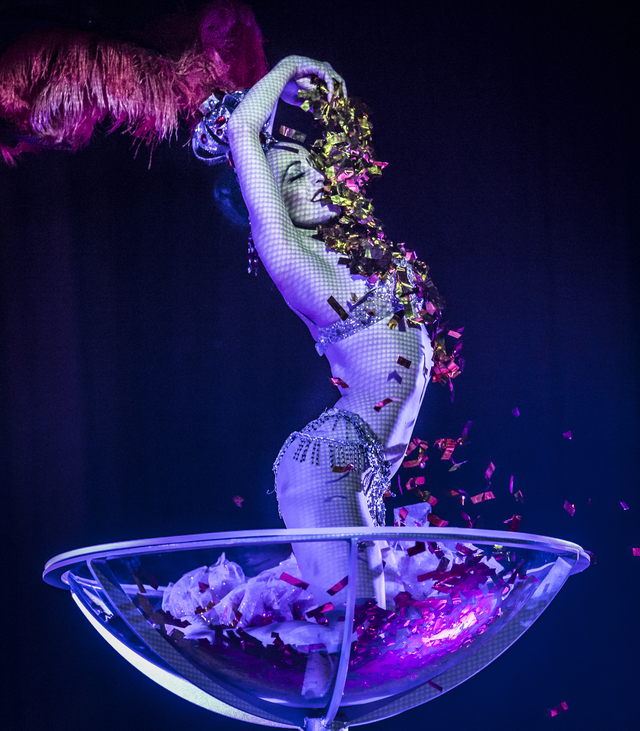 Go in for lavish opulence with Dances of Vice's Celestial Ball. (photo by Mark Shelby Perry)

Spend the night among the stars at Dances of Vice's Celestial Ball. The eclectic program promises an array of mythologically and celestially themed performances, including music by the Lowdown Stompers and Morricone Youth, burlesque cabaret by the Painted Ladies, snake dancing by Syrena, and jazz moves from the Sugar Shakers, as well as plenty of aerialists, stilt walkers, tarot readers and more. Dress code: starry-eyed vintage glamour.

If you're not one for all the costumes and frippery, perhaps a brilliantly beery night is more your speed. The Brooklyn Brewery's annual bash will have an open bar stocked with special barrel-aged releases, fried chicken from Pies & Thighs, and DJ Tekit Izi to keep you dancing all night. The midnight toast will showcase an unreleased Ghost Bottle.

Head out to South Brooklyn for a real DIY rager at the Brooklyn Lodge. This three-floor house party will have live music and DJs, an all-night craft cocktail open bar, a champagne fountain, and a 600-balloon drop at midnight. Plus 3D projection art, a basement pinball lounge, a photo booth with props, and more. Semi-formal attire is encouraged. 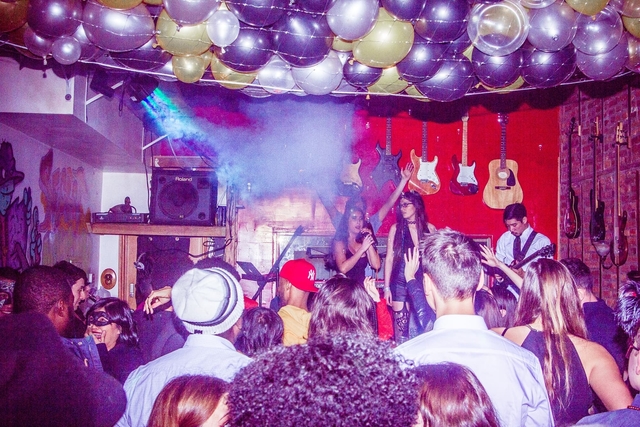 600-balloon drop in a secret mansion, anyone? (photo by Kareem Montes)

Party with punks and environmental activists at the legendary C-Squat while celebrating the sixth anniversary of the Museum of Reclaimed Urban Space and the 31st year of the grassroots environmental group Time's Up NYC. You can join a group bike ride to the shindig from Brooklyn or Manhattan, or just show up for a raucous evening of music from by Rude Mechanical Orchestra and Banji, plus multimedia performances by Eric Drooker, Seth Tobocman, and Fly.

Lose yourself in all kinds of music at a seriously huge throwback warehouse party. This 50,000-square-foot space will boast dozens of bands on eight different stages, each curated by a different music label or collective, including Unseelie, re:nü, Melting Point, Dae Dham, and Cipher. Each stage showcases a different kind of music, from "kaleidoscope techno" to hardcore to "bleak intellectual exercises in the dark and danceable."

How Cool Is This NYE Party? @ Coney Island

Feel fabulous among the freaks on Coney Island at this party presented by the Funhouse Philosophers. The night kicks off with performances by Dick Zigun, the unofficial mayor of Coney Island, and Bambi the Mermaid. Then the whole shebang decamps to the boardwalk to watch the waterfront fireworks, after which ZeroBoy hosts a "circus sideshow fire finale." Admission includes one free Mermaid Pilsner beer. 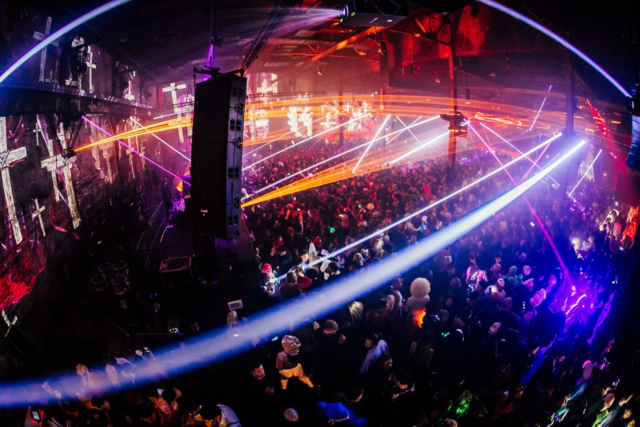 Test your stamina at a 27-hour party presented by CityFox. This one takes place in eight differently themed rooms across four floors with 20+ musical acts, including Swiss duo Adriatique, South African producer Culoe De Song, ethereal beatmaker Lee Burridge, sonic experimentalist Tim Green, and Danish indie-dance group WhoMadeWho. Each space is filled with dazzling lights and video projections, there are ambient lounges when you need a break, and local food vendors will be on hand to keep your energy up.

Queer up your New Year's with gay nightlife impresarios Hot Rabbit. Their LGBTQ NYE features plenty of DJs, Vogue-Go from House of Olympus, drag, dance, and other performances by VanityQ, Honey Queer Burlesque's Scarlett Snow, and TRX, and a champagne toast at midnight. There will be door prizes for best dressed, so do it up.

To unlock your dark magic, the extravagant Illuminati Ball presents an elaborate night full of wild experiences. The surreal soirée used to take place upstate for tiny groups of 30, but now it's taking over a huge former bank, filling it with ritual ceremonies, elaborate aerial, fire, and levitation performances, and multiple Illuminati-inspired rooms for dancing, music, and storytelling experiences. Dress to impress, and all guests will receive a unique mask to keep.

#events
#events guide
#new year's eve
#nye
#nye 2018
#original
Do you know the scoop? Comment below or Send us a Tip