Are those Suicide Squad tickets you’re holding? Nine Lives? Shame on you. Sell those tickets to a friend at once and invest that money in a better cause: the summer blockbuster you’ve been waiting for, even if you don’t realize it. This Saturday, August 6th, Joe Dante’s 1990 film Gremlins 2: The New Batch will play at BAM Rose Cinemas on 35mm.

Now, I realize that the idea of budgeting time for the sole purpose of watching a twenty-six year old sequel to that Mogwai movie—which, if you’ve seen Dear White People, just might be an allegory for a suburban fear of minority integration—on an obsolete format seems crazy. Us film journalists are weirdos until our dying day. Praise be. But for one, this isn’t on Netflix. Okay, it might be on iTunes or Amazon, but it’s not a movie to watch by yourself or with just one other bored friend on your laptop (or your Apple TV, you fancy so-and-so). Remember how crazy the Gremlins went when they watched Snow White in the first movie? Yeah, that’ll be you, and the rest of those yukking up around you, watching Gremlins 2 this weekend.

The movie is, often literally, a living cartoon from beginning to end; a fourth-wall-demolishing Tasmanian devil of slapstick, celebrity cameos, self-flagellation, and a darkly comic disregard for whatever is expected of a sequel. It’s a fossil of a time before total corporate control of franchise properties. Since Dante was given the now-unheard-of free reign to do whatever he wanted—no joke, Warner Bros' conditions were “make sure it has Gremlins, Joseph”—he raised the bar for and the mirror at studio-mandated sequels forever. Not bad considering he never wanted to make one at all.

A little exposition—by 1989, Joe Dante was hot. The Jersey-born sponge of Chuck Jones and Famous Monsters magazine found success as a trailer editor for B-mogul Roger Corman and director of budget satires Hollywood Boulevard and Piranha, the latter a loving mock of Jaws, before hitting big with The Howling in 1981. That was plenty to catch the attention of Steven Spielberg, a kindred dreamer with a boyish eye for suburban fantasy, who appointed him director of a little project about cuddly creatures turning heel and wreaking havok. The studio was hesitant, but Spielberg’s box-office pull spoke louder. Dante’s penny-pinching paid off; Gremlins’s domestic pull was nearly $150 million on an $11 million budget, one of the top five hits of 1984.

Entertaining as it is, Spielberg’s fingerprints are all over Gremlins, but on their next collaboration, Dante’s mark won out. Twilight Zone: The Movie saw Dante, Spielberg, John Landis, and George Miller revisiting classic TV episodes with their own spins, Dante’s having the most recognizable directorial style (though Miller places second with his rendition of “Nightmare at 20,000 Feet,” which could effectively play silently). His was more cartoony, placing the horror of cartoon physics in a tangible world. This verve grew with middle-class ventures like Explorers (the space travel wonder starring young Ethan Hawke and River Phoenix), Innerspace (shrunken Dennis Quaid finds himself in Martin Short), and The ‘Burbs, a satire on white suburbia in which Tom Hanks, at his comedic best, fends off neighbors who may be graverobbers. Not all three could match Gremlins’ success, which is perhaps why Warner Bros continued to press Dante for a sequel. Though they were successful in bagging him, they didn’t count on the consequences of giving Dante the keys to the car. Dante, they—and the audience, even years later—would realize, is the biggest Gremlin of them all. 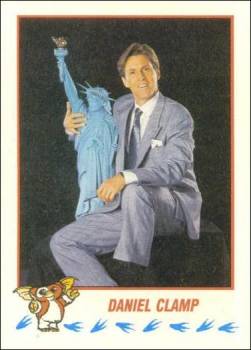 Not to say, of course, that Dante chucked the first movie out the window. Gremlins 2: The New Batch begins similarly to the first: a white male enterpriser waltzes into a Chinese novelty shop on a bright sunny day in beautiful backlot New York and looks to strike a deal. This time, instead of a hard-luck inventor, it’s the food chain’s very top: Clamp Industries, a billion-dollar real estate/cable corporation modeled after the industries of Donald Trump and Ted Turner (in a recent interview, Dante told us: "At the time, we had no inkling that the name of Donald Trump was going to resonate in the way that it has... I don’t know that if we had known what was going to happen, [we'd] make him as sympathetic as we do.") Mogwai is still not for sale, but they’re after the property, which will free up as soon as the proprietor croaks. That’s a more cynical note for Gremlins 2 to embark upon, but hey, it’s a New York movie, right? Even as this was at the tipping point before New York found Disneyfication—the film eventually references Disney’s own town of Celebration—the tone is brighter and, despite its PG-13 rating, more kid-friendly; Gizmo, retrieved by Clamp’s resident scientists, reunites with Billy (Zach Galligan) and Kate (Phoebe Cates), who work in the Clamp Tower in Manhattan, full of contraptions and innovations that, like Billy’s dad’s stuff, don’t work at all. And if you remember the rules, there is only one route for the film to go.

Well, not really. Though (spoiler alert) there is exposure to bright light, and water, and midnight snacks, the Gremlins here are bigger, meaner, and scarier than the first batch. Credit SFX guru Rick Baker, with The Exorcist, An American Werewolf in London, and Thriller already under his belt, for producing such memorable additions as a Bat-Gremlin, Spider-Gremlin, and Greta, perhaps the first and only Trans-Gremlin. One could say these were made specifically for toys, as sequels are wont to do, but the film slyly winks at that. In fact, there are so many asides and in-jokes and Easter eggs that to describe the film even further would involve me making a list of what’s best about it, and that wouldn’t be fair. Though it resembles a sequel in terms of character resurrection and plot structure, Gremlins 2 parades its guest stars and pop-culture references and total anarchic spirit in a manner that has yet to be bested.

Considering how careful and eager-to-please most studio films are today, it’s time you put your time and money in the hands of a goofy madman. Nevermind Clamp’s similarities to Trump; John Glover portrays the mogul with an ambitious, restless, and lovable charm that more closely resembles Dante, even if being compared to a childish blowhard with delusions of grandeur seems unflattering. Unlike Clamp’s faulty tower, Gremlins 2 runs amuck with a purpose.

Today’s audiences are so used to getting carbon copies of what they’ve already seen before, it’s important to hold onto, and share, the treasures that can inspire minds to follow their vision. Dante knows this, which is why he built a career out of paying tribute to the possibilities of cinema. It’s an endless vortex that continues to surprise, delight, and move. Gremlins 2: The New Batch is a tribute to the energy of a joyfully manic collective, both onscreen and in the audience, for it is that which makes us go back to the movies and hungry for more.

Luckily, Dante and BAMcinematek have taken care of that for us; immediately following Saturday’s screening, at no extra charge, is a secret film that I cannot reveal, but rest assured it is very much in the vein of Gremlins 2. Even if you miss that, there is still an opportunity to see Gremlins 2 two weeks later, so if I were you, I’d go both nights. It’ll be worth it.

#bam
#gremlins 2
#joe dante
#original
Do you know the scoop? Comment below or Send us a Tip