The public bathroom-to-person ratio in this city is categorically Not Good. How often have you found yourself in Midtown in need of some urethral relief, only to discover that the nearest Starbucks's restroom is "out-of-order." YEAH SURE. The good news is, this city is full of "secret" bathrooms that will save you from suffering a bladder or bowel-related meltdown in the middle of the street, Bridesmaids-style. Here are our favorites—leave your preferred pee-spots in the comments. 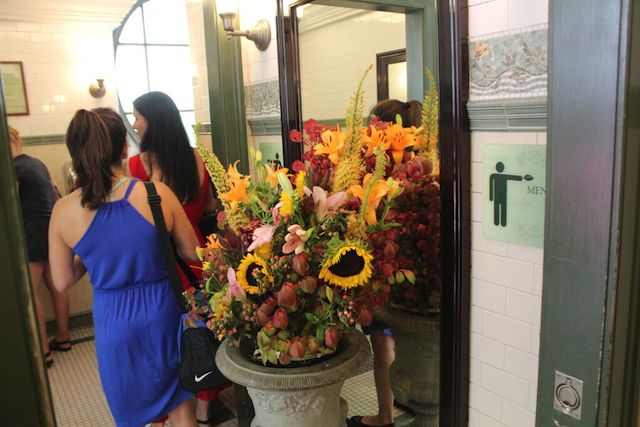 BRYANT PARK: Bryant Park's public bathrooms came out on top both through a preliminary poll on social media and one at Gothamist HQ, and for good reason. The restrooms here are GORGEOUS, boasting marble sinks, fresh potted flowers, mosaic-tiled toilets, high ceilings with crown-molding, and they're incredibly clean—Bryant Park employs a full-time attendant to make sure the plebians aren't leaving wet paper towels and offending smells behind (for long).

The Bryant Park bathrooms are located at Bryant Park between 40th and 42nd Streets and Fifth and Sixth Avenues.

APPLE STORES: Apple Stores aren't just excellent "secret" places to charge your phone—those cubes have got super-clean, super-handy restrooms hidden inside, and you don't have to purchase an iPad to use them. The SoHo Apple Store's bathroom comes highly recommended, as does the Meatpacking District location and the flagship at 59th Street, though you might have to fight a few tourists there for a toilet.

There are a number of Apple Stores throughout Manhattan but as for our favorite bathrooms, the SoHo store is located at 103 Prince Street between Greene and Mercer Street; the Meatpacking District store is located at 401 West 14th Street at Washington Street; and the Fifth Avenue flagship is located at 767 5th Avenue at 59th Street. 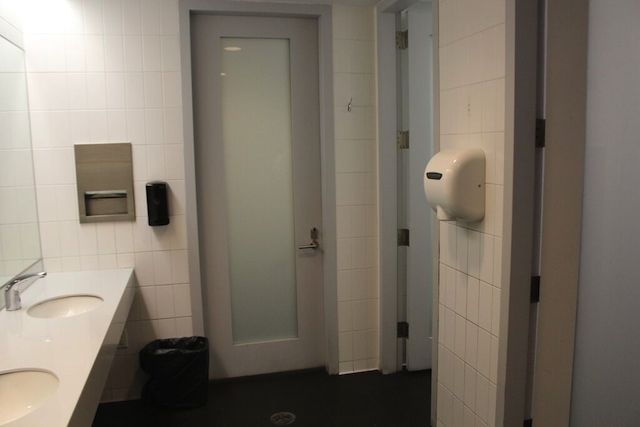 THE DAVID RUBENSTEIN ATRIUM AT LINCOLN CENTER: The Upper West Side's stretch of Broadway is a very good place to need a bathroom—if you've missed the Barnes & Noble but can't make it to the Time Warner Center, Lincoln Center's public space on 62nd Street is the place to pee. Bathrooms here are free and spotless, and no one will give you a shifty look when you waltz in. Bonus points: there's free Wifi throughout the Atrium, so you can tweet on the toilet data-free if you so choose.

The David Rubenstein Atrium at Lincoln Center is located at 61 West 62nd Street between Broadway and Columbus Avenue on the Upper West Side (212-875-5350).

BARNES & NOBLE: The Barnes & Noble on West 8th Street was my bathroom savior for years before it shuttered, and though that particular collection of stalls will no longer aide the bladder-filled in Greenwich Village, its remaining brethren still boast excellent restrooms for those in need. Nell Casey warns that the Union Square iteration is "not great," but the Upper East and West Side stores' offerings are excellent, as are the restrooms in Tribeca and Park Slope.

Barnes & Noble has a (dwindling) number of locations in the city; visit their website for more information.

ATLANTIC AVENUE TERMINAL: The LIRR terminal on Atlantic Avenue isn't much to look at from the outside, but inside it boasts a very welcome restroom for subway or train commuters with a sudden need to go. Since so many trains connect at the Atlantic Avenue-Barclays Center stop—the 2, 4, D, N, Q, 3, R, 5 and B, to be exact—you can relieve yourself in the midst of a long journey to Crown Heights, or Coney Island, or Upper Manhattan or the Bronx, or even the far, frightening reaches of Long Island, if you so choose. The restrooms are surprisingly clean and serviceable, as opposed to a few other subway bathrooms that are best avoided, and anything's better than peeing on the train. 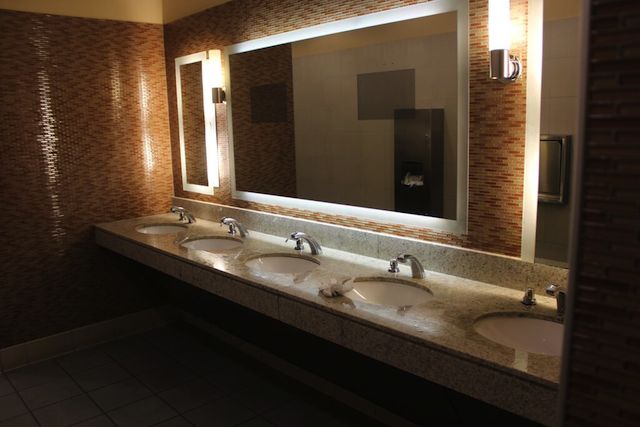 TIME WARNER CENTER: The restrooms at this schmancy Columbus Circle shopping center are my personal favorites, probably because I spent so much babysitting money at the Sephora here post-bathroom in my teen years. The super-clean, massive bathrooms are hidden away on the fourth floor—they are well-kept and well-stocked, and there's absolutely never a line. Be sure to buy some Hard Candy eye shadow for nostalgia's sake.

BEST BUY IN UNION SQUARE: It's damn near impossible to locate a pair of earbuds in this massive electronics store, but if you find yourself in need of a bathroom and don't want to fight with Whole Foods over their fascist lock policy, this is your spot. The restroom here is squeaky clean and practically no one knows it exists, so you don't have to fight with the whole of 14th Street for a stall. Note that the Nordstrom Rack next door is a worthy alternative if you need a runner up. 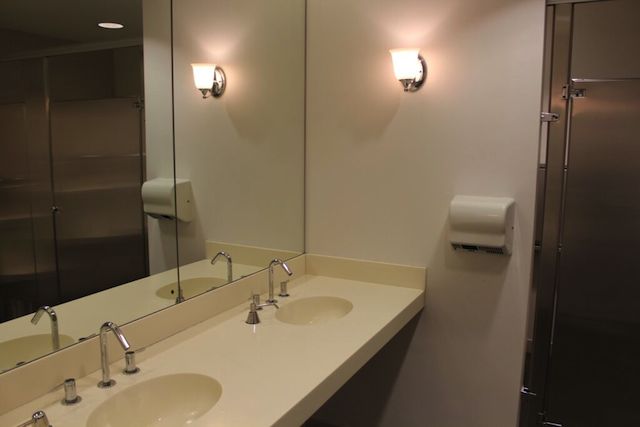 CRATE & BARREL: Lest you think Crate & Barrel is filled with nothing but $2,000 sofas, it turns out the SoHo/Greenwich Village store's got a pretty sweet, super-clean public restroom on the second floor. Though salespeople at many bathroom-boasting stores will glare at you when you make a beeline for the toilet and then flee without buying anything, no one at Crate & Barrel seems to care if you relieve yourself without purchasing a decorative throw pillow. Best of all, the store's got couches for post-pee relaxing, and there are outlets if you need to charge your phone for a spell.

Crate & Barrel is located at 611 Broadway between Bleecker and Houston Streets in Greenwich Village (212-780-0004, crateandbarrel.com).

TENEMENT MUSEUM: A friend of mine who used to live on the Lower East Side swears by the bathroom here, pointing out that it's pristine, open when the museum is, and you don't have to pay museum admission to use them (though it's an excellent museum to check out when you're done!) You can find it just outside the gift shop to the left—walk in like you own the place and get rid of all that LES day-drinking liquid that's been weighing on you since brunch.

J CREW, THE GAP, BANANA REPUBLIC: Some clothing stores keep their bathrooms off-limits to customers, which is understandable considering how hard it is to keep a restroom clean. But a number of bigger brands, notably J. Crew, the Gap, and Banana Republic, have bathrooms in their larger stores, which works pretty well if you're desperate and wandering around, say, Flatiron or Fifth Avenue. The bad news is, these bathrooms are often secreted behind hidden doors, so you'll have to suffer the embarrassment of asking an employee to help you out.

There are a number of J. Crews, Gaps, and Banana Republics located throughout the city; visit their websites for more information. 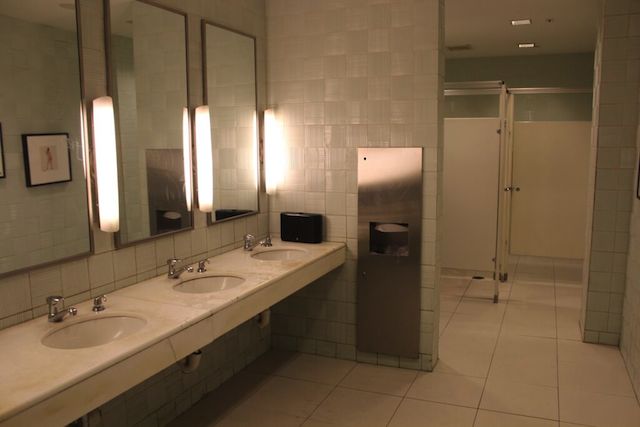 BLOOMINGDALES: It makes sense that the fanciest bathrooms on this list can be found at the city's best department stores, and though it'll take you some time to find one of Bloomingdales' bespoke powder rooms (pro-tip: there's one by the ladies' hosiery section at the Midtown store, and one in the men's department in the basement in SoHo), once you get there, you're in for a treat. The UES bathrooms are SPOTLESS, sweet-smelling, boast individual stalls, and occasionally offer nifty lotions in the ladies' room. SoHo's offerings are slightly less luxurious, but still, a clean place to pee is a clean place to pee.

ROCKEFELLER CENTER: For those awash in the misery that is the Midtown tourist-and-business district, 30 Rock's got a solid set of bathrooms in the basement of its public concourse. It takes a little navigating to find it, but they're huge once you find them, and they're quite clean, considering the bladder-heavy foot traffic coming in from Fifth and Sixth Avenues.

Rockefeller Center is located at 45 Rockefeller Plaza in Midtown (212-332-6868, rockefellercenter.com). 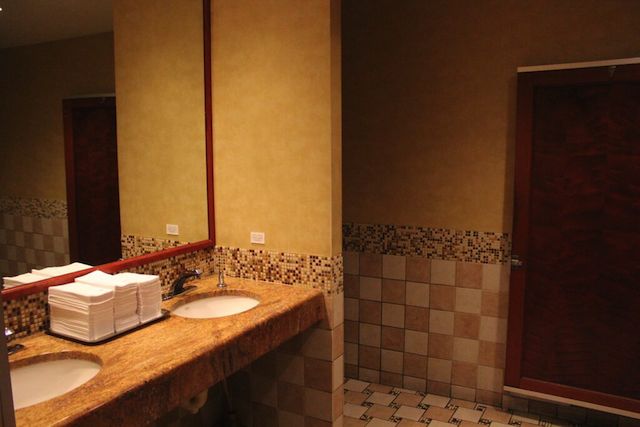 HOTEL LOBBIES: In a city peppered with fancy hotels and few decent pee-stops, it's no surprise that many people have made them one and the same. The key to using a hotel bathroom is to stroll in like you own the place and make a home in a stall, no questions asked—restrooms here are less trafficked than those in coffee shops and bars, and you don't have to purchase a drink to avoid any employee-driven side-eye. Some favorites include the lobby of the Ace Hotel in NoMad, the Roosevelt Hotel in Midtown East, the W Hotel in Union Square, the subterranean single stalls in the Standard East Village, and the Tribeca Grand in, well, Tribeca. 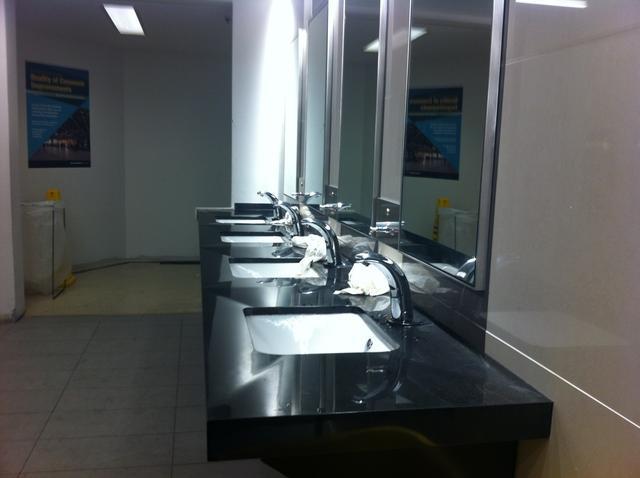 PORT AUTHORITY BUS TERMINAL: You have to see it to believe it, but the Port Authority bathrooms have been newly renovated and are surprisingly clean, considering what the rest of the terminal looks like. Rumor has it that Courvoisier flows from the sink taps to mitigate midnight Greyhound journeys, or maybe that's just something John Del Signore experienced in a fever dream.

Other places of interest: The self-cleaning toilet in Downtown Brooklyn (costs 25 cents), Nordstrom Rack in Union Square, Century 21 on the Upper West Side and in Lower Manhattan. The list goes on and on—for a full list of bathrooms, check out nyrestroom.com, or call up George Costanza for a personal recommendation.

#best bathrooms
#best of gothamist
#best public bathrooms
#original
Do you know the scoop? Comment below or Send us a Tip