Your status as a Real New Yorker™ means that you will inevitably be asked to host a visitor—and to come up with things for them to do once they arrive. Sometimes the visitors are your parents, who have come to criticize your apartment so many times you're running out of places to take them. Sometimes, it's your old college roommate looking for a "real New York experience," even though the realest New York experience involves a lot more delayed trains and expired bodega sandwiches than any tourist wants to endure. No matter who's asking, here are our favorite, non-cliché spots to take tourists (with accompanying restaurants. This is a walking city, and everyone knows walking makes you hungry).

WHERE TO TAKE YOUR PARENTS
They've visited you dozens of times and already seen all the go-to sites (Empire State Building, check; Statue of Liberty, check; Times Square, check, begrudgingy)—but you've got to take them somewhere. 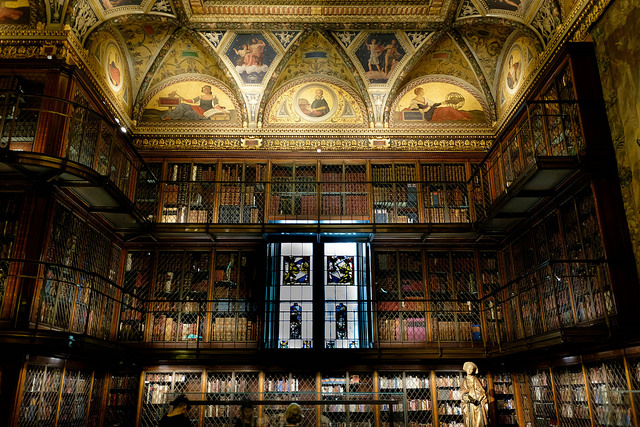 MORGAN LIBRARY & MUSEUM: Despite being both a regional and national historic landmark, this museum is less trafficked than the Met or the Cloisters. Tucked away behind the Empire State Building, the Morgan—yes, named after that Morgan is the embodiment of the best and worst qualities of New York, all in one building: it's beautifully constructed and home to hundreds of books and rare manuscripts, but it's also a celebration of capitalism in its purest, most unequal form. Browse through the rotating exhibitions, peruse J.P. Morgan's private collection, take a seat in his study, and absorb the fact that a real human being used to own all of this priceless artwork—including a handful of Rembrandts and three Gutenberg Bibles.

After basking in the sweet, sweet glow of the free market, head to nearby K-town for some Korean BBQ—Miss Korea is just five blocks away, but there are plenty of other options in the neighborhood for any price point. (If you're intimidated by the immersive culinary experience, check out our handy beginner's guide).

The Morgan Library & Museum is located at 225 Madison Avenue in Midtown. Tickets: $20 (with a few free options during the week) // Miss Korea is located at 10 W. 32nd Street 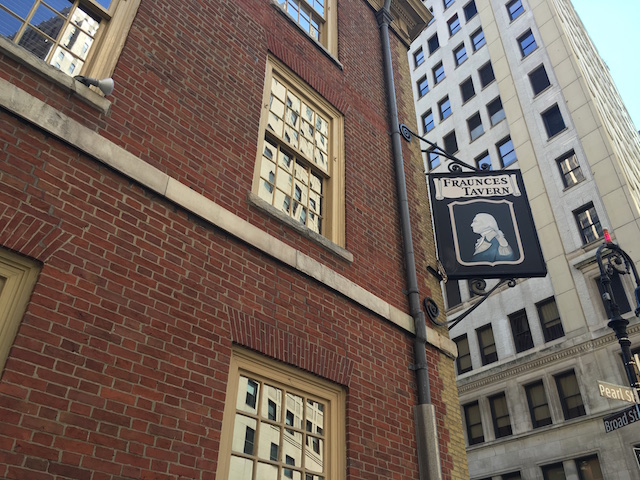 FRAUNCES TAVERN + SOUTH STREET SEAPORT: It's no secret that the Founding Fathers were pretty much always hammered. One of the places they liked to get hammered (and where George Washington based his headquarters and negotiated with the British) was Fraunces Tavern, which is in one of Manhattan's oldest surviving buildings. With a selection of 27 draft beers, 250+ bottles, and 300+ whiskeys, you and your family can get as lit as Ben Franklin in no time. Try the tavern punch, Dawn Of The Union ($15), which is based on an eighteenth-century recipe. There's also a small museum upstairs for history buffs.

Instead of eating at the bar, walk a few blocks north to the South Street Seaport. The Brooklyn Flea runs Seaport Smorgasburg daily during the warmer months, featuring six food vendors including Cemitas El Tigre, Red Hook Lobster Pound, and Lumpia Shack. After snacking on lobster and tacos, take a look at the Peking, the German ship that's been docked in the port for 42 years and is returning to Germany in the spring of 2017.

WHERE TO TAKE YOUR YOUNGER SIBLING (OR FRIEND WITH KIDS)
Traveling with kids can be tumultuous: do it correctly and they'll have a great time; slip up, and they turn into screaming little terrors. These family-friendly activities will keep younger visitors entertained (and will keep you sane, hopefully). 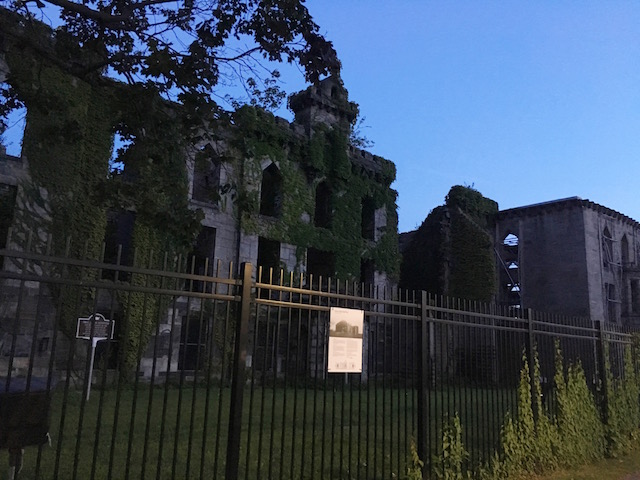 ROOSEVELT ISLAND: A MetroCard swipe is all you need to get to this island in the East River. Opt for the tramway instead of the F train for breathtaking city views during your commute (kids love the view, and adults are pretty into it, too), then walk along the water until you get to the ruins of an abandoned smallpox hospital. If you're traveling with young companions, it's best to do this during the day so they don't have nightmares about smallpox-afflicted ghosts for the rest of their lives.

There aren't a ton of food options on Roosevelt Island—your best bet is to pack a picnic and make a day of out of it. Watch the sun set across the East River, then take the tramway back to Manhattan and make a pit-stop at Serendipity 3. It's kind of a tourist trap, but the easiest way to bribe kids into behaving is by promising them sugar-laden beverages. Don't bother getting any of the food (you'll be full from your picnic); just get the frozen hot chocolate and call it a day. 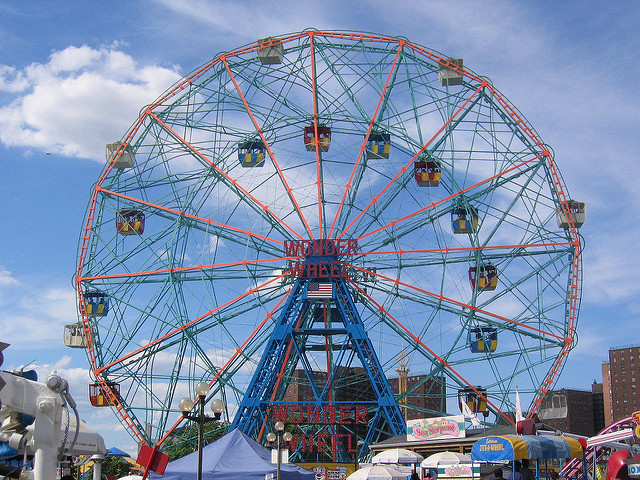 CONEY ISLAND: There are a lot of Coney Island haters in the world, but I am not one of them. To hate Coney Island is to hate fun, to hate joy, to hate trashy carnival games and sticky cotton candy. To be fair, there are times in which Coney Island should be avoided—namely, on summer weekends, when it's so packed you'll spend hours waiting in line for a single ride or trying to stake out a spot on the beach. But tourists are unique in that they can go wherever, whenever. Take your tourist friend and their kids to Coney Island on a Monday morning. Luna Park is open every day from noon to 11 p.m. at the earliest, so you'll have plenty of time to take it all in.

Afterwards, stop by Gargiulo's for old-school Italian fare. The menu includes everything from complex dishes to simple plates like spaghettini with garlic and oil ($11), and the servers are all decked out in tuxes, which is a great contrast from Coney Island's carnival feel.

WHERE TO TAKE YOUR FRIEND WHO'S NEVER BEEN TO NEW YORK
This person is basically a blank slate. It's up to you to take them to all the places tourists "must" visit (and to save them from the tyranny of cronuts and Times Square). 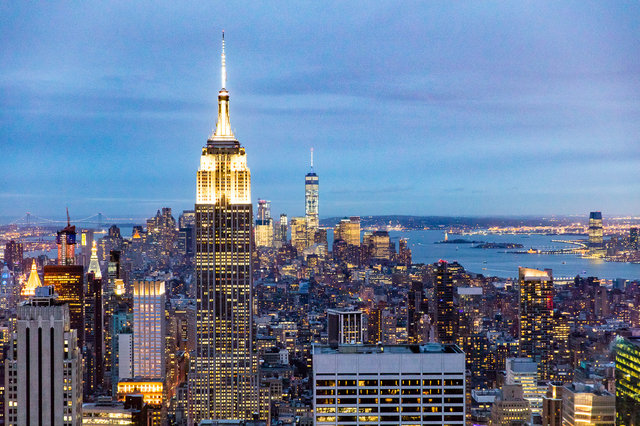 TOP OF THE ROCK: Your friend will presumably want to go to the Empire State Building. Do not take them to the Empire State Building, or at the very least, don't let them pay to go to its observation deck. It may be the most iconic building in NYC, but if anything, that means you should climb atop a different skyscraper instead—otherwise you won't be able to see the Empire State from your vantage point. We humbly suggest the Top of the Rock: it brings you 70 floors above Manhattan and includes three indoor and outdoor observation decks. If you're willing to shell out the extra cash, a Sun & Stars ticket ($47) lets you visit the deck twice in one day. (If you do this, come first thing in the morning and at night for two shockingly different views). Otherwise, come right before sunset. It'll be crowded, but the view of the city during magic hour is unbeatable.

Skip all the overpriced dining options in Rockefeller Center—for a cheap-yet-satisfying meal, check out the Halal Guys truck (it's usually located on 53rd and 6th Ave, but the location sometimes changes). If you let your friend leave New York without trying halal at least once, you're a terrible friend and should be ashamed of yourself.

The Top of the Rock Observation deck is located at 30 Rockefeller Plaza. Tickets start at $32 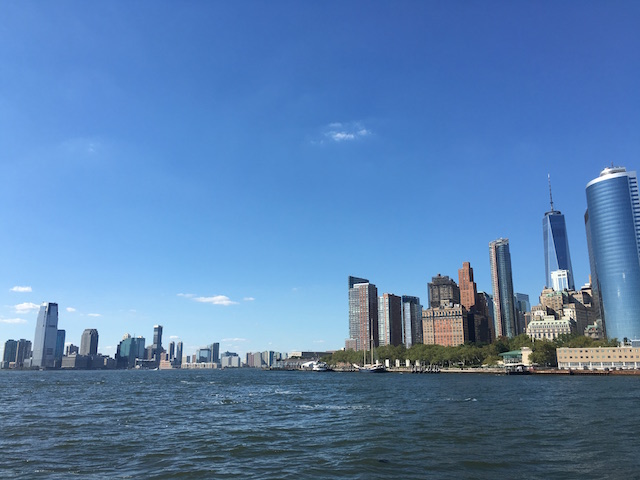 STATEN ISLAND FERRY: Unless your buddy bought tickets to Liberty Island far in advance, there's no way they'll be able to get inside Lady Liberty's head. If they just want to take a look at the emblematic statue, there's no reason for them to go to Liberty Island when they could hop on the Staten Island Ferry for free instead. Sneak some beer on to the boat (it's not actually "sneaking" since you can drink on the ferry, just don't pay $9 for mediocre light beer), buy some popcorn, and take in stunning views of Lower Manhattan and the New York Harbor.

You'll be tempted to hop back on the Ferry—don't do it. Leave the terminal, catch the S94 or S44 bus to Denino's, and buy yourself a cheese pie with a side of calamari. Sure, there are locations in Manhattan, but the OG location is the real deal. If you have room for dessert, Ralph's Famous Italian Ices is less than a block away (and right in front of the bus that takes you back to the terminal). If you go back to Manhattan after rush hour, you'll enjoy a nearly empty ferry and a perfectly full stomach.

WHERE TO TAKE YOUR FRIEND WHO HAS BEEN TO NEW YORK
This tourist is the middle section of a Venn diagram of your parents and your friend who's never been to NYC. They've seen the sights and want to do something new, but they're also open to more eclectic options. 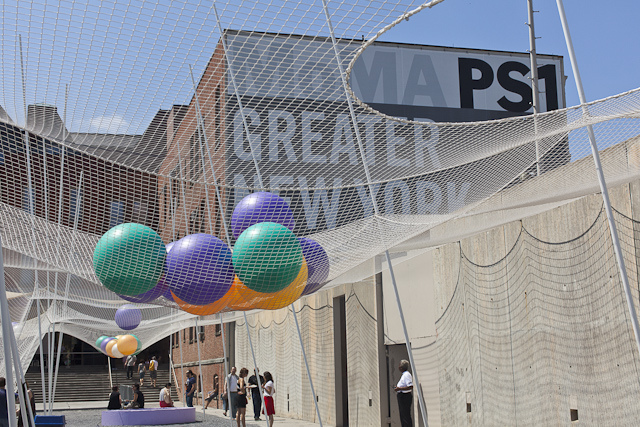 MoMA PS1: PS1, located in a refurbished elementary school in Long Island City, is the MoMA's younger, cooler (and less crowded!) cousin. Since it's in Queens, there are plenty of tourists who will write it off as being "too far." Don't let your friend be one of those people—it's just a quick 7 train ride away. In addition to being cheaper and less densely-packed than the MoMA proper, PS1's site-specific installations offer a far more immersive experience than most other museums in the city (Meriem Bennani's "FLY," for example, featured a fly that sung Rihanna hits). During the summer, the museum hosts Warm Up, an experimental outdoor music series.

When you're done walking through the exhibitions and asking your friend if they "like, get it?", leave the museum and walk a few blocks to Jora, a Peruvian restaurant and bar that serves up both authentic and fusion cuisine. No matter what you order, you have to try at least one kind of ceviche, the anticuchos (grilled veal heart, $10), and a pisco sour ($8 during happy hour). PS1 closes at 6 p.m. on most days and Jora's happy hour goes until 7, so they make a perfect pair. 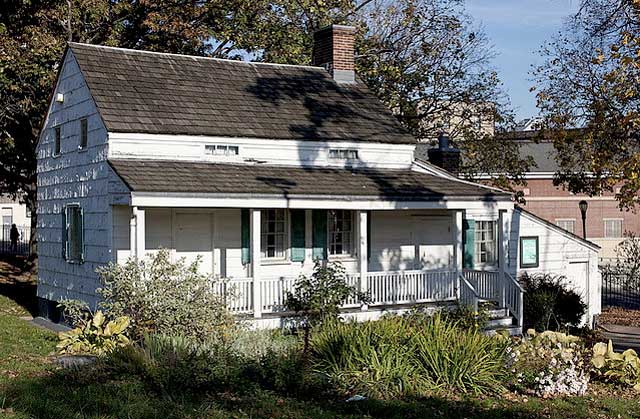 POE COTTAGE: New York today has very little in common with the New York where Edgar Allan Poe spent some of his last years, but a few vestiges of the past remain. Poe came to Manhattan in 1844 and moved to a small farmhouse in the Bronx two years later, where he wrote some of his best works (Annabel Lee is my favorite thing he's ever written, so maybe I'm biased). For just $5, you can take a tour of Poe's old haunt, which was preserved by the Bronx Historical Society after almost falling into disuse.

The neighborhood has changed quite a bit in the nearly 200 years since Poe left—for starters, it's now home to a vibrant Puerto Rican community. After your brief trip back in time, come back into the present at 188 Bakery Cuchifritos, where you can feast on pork dishes including chicharrones (fried pork skin), morcilla (blood sausage), pernil (pork shoulder), and fried sweet plantains.