Fall is without a doubt the ideal season for hiking—the air is crisp enough to stave off sweatback, and the leaves do a neat thing with colors before they curl up and die, littering piles of crunchy leaf-corpses at your feet.

While any jaunt to nature outside the city is good for the soul (and brain!), here are a few of the best hikes you can enjoy nearby. As always, leave your favorites in the comments.

Note: All directions are tentative; always bring a map and check train times and directions before beginning your journey. 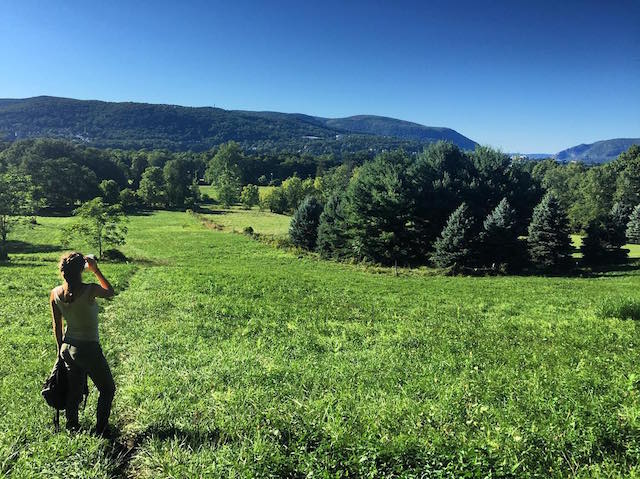 SUGARLOAF HILL/OSBORNE LOOP: One of the spectacular benefits of living in New York City is Metro-North, which makes a last-minute flee from the filthy pavement and crowds ineluctably easy to pass up. Take the Hudson line to Garrison, where you can enjoy the terrain around Sugarloaf Hill, which is part of the Hudson Highlands. Once off the train, a trailhead at the southern end of the parking lot takes you past some ruined brick buildings and over a wooden footbridge. The trail diverges at multiple points, but if you’re looking for a full-day hike, stick with the white-blazed Marcia’s Mile, which will eventually lead you up to the Garrison Institute. Set in a beautiful old monastery, several minutes spent on the Institute’s website have done little to help me understand its purpose. Still, its employees are incredibly friendly, and will offer you a basic map if you’ve forgotten yours, which you haven’t.

Once you leave the Institute, head toward the distant water tower and (carefully) across Route 9D. Enter Wing-Wing Road at the sign for Castle Rock Unique Area and tromp across the field until you reach another trailhead. From here, there are multiple routes available to you, demarcated by some combination of blue, yellow, red and white blazes. As ever, bring a good map and a compass, though the only real threat of getting lost is to follow the white blazes too far south, since white denotes the Appalachian Trail. The Osborne Loop, which adheres to some combination of blue and red blazes, is a mid-level hike that takes around five hours, affording occasionally spectacular views of the valley below and, toward the end, the imposing West Point military academy.

There’s not much by way of post-hike dining options available off the train, so take it one stop up to the adorable town of Cold Spring, where restaurants, bars and apothecaries abound. It’s an incontrovertible fact that beer never tastes as good as it does after a hike, so have two. 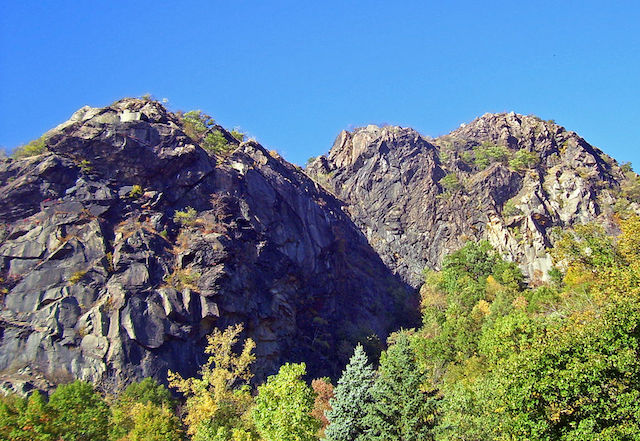 BREAKNECK RIDGE: Breakneck Ridge is the bread and butter hike of carless wanderers thirsting for the great outdoors. Be aware that Metro-North only stops here on weekends, though the trailhead is a painless cab ride (or mile walk) from Cold Spring, which runs daily. One of the great benefits of this hike is the soaring feeling of accomplishment that comes from traveling a relatively short distance (around 4 miles), since the trailhead starts at river-level and spikes sharply upward for around 1.5 miles.

Gasp and scramble up the rocks—be careful with your hands, some of them are sharp—for around 1,500 feet. Once that’s over, the blue-blazed trail will join the Breakneck Ridge trail, which you can follow until you reach a fork. Take the left one, and then in around half a mile make another left onto the yellow-blazed trail. In about 1.5 miles, you’ll reach the overlooks.

It’s a slog, especially if you’re a desk-bound stick of butter like me, but the view at the top is worth it. Catch your breath and take in the incredible, sweeping views of the Hudson River, enjoying in particular Storm King Mountain across the way, Bannerman Castle on Pollopel Island to the north and, if it’s a clear day, the Manhattan skyline.

This is a moderate to difficult hike, so prepare yourself accordingly. No flip flops. 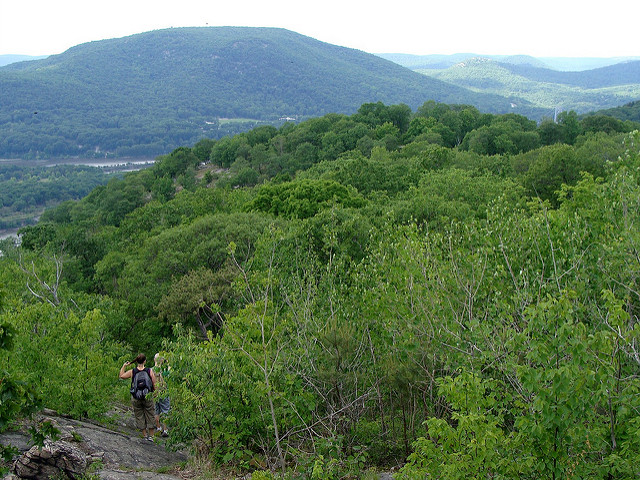 ANTHONY'S NOSE: Anthony’s Nose doesn’t require the same gnarly climb as Breakneck Ridge, but it’s nevertheless nothing to sneeze at. (GET IT? Sorry.) If you’re looking for a hike that will afford you stunning views on a time-budget, you’re hard-pressed to find a better one than this.

Anthony’s Nose has been known as such since 1697, the year it appeared on a grant patent. It’s unclear who the “Anthony” is in this scenario—some say St. Anthony, since “St. Anthony’s Face” was the name of a rock formation on nearby Breakneck Ridge before it was destroyed. Others say it refers to a pre-Revolutionary War sea captain named Anthony Hogan. Legend has it that as Hogan and his crew sailed by, someone caught sight of the peak and suggested it looked like the captain’s nose. It’s unclear whether he was subsequently tossed off the ship and left to drown in the churning waters, but in either case, today it joins Dunderberg Mountain to comprise the South Gate of the Hudson Highlands.

Start at the Appalachian Trail coming off of Route 9D, following the white blazes as they guide you up the well-placed rocks almost directly skyward—don’t worry, the steep part lasts for less than a mile. Continue to follow the white blazes of the Appalachian Trail—or don’t, but be damn careful not to get lost, I will not have you perishing in the wilderness on my watch. Hang a right at the blue-blazed Camp Smith trail and enjoy a pleasant stroll—the hike portion of your ordeal is over, having given way to flat, gentle terrain.

Once you’ve reached the top, take a load off and enjoy the view of the Bear Mountain Bridge, which stretches over the Hudson like a tautly pulled ribbon. Smile while you eat your sandwich, pitying the car-encased slobs as they inch across in their vehicles, for they are not truly free.

On the weekends, you can reach Anthony’s Nose by taking Metro-North’s Hudson Line to Manitou. The trailhead is about a mile and half walk from the station. 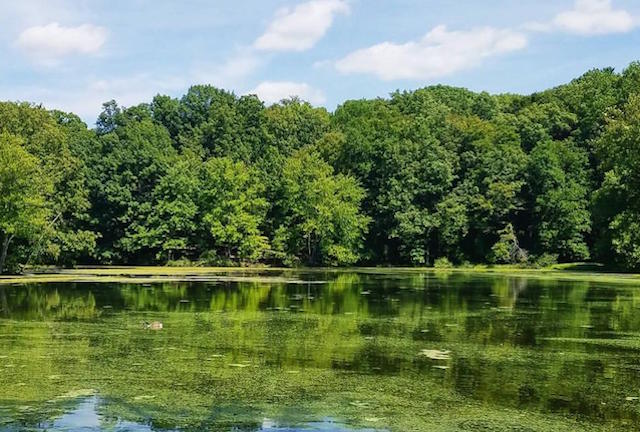 BLUE MOUNTAIN RESERVATION LOOP: Blue Mountain is one of the largest parks in Westchester, and it’s a beauty. The Blue Mountain Reservation itself is 1,583 acres, and encompasses all sorts of outdoorsy goodies like picnic areas, fishing, archery and shooting ranges. The loop is around five miles and allows hikers a pretty good taste of what the mountain has to offer.

This hike is moderately easy, and it’s worth mentioning that dogs and mountain bikes are allowed here, too. Bring one or the other (or both!) if you’ve got ‘em, and if you don’t, beware that you’ll have to share the path, especially on weekends. Keep this destination in mind for winter as well—it’s a great place to cross-country ski. In the warmer months, though, you’ll experience a nice diversity of terrain—ponds and streams hold a bushel of fun wildlife like bullfrogs and turtles (beware of snakes), and a dense forest filled with maple, oak and beech trees.

To get here, you can take Metro-North’s Hudson Line to Peekskill, though it’s a bit of a walk to the trailhead. If you’re driving, follow the signs for Parking Area 3. If you decide to hoof it from the train, reward yourself with a post-hike beer at the adjacent Peekskill Brewery, which also boasts a solid dinner menu. Go ahead, get the poutine AND the carnitas nachos. You’ve earned it. 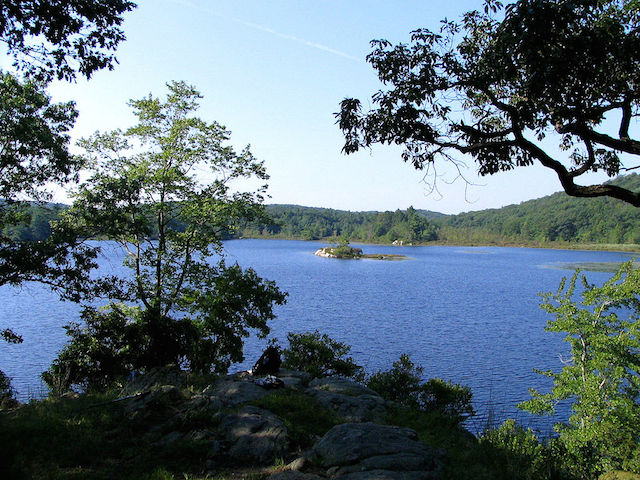 LAKE SKONOTO LOOP: The Lake Skononto Loop is a relaxed, 5.5 mile hike that traverses around lovely Harriman State Park, accessible by Metro-North on weekends by hopping off at the Tuxedo stop. The trailhead is about a half mile north from the station—walk to E. Village Road (because you can never truly escape the East Village) until you hit Grove Street, which will take you to the trail.

From there, you’ll walk along the Ramapo Dunderburg trail, blazed with red dots on white backgrounds. Look at that lake! It’s so beautiful! Is that a chipmunk? etc. Stop for lunch on the banks of its relaxing waters, and then take the Victory Trail, marked with a blue “V” in a white blaze, until you hit the Blue Disc trail (more blue on white blazes).

This is but one hike available in the expansive Harriman State Park, which boasts more than 200 miles of trails and holds the title of New York state’s second largest park. The land was originally owned by Edward and Mary Averell Harriman, who donated a large part of their holdings in exchange for the government to scrap its plans to build a prison at Bear Mountain. In earlier days, there used to be a steamboat service from Manhattan, which would take city-dwellers up the river for 85 cents round-trip. Those days are over, but the lake remains just a short jaunt from the city.

#best hikes
#best of gothamist
#hikes
#hiking
#original
Do you know the scoop? Comment below or Send us a Tip