In the age of the disposable employee, with a further reduction in what remains of workplace protections seemingly likely, it would seem like an ideal time to make a movie about a corporation that literally requires its employees to kill each other for some reason. That was the promise of the recently-released The Belko Experiment, but despite a premise that could get anyone who's been convinced of their boss's nefarious aims to buy a ticket, the movie chickens out on its own implications.

SPOILER ALERT: many spoilers ahead

The premise of The Belko Experiment (in theaters now) is simple enough: 80 employees of the Belko Corporation, a company that's supposed to help American employees move overseas, find themselves locked in their office building in Colombia and instructed by a mysterious voice to kill two random co-workers, and then thirty more. Oh, and to make sure everyone complies with the kill orders, it turns out the trackers placed in people's skulls (they have trackers in their skulls) that were allegedly put there for insurance against kidnapping are really tiny bombs that can be set off remotely to ensure the killing starts taking place.

The film doesn't waste much time getting to the murder, with no discussion really about what the company's work really entails or a deep look at the people doing it. After two early random head explosions show the employees that the voice is serious about the demand for blood, the question of whether to kill or not to kill divides the office along a few battle lines and the mayhem really begins.

And there's plenty of mayhem to be had. Whether you want to watch someone get shot, crushed by an elevator, hit in the head with a big wrench, set on fire or other manner of grisly deaths, you'll get your fill of it. If you want to watch John C. McGingley play a lecherous creep who eventually gets his head caved in with an axe, or see Michael Rooker get some much-deserved work, you'll have a good time. In a couple of instances—the most explicit one being a few management types led by COO Tony Goldwyn gathering employees in the lobby and shooting them in the back of the head in a very gruesome analogy to layoffs—the movie approaches a critique of a system where management views human lives as just line items on a balance sheet. 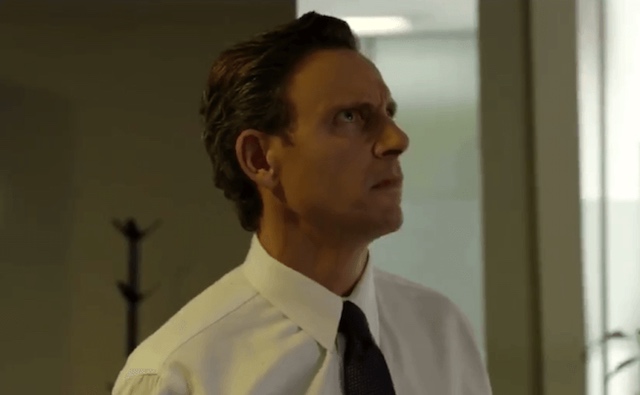 When you're ready to take care of some redundancies...by any means necessary.

Especially in a world where at-will employment is pitched to you as a good thing because of the alleged freedom it provides you, a film that makes management into the Grim Reaper has a chance to really resonate. But none of the employees direct their anger toward the Belko Company itself. The only time someone asks why this is happening, the movie's protagonist, Mike (John Gallagher, Jr. doing an off-brand Jim from The Office), darkly suggests the Colombian government is just using Belko as a front for some kind of weird experiment.

His guess is more or less on the money, since after walking out of the building as the only survivor of the day's murder games, it's revealed that a group of social scientists are conducting Belko Experiments all over the world for poorly defined reasons. This copout ultimately makes The Belko Experiment a kind of office park Cabin in the Woods, but at least that movie had the wonderfully strange explanation that all the bloodshed we just watched keeps the Old Gods from rising and destroying the Earth. Going with a global conspiracy run by scientists is a full speed retreat from a more relevant suggestion for the murder, like a grinning HR person explaining that this is just an easy but unfortunate way to cut costs.

There are lessons to take away from the movie, like, "Never take your employers at their word that something is for your own good," "organize or die" and "how does anyone tell Tony Goldwyn apart from William Fichtner," but otherwise the movie's embrace of senseless unquestioned killing drains it of a lot of power. The Belko Experiment could have been another The Purge: Anarchy, which gave us blood but also gave (an admittedly ham-fisted) critique of the ways that authoritarianism and austerity are used against the poor. Instead it's just another splatterfest (with admittedly good splatter).

#movies
#murder office
#the belko experiment
#original
Do you know the scoop? Comment below or Send us a Tip