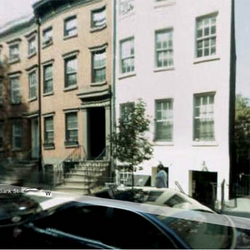 First up on their tour: John and Yoko’s first NYC apartment at 105 Bank Street (where they lived during the release of this album). Here's a closer look at the property, which is also shown at right.

In 1971, after a long stay at the St. Regis Hotel, John Lennon and Yoko Ono moved into a tiny pad owned by Lovin’ Spoonful drummer Joe Butler. This was during Lennon’s most political period, and he often hosted gatherings at the apartment that drew counterculture figures like Abbie Hoffman and Jerry Rubin. Lennon also demoed much of his Some Time in New York City album in this spot. After 18 months, though, John and Yoko moved on up, to the Upper West Side apartment building called the Dakota.

Other places on the trip down memory lane include The Dakota (1 West 72nd Street) where Yoko Ono still lives today, the Ed Sullivan Theater (53rd Street and Broadway) where The Beatles played to an audience of 74 million on February 9th, 1964 (#1 in the 100 days that changed music).

The Plaza at 2 Central Park South ends the tour. In February 1964 the Beatles began their American journey there and ten years later they attempted to reunite in the same spot to sign legal documents that would formally dissolve their partnership. However "John didn’t show up. 'He wouldn’t come across the park!' Paul McCartney said. 'I had flown in from England, and John wouldn’t show up. George got on the phone and yelled, ’Take those fucking shades off and come over here.’ John still wouldn’t come over. He had a balloon delivered with a sign saying ‘Listen to this balloon.’ It was all quite far out.'"