The Astor Place Cube Is Boxed Up, Being Removed

The iconic Astor Place "Alamo" cube was barricaded off last week as the area was prepped for some upcoming work, and today it was all boxed up. How long until it gets painted/tagged/pried open?

The Astor Place cube is getting boxed up. Last chance to say goodbye to it for a while http://t.co/RAI4gJAeJg pic.twitter.com/CU6exlMtjb

This is part of the Astor Place Reconstruction Project, which will make the area more pedestrian friendly.

According to Bedford + Bowery, "Plywood started going up this morning... A worker on site said the cube won’t be completely boxed up, as the Peter Cooper statue has been over in Cooper Triangle." Here's what the new Astor Place will look like once the work is done: 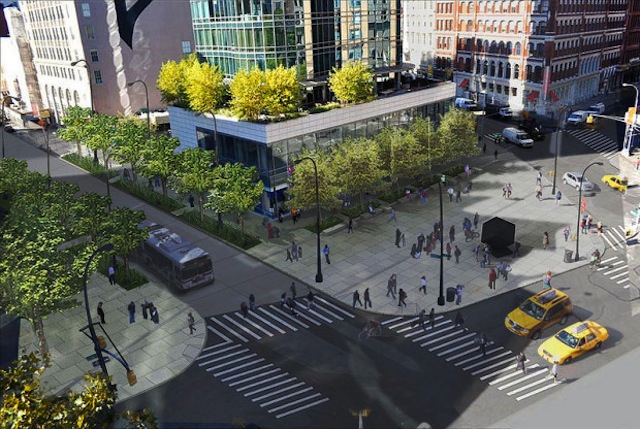 Jim "Mosaic Man" Powers has been protesting the redesign (specifically, the plans to remove nearby lampposts with his work attached to them) by removing his mosaics.

UPDATE: Jonathan Kuhn of NYC Parks tells us, "The protections of Tony Rosenthal's Alamo, or Cube sculpture, are an interim measure until the sculpture is removed off-site for restoration and repainting and out of harm's way while the area around it undergoes reconstruction."

#alamo
#astor place
#astor place cube
#cube
Do you know the scoop? Comment below or Send us a Tip