The Alligator In The Sewer: Evidence Behind NYC's Urban Legend

On a chilly day in 2010 I stood on the steps of City Hall to hold a press conference. Equipped with a proclamation from the Manhattan Borough President and an enlarged clipping from the NY Times, I was there to announce the First Annual Alligator in the Sewer Day, a pseudo-holiday I have been celebrating every year since.

"Alligator Found in Uptown Sewer," read the headline. The piece recounted how some East Harlem teens were shoveling snow down a storm sewer when one of them noticed movement below. He peered into the darkness and was stunned by what he saw. “Honest, it’s an alligator!” he proclaimed to his buddies.

The story did not end well, at least for the animal. The boys lassoed the creature with a clothesline, hauled it up to the street, and when it snapped its jaws, they killed it with their shovels. The carcass weighed 125 pounds and measured seven to eight feet long. A remarkable account, to be sure—but was it really true?

Having studied historical hoaxes, I knew that old newspapers were filled with fanciful tales. Reporters could be bamboozeled, and publishers were not above fabricating stories to goose circulation numbers. For example, in 1874 The New York World horrified readers with a made-up story of a man-eating plant in Madagascar. And in 1835 The New York Sun published faked dispatches from the famed astronomer Sir John Herschel, claiming he had spotted winged moonmen, six-foot tall bipedal beavers, and other curious sights on the moon's surface.

As much as I trusted the Times, a story as preposterous as this one, without any byline, picture, or follow-up articles, gave off a slight whiff of "fake news." So I decided to revisit the incident to see if I could find more evidence to prove—or disprove— the 1935 encounter. And sure enough, I did find more evidence, some of it solid and some of it circumstantial. Taken together, I think it makes a convincing case that the East Harlem gator was real.

Argument #1:There were corroborating newspaper articles.

The NY Times account, I discovered, was not the only metro area newspaper to write about the alligator. At least two other independent papers mentioned it. One, the New York Herald-Tribune, published a story very similar to the one in the Times. That in itself does not prove corroboration. Papers shared stories through wire services like the Associated Press—that’s how the Chicago Tribune, The Boston Globe, The Baltimore Sun, and The Toronto Star got the story—so there still might have been only one dishonest or unreliable writer at the source. But the Herald-Tribune story differed from the Times story on a few notable details, like the exact spelling of the boys’ names and how they acquired their lasso. It’s obvious that the pieces were written by different authors, and that eliminates the possibility that a reporter was pulling a fast one on his editor, or that a paper was pulling a fast one on its readers.

The second corroborating newspaper was the the Brooklyn Daily Eagle. About a week and a half after the alligator story ran in the Manhattan papers, The Eagle published an article about how some incinerator workers on Barren Island, where the animal’s carcass had been taken, had kept some patches of the alligator’s hide as mementos. (What a tantalizing possibility: somewhere in a Brooklyn attic there might still exist a physical remnant of New York’s original fabled sewer gator!) 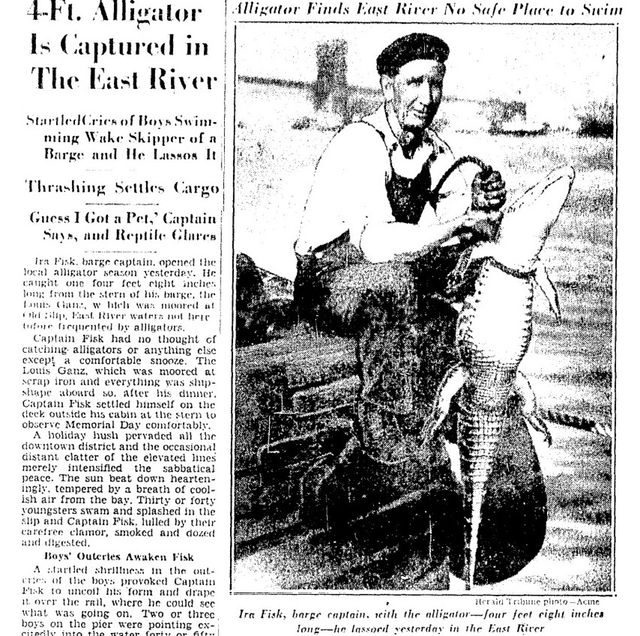 Gator in the East River! (The Herald-Tribune)

As bizarre at it sounds, metro area alligator sightings were not all that rare in the 1930s. In 1932 two alligators, one measuring three feet, were found near the Bronx River in Westchester. And in 1937 a nearly five-foot, 100-pound gator was lassoed off Pier 9 in the East River by a barge captain. According to the account in the Herald-Tribune, "Captain Fisk offered his alligator to the police, but they declined the gift. 'Well,' said Captain Fisk philosophically, 'I can’t throw it back here where the boys go swimming. I guess I got myself a pet.'" An astonishing picture of the captain and his beast was printed next to the story.

Just six days later a two-foot alligator was found crawling on a subway platform in Brooklyn. It was captured by police.

Argument #3 — Baby alligators were cheap and easy to come by 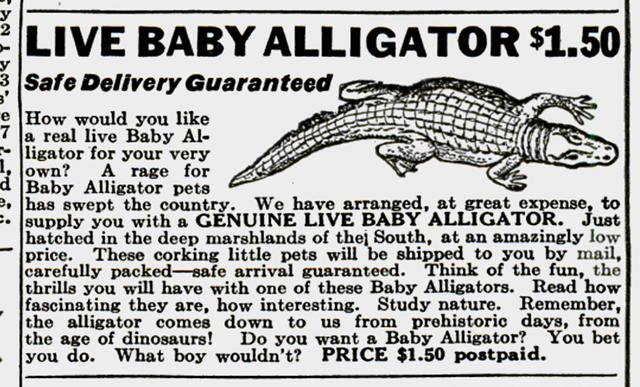 An ad that ran in Popular Mechanics

So how did all these tropical critters get to our northern latitudes? The Times article speculates that the East Harlem gator escaped from a passing boat. But more likely, in my opinion, it was a discarded pet.

At the time of the sewer sighting the back pages of boys' magazines were filled with ads for mail-order magic tricks, practical jokes, and, yes, baby alligators! They cost about $1.50 postpaid. From an ad in Popular Mechanics: "Do you want a Baby Alligator? You bet you do. What boy wouldn't?" (This image shows women packaging up gators for mailing.)

It was—and is—legal to send small, live alligators through the mail. This is not as insane as it seems. Scientists, farmers, zookeepers, and pet shop owners need a low-cost and reliable method to transport small, harmless, living animals. The system was not without its mishaps. Newspapers around the country abound with stories of postal clerks contending with escaped baby alligators in their storerooms.

Then there were vacationers from the big city who would motor to parts south where they would buy cute baby gators as pets or gifts from locals and alligator farms. But alligators don't stay cute forever, and unlike goldfish, their growth is not limited by the size of their container. How to deal with what was essentially a growing pet dinosaur? According to a 1937 article in The Eagle, the solution for Catherine Fitzgerald of Ridgewood, Queens, whose onetime-baby alligator named Oscar was outgrowing her bathtub, was to call the ASPCA.

The solution for others, I suspect, was to dump it in the river. Or leave it in the subway. Or slip it down the sewer.

Mr. Miscione has been the Manhattan Borough Historian since 2006.

#alligators
#Alligator in the Sewer Day
#original
#history
#flashback
#sewer
#gators
Do you know the scoop? Comment below or Send us a Tip