The 9 Best Trivia Nights In NYC

If you’re living in New York, chances are you feel pretty smug about how tuned-in and cultured you are, what with all the museums, galleries, and bookstores right outside the door. But do you care to put those street-and-book-smarts to the test? Whether you’re looking to prove that you could be the next Ken Jennings, eyeing a cheap date night, or on the hunt for some new friends, the city is full of Trivia Nights with all sorts of levels of difficulty and areas of focus. Here are our favorite trivia nights where you can win bar tabs, DVDs, and all sorts of weird tchochkes—or at least go home with a little extra knowledge. 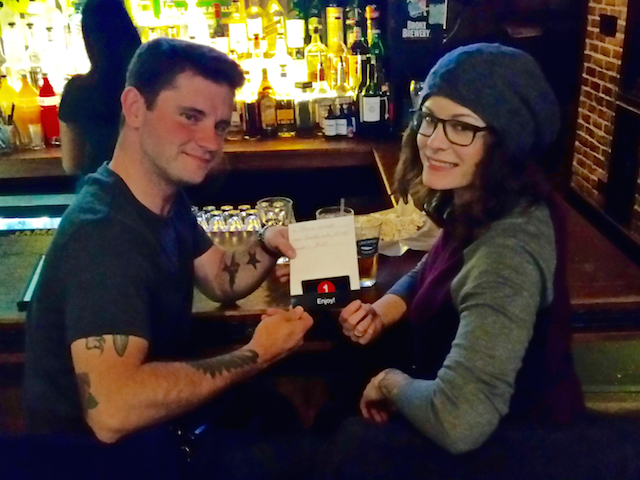 "GEEKS WHO DRINK" AT BRONX ALEHOUSE If you want to beat this large, Sunday-night crowd—with team names like “The Ashley Schaeffer P. Dogs" (pictured) and "Jeffrey Dahmer's Steakhouse”—for the $50-gift card grand prize you’ll need to make it through six challenging rounds of culture, science, history, music and general knowledge facts. Host Louie Russo uses questions crafted by trivia company Geeks who Drink, but if you disagree with his answer, consult with Steve, the unofficial resident fact checker, who often goes head-to-head with Louie via a quick Google search. Make sure to kick back a few of the watering hole’s craft beer selections (Gun Hill, Broken Bow, Stillwater, etc.)—you’ll need the liquid courage to win tie breakers, which include chug-offs, dance-offs, air guitar battles and catwalk-offs. 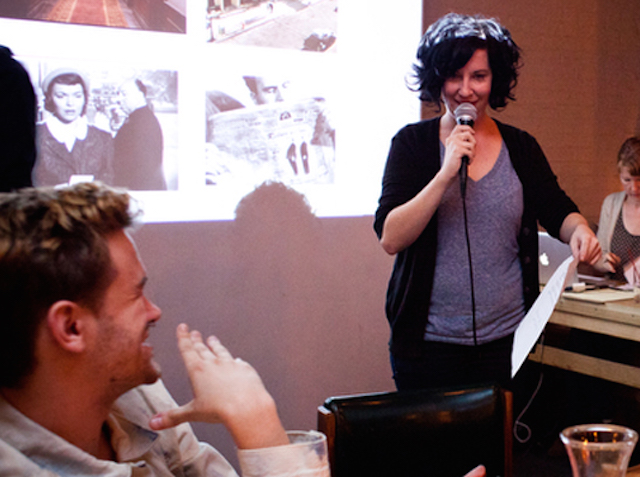 VIDEOLOGY MOVIE TRIVIA: Cinephiles and casual movie-goers alike clamor for a spot at this trivia night, which frequently turns people away at the door to meet fire-safety standards. Hilarious host Maggie Ross and co-host Adam write the unusual questions, with rounds like “Fill-in-the-bleep” where Ross plays a movie clip and bleeps a famous quote, and “movie math problems” that utilize your knowledge of the number of films in a franchise (ex: Die Hard + Pirates of the Caribbean - Naked Gun - Blair Witch X Kung Fu Panda = 12).

Each Tuesday, the winners receive a free round of drinks and the coveted spot in the booth close to the big screen for the next week, but regulars who choose to play the whole 3 month series are competing for use of the bar’s backroom for a two hour private party with a $150 tab. Be sure to come up with a clever team name—some of Ross’s favorites include Jodie Foster's Privacy, Fartin' Scorsese, Air Will Be Bud and Nicholas Cage Fighters. 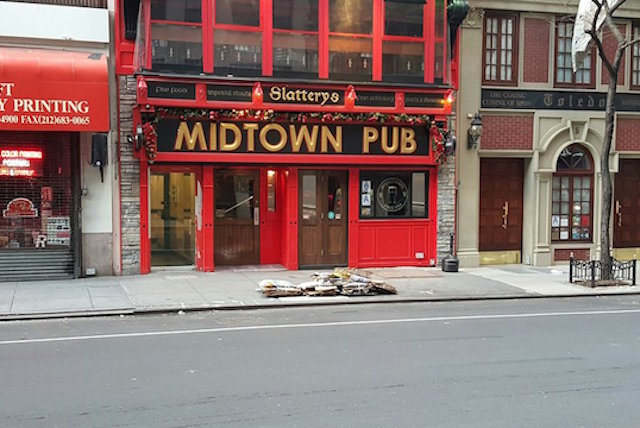 TRIVIA, AD AT SLATTERY'S MIDTOWN PUB If general knowledge isn't quite your thing, but you’re something of a savant when it comes to Gilmore Girls, Harry Potter or Seinfeld facts, let your nerd flag fly with Trivia, AD’s themed nights in bars across the city and New Jersey. The competition for the team that's watched/read/lived-and-breathed the night’s theme is fierce: Hamilton trivia questions pull from the performers’ social media accounts and #Ham4Ham performances while the bonus question at one Friends trivia night “What’s the exact Dewey decimal number where Ross's thesis was located in the library?” was actually answered correctly. All Trivia AD venues are friendly, but I'd recommend going to Slattery’s Midtown Pub for its central location, decent beer prices and invested, but inviting players. 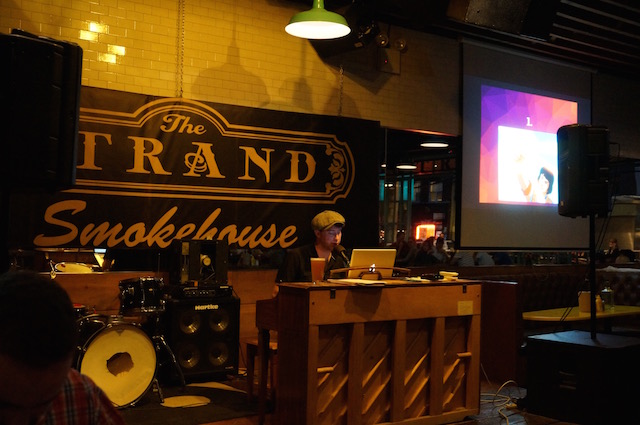 THE STRAND SMOKEHOUSE: Though other places on this list rely heavily on a theme or require near photographic memory, this Astoria meat and bourbon hot spot is something of a people’s trivia. Teams of six people or less grab picnic tables in front of host Kyle Groff and the screen for three rounds of not so challenging, but pretty fun, visual questions. A recent horror movie-related-round was accessible even to my team of horror-hating-scaredy-cats, where two objects appeared on the projections and participants had to guess the film they represented (example: knife plus shower head equals Psycho).

It's pretty easy to cheat (the picnic tables lend themselves well to eavesdropping), but a Jeopardy-twist at the end where you wager your points on a final question means even the best teams can lose the $50 tab, which is good news if you're not a trivia superstar and still want a shot at the win. The runner-up prizes aren’t too shabby either—second place gets a round of shots, while third takes home day passes to Brooklyn Boulders. 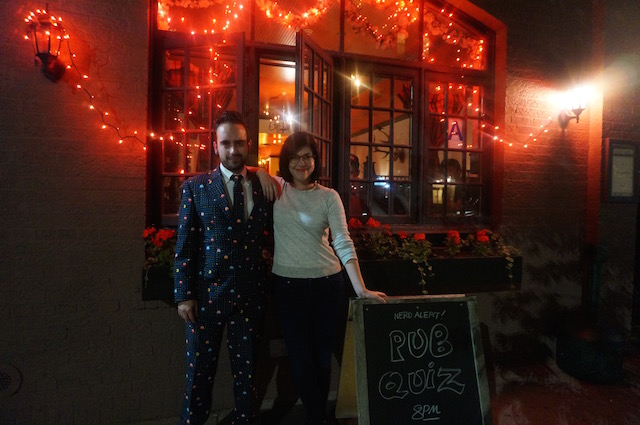 NERD ALERT AT BLACK RABBIT: Small groups of bespectacled Brooklynites gather around the low lamp-lit bar and in booths behind old-timey Western saloon doors to quietly puzzle-out the impossibly hard questions crafted by hosts Brilliant Ryan (Harris) and Young Genius Casey (de Pont). Ryan and Casey are two friends who Ryan (semi) jokes, “came together over the need to feel smarter than everyone else.” The two took over the long-running trivia night six years ago after being regular champion players, and now ask questions like, “Daenerys Targaryen, Mother of Dragons, does not actually have dragons. What mythical creature does she have and how can you tell?” The rounds tend to lean cultural, with plenty of movie and music related head scratchers, but Casey guarantees, “you’ll never get a sports question.”

Black Rabbit is located at 91 Greenpoint Avenue between Franklin Street and Manhattan Avenue in Greenpoint, Brooklyn (718- 349-1595, blackrabbitbarnyc.com). Trivia every Tuesday at 8 p.m. 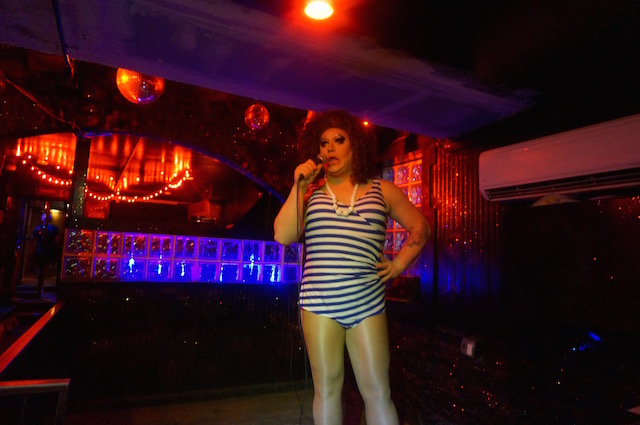 ALOTTA TRIVIA AT METROPOLITAN BAR: This is the only place on this list where the host might wear nothing but a leotard and amazing jewelry. Brooklyn gay bar Metropolitan hands drag queen Alotta McGriddle the mic every Wednesday, with each week taking on a rotating theme—past ones have included Friends, Harry Potter, Mean Girls, and Disney. The questions are easy enough that multiple teams often have a perfect score at the end of the round. In the case of these ties, a representative from each group jumps onstage, where Alotta dishes out some dry sass before asking a lightning round question—tie-or-no-tie, the winner of the round gets a free pitcher of Bud Light and the knowledge that their hours of TV and movie watching have finally paid off.

Metropolitan Bar is located at 559 Lorimer Street between Devoe Street and Metropolitan Avenue in Williamsburg, Brooklyn (718-599-4444, metropolitanbarny.com). Trivia every Wednesday at 8 p.m. if 8 p.m. were actually closer to 9 p.m. 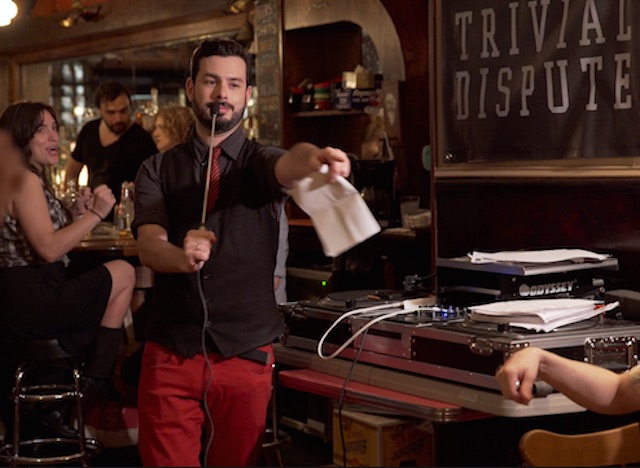 : If the word “free” makes your heart go pitter-patter, than brave the crowds at Alligator Lounge. Not only will the popular bar be serving up its free pizza with every drink purchase (draughts $4 and up), but generous shot rounds get well shots to whoever answers a question first, so you can end up a winner even when your team stands no chance of taking the $30 bar tab. For a particularly difficult question you might even take home Coney Island Brewery merchandise (T-shirts, bottle openers) or, on special nights, concert tickets. Host Adam Kesner, who has the radio-ready voice of a friendly morning show host, also brings a “mystery bag” filled with dollar and thrift store tchotchkes (think Klingon/English dictionaries and Halloween decorations) for teams he feels are worthy of a prize, whether it be for best team name or a stupid-funny wrong answer.

Alligator Lounge is located at 600 Metropolitan Avenue between Lorimer and Leonard Streets in Williamsburg , Brooklyn (718-599-4440, alligatorloungebrooklyn.com). Trivia every Monday at 9 p.m. 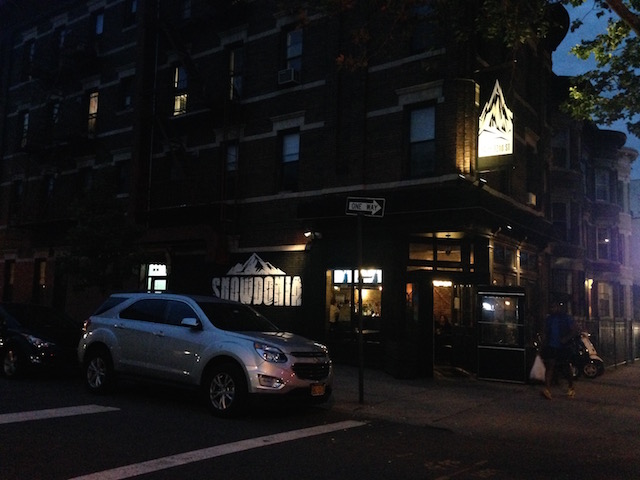 TRIVIA NYC AT SNOWDONIA Between the Strand Smokehouse and Snowdonia, Queens is the best at pairing trivia with a tasty meal—one Snowdonia trivia regular, Jim Peiser, told me, “The burgers are killer.” Teams, which include plenty of couples and decidedly grown-up dinner parties, debate over host Adam Souza’s medium-level-challenging questions, which often include some tricky phrasing. First prize takes home a growler of Narragansett ($4 drafts of the beer all night for winners and losers alike), second gets a round of drinks and, since Snowdonia’s owner is a film buff, the third place consolation is a DVD, usually of a classic film like East of Eden.

GEEKS WHO DRINK AT BAR THALIA: Hosted by the same company behind Bronx Ale House’s trivia night, the weekly events at this spot below Symphony Space have a large following of over ten teams that regularly drop in—one loyal married couple were even there the night she went into labor. The friendly vibes brought out by host Katie Dutton and the bar staff (full disclosure, one of my friends used to sling drinks here) make it easy for single players to join established groups, which is good because nearly every person in the bar ends up playing, and some questions require teams to work with their rivals. The big winners walk away with a $40 gift certificate, second place gets $20 while the rest make plans for the next week.

#best of gothamist
#best trivia nights
#trivia
#original
Do you know the scoop? Comment below or Send us a Tip