The 8 Best Pocket Parks In Manhattan

New Yorkers are lucky enough to have rambling green naturescapes like Central and Prospect Parks, but the small, public-accessible pocket parks that dot the city are an oft-overlooked joy, a temporary respite from the hustle and bustle of the urban artery. For this guide, we're confining our list to Manhattan, where slivers of semi-green space clocking in at 5,000 square meters or so can be found wedged between office buildings in Midtown and beyond. Here are our favorites; leave your suggestions in the comments. 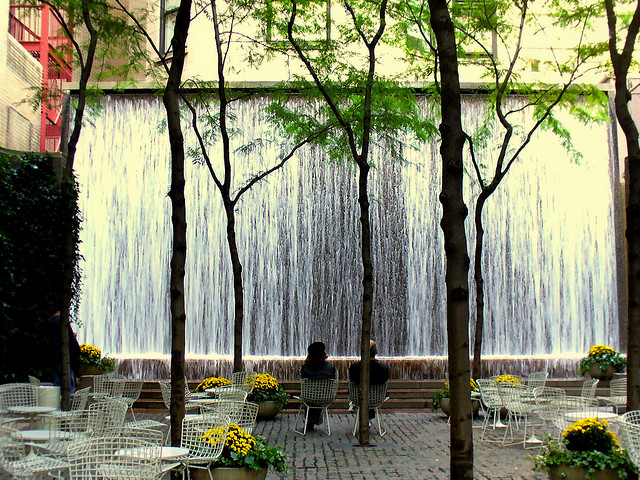 PALEY PARK: This intimate, 1/10 acre space has long been celebrated one of, if not the, city's best pocket parks since it was funded and developed by former CBS chairman William Paley in 1967. Nearly a half-century later, Paley Park's still a lovely spot, with scattered small tables and chairs, ample thin-trunked trees, potted plants and a spectacular 20-foot waterfall that drowns out all the Midtown din. Paley Park is also located just a few feet from the 53rd Street Plaza where remnants of the Berlin Wall once stood, though those have reportedly been removed for restoration.

Paley Park is located at 3 East 53rd Street between 5th and Madison Aves in Midtown East. 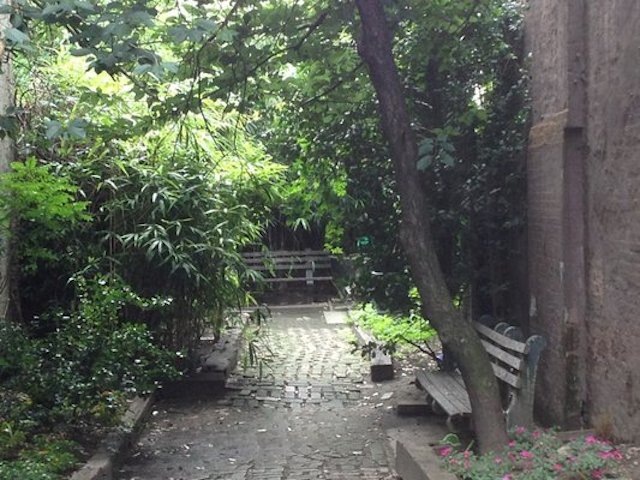 SEPTUAGESIMO UNO: It's easy to miss this minuscule strip of park, sandwiched between two brownstones and hidden behind an open gate on West 71st Street. But behind that gate lies 0.04 acres of lush greenery that line a romantic cobblestone path, shading a few small benches that serve as temporary relief for tired passersby. There's not much to Septuagesimo Uno (71, in Latin), and that's part of it's charm—it's a lovely, understated, unexpected green respite in an otherwise urban space, just like a pocket park should be.

Septuagesimo Uno is located at West 71st Street between West End and Amsterdam Avenues on the Upper West Side. 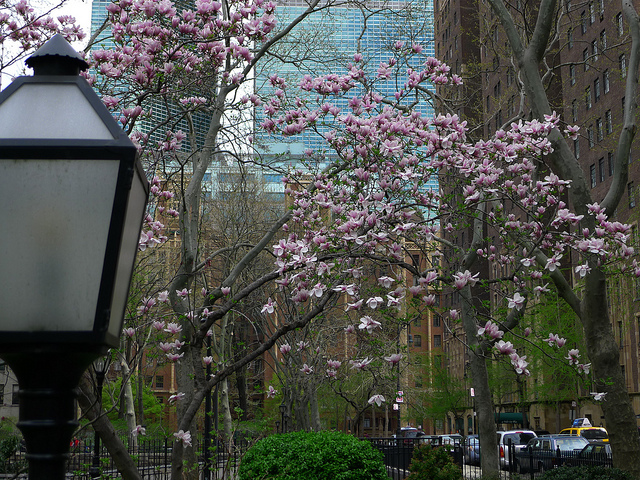 TUDOR CITY GREENS: Tudor City's two small parks sit on either side of East 42nd Street, boasting flourishing old trees, flowers, plants and other much-needed Midtown greenery. There's plenty of seating space here, and the park is decorated with elegant small touches—old-timey lampposts, vintage urns and the like—and though the park is privately owned, it's open to the public from 7:30 a.m. to 10:30 p.m. daily. Bonus points for a killer view of the United Nations building which, while not perhaps the most beautiful building in the city, is still impressive in its own right. 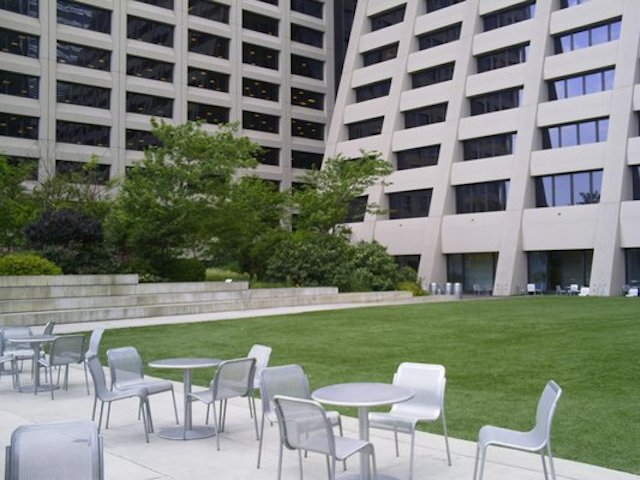 ELEVATED ACRE: This appropriately-named 1 acre spot is a sort of downtown baby sister to the High Line in Chelsea, sitting on a 30-foot deck by the East River and boasting a massive lawn, an amphitheater, plenty of greenery, chic light sculptures and wooden benches. From 8 a.m. to 9 p.m., the public is invited to take in some quiet, sun and a stellar view of Brooklyn Heights across the way—the space can also be rented out for private events and weddings. 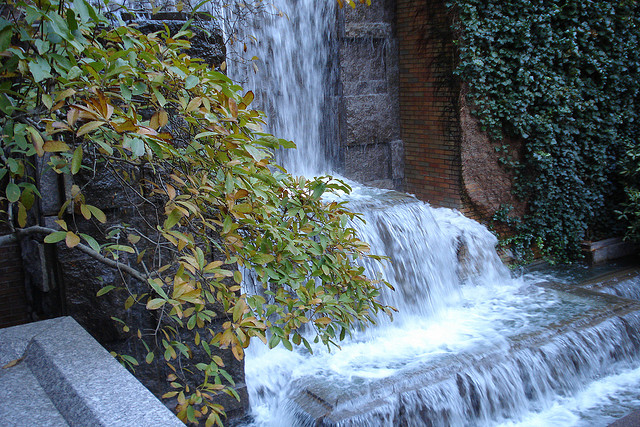 GREENACRE PARK: Greenacre Park, built in 1971, is another one of Midtown's hidden gems. Which, considering it's only 60 feet by 120 feet, is particularly impressive. What this spot lacks in space it makes up for in design, sporting an exquisite 25-foot-tall waterfall (complete with a running stream!), ample seating, lovely greenery, an elegant stone sculpture wall and even a food vendor for passersby aching for a seat and a snack. What is a Second Avenue? 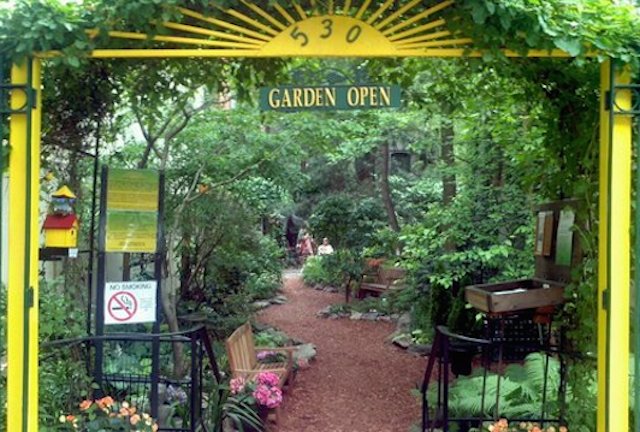 CREATIVE LITTLE GARDEN: This lush East Village nook is part pocket park, part community garden, since it's maintained by volunteers from the neighborhood. And their work has paid off—the spot's well stocked with delightfully colorful flowers, trees and bushes, in addition to sweet little benches, potted plants, old-timey brick touches, sculptures, fountains, birdbaths, a waterfall and a birch-chip path. And if you yearn for chirping non-pigeon birds, this is your place: the Creative Little Garden is a National Wildlife Federation Habitat thanks to its hard work providing avian friends with happy little homes.

Creative Little Garden is located at 530 East 6th Street between Avenues A and B in the East Village (creativelittlegarden.com). 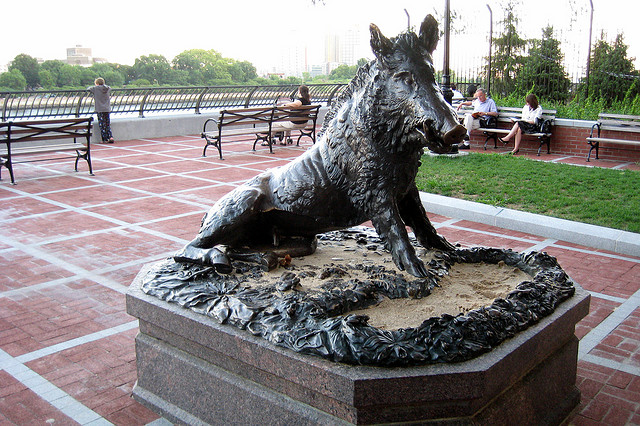 SUTTON PLACE PARK AT 57TH STREET: Okay, we're cheating a little here. Sutton Place Park's technically too big to count in this list, but it turns out that strip of waterfront made famous in Manhattan is actually comprised of five separate vest-pocket parks, so for the sake of this list, we'll focus on the East 57th Street portion. That adorable little spot's got a spectacular view of the Queensboro Bridge, which should be enough draw for some quiet riverside contemplation. But as an added perk, the park harbors a secret wild boar statue modeled after a famed bronze fountain by Renaissance sculptor Pietro Tacca. That fountain, "Il Porcellino," lives at the Palazzo Mozzi in Florence, though you can rub the snout of another replica in the city's Mercato Nuovo. 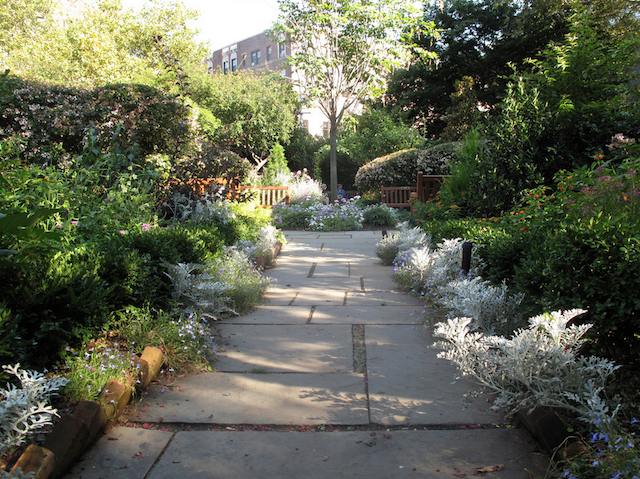 GARDENS AT ST. LUKE IN THE FIELDS: The charming gardens located behind the Church of St. Luke In The Fields got a mention in our secret gardens roundup earlier this year, but the spot is worth revisiting. The church's gardens are technically private, but the Barrow Street and North gardens are open to daily from 8 a.m. until dusk, and the Rectory garden is open Monday through Thursday from 10 a.m. to 5 p.m. During those hours, the tree-starved are free to take in the 2/3 acre worth of breathtaking flora and fauna, butterflies and birds; there are benches for quiet reflection, with Cloisters-esque architecture amplifying all that natural peace.

The Gardens at St. Luke in the Fields are located at 487 Hudson Street between Grove Street and Christopher Street in the West Village (212-924-0562).