The 8 Best Nights Out In NYC

There are lots of ways to wile away an evening in this city—you can spend all your money at a bar, for instance, or you can binge-watch Sex And The City for the millionth time, because Carrie Bradshaw's life lessons never get old. But one of New York's biggest assets is its wealth of unusual group activities that get you out of the house, with plenty of karaoke parties, trivia events and nostalgia nights on tap every night of the week. Here are our favorites; leave yours in the comments. 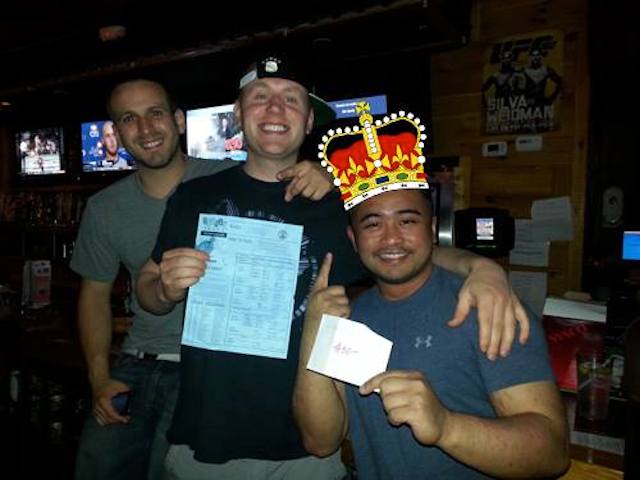 GEEKS WHO DRINK: First and foremost, there is nothing wrong with being a geek, or so says someone who can name at least eight planets in the Star Wars universe. And it's even better if you can pair your nerd knowledge with a cold brew or two, according to the trivia organizers behind Geeks Who Drink. The nationally-renowned trivia group puts on a slew of smart-people friendly themed pub quizzes at bars around town. And trivia here is tough—expect super-specific questions, and plenty of whiz-kids who know how to answer them. Geeks can both drink and win cool prizes, and they'll probably beat you at this game.

Geeks Who Drink put on events all over the city. Check their Facebook page for details. 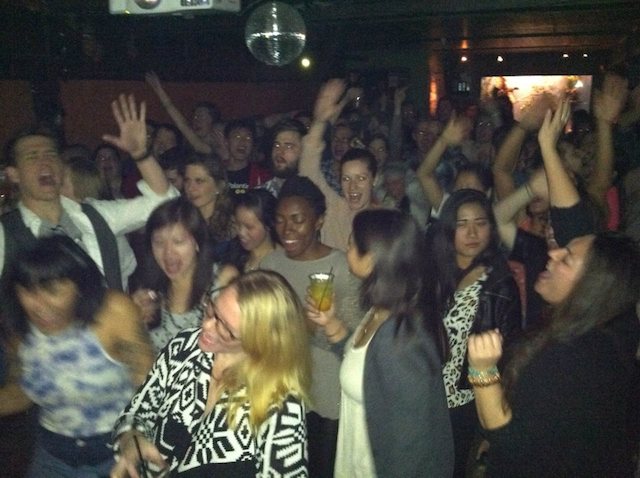 SECRETFORMULA SING-ALONGS: It's all well and good to belt out Chumbawumba's one-and-only hit every time you knock your deodorant stick off the dresser. But at SecretFormula's monthly sing-alongs, you get to scream one hit wonders, '90s tunes, boy band anthems, and Michael Jackson hits. Hosts create themed playlists (complete with the original videos) dotted with song lyrics, so you and a few hundred fellow singing enthusiasts can croon in chorus. Bonus points if you dress in theme (frosted tips for Boy Bands encouraged.)

SecretFormula's Sing-Alongs go down at Union Hall (702 Union Street between 4th and 5th Avenues in Park Slope, Brooklyn) and other venues around town. Check the group's Facebook page for details. 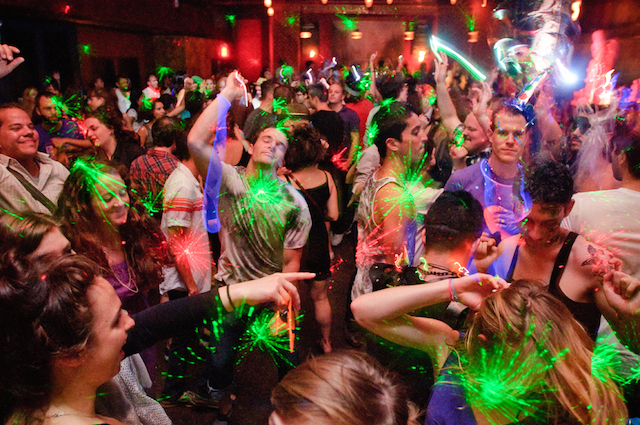 CHERYL: CHERYL-enthusiast Lauren Evans informs me that this monthly event, put on by an artist collective of the same name, is a "dance party...[where] organizers dress up as blood-stained cats." If that's not enough to entice you, Wikipedia describes CHERYL as "an artist collective that explores the themes of mortality, mania, the feline-human connection, the limits of shoulders, the flammability of dollar-store hair extensions, and the staining power of fake blood." Wear something that can handle getting drenched in dyed red corn syrup and prepare to dance long and hard.

CHERYL happens once a month at various venues around town; visit the collective's website for details.

KINGS OF KARAOKE: Sick of there never being any Swans on Sing Sing's karaoke menu? The Kings of Karaoke, the rowdy rock n'roll sing-a-long that's been roving the backwaters of divey Brooklyn for over a decade, has got you covered, with a songbook skews toward all iterations of rock and metal—from oi to industrial and everything else in between. Karaoke parties take place at venues all over the city, with popular spots including The Way Station in Prospect Heights and Cobra Club in Bushwick. Loosen up with a few $3 PBRs and pray you don't start a pit. (Sandra Song)

Kings of Karaoke puts on events all over town; check their website for details. 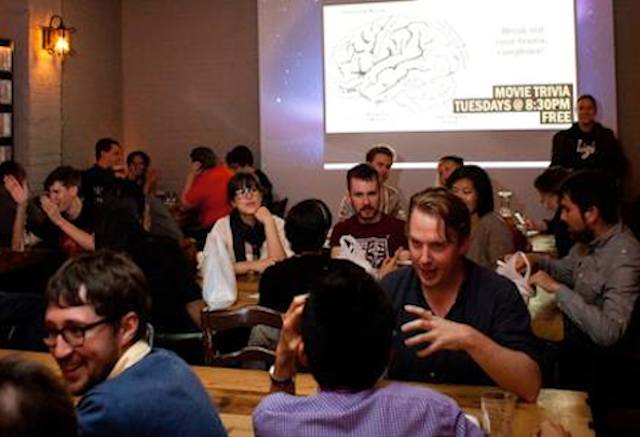 VIDEOLOGY: Whether you identify more with Gillian Anderson or Rory Gilmore, Videology has a nostalgia night for you, boasting a constantly rotating calendar of 80s and 90s-themed events. Hosting everything from Freaks & Geeks bingo and Wes Anderson bingo to X-Files trivia nights to Ghostbusters marshmallow roasts, you can pick the memory trip of your choice, buy a few drinks, and cozy up in the back room with some fellow pop culture-obsessives. Popcorn optional. (Sandra Song)

Videology is located at 308 Bedford Avenue at South 1st Street in Williamsburg, Brooklyn (718-782-3468, videology.info). See calendar for events and prices. 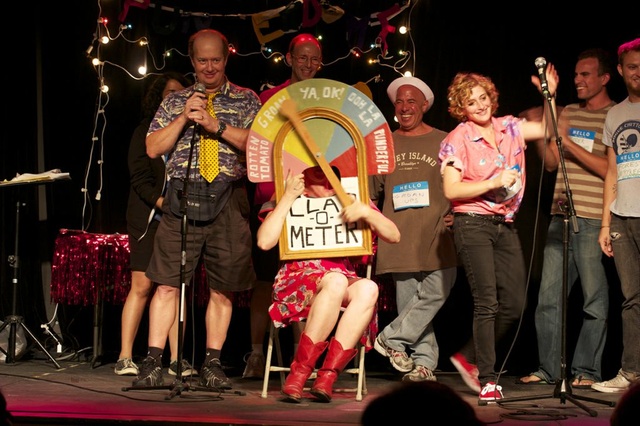 PUNDERDOME 3000: I'm only just now starting to warm up to puns, thanks in part to the insistence of my co-workers. But for those who have less trouble stomaching wordplay, this monthly pun competition is punishingly fun [DISCLAIMER: I did not come up with or approve this pun.]. Hosted by celebrated Brooklyn comic Jo Firestone and her father, "self-proclaimed Rodney Dangerfield impersonator" Fred Firestone, contestants out-pun one another in their quest to be crowned "Pun-master" and win prizes like...a bear suit. Or a pogo stick. Or a kitchen appliance. Audience members get to vote for their favorite contestants via "clap-o-meter," so even if you don't want to spin words, you have a literal hand in making some young punster's dreams come true.

Punderdome 3000 is held on the first Tuesday of every month at Littlefield, 622 Degraw Street between 3rd and 4th Avenue in Gowanus, Brooklyn. Visit the event's website for details. 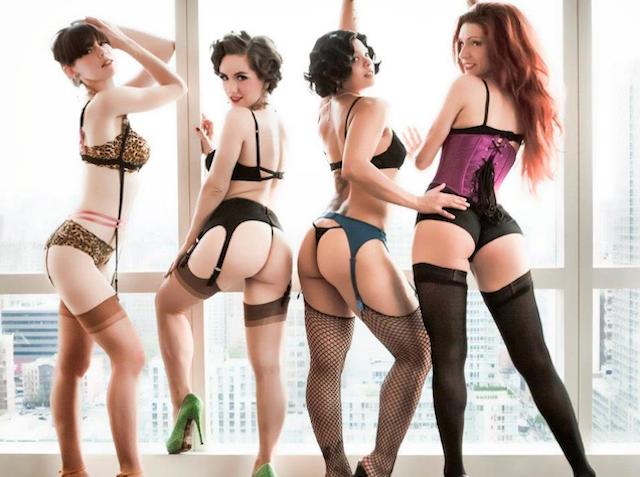 BURLESQUE AT BATHTUB GIN: Sexy spectacles abound at one of New York's premiere speakeasies with Wasabassco's biweekly burlesque performances (one of Travel Channel's Top 10 in the World) at Bathtub Gin in Chelsea. Every Sunday and Tuesday, you can watch top-notch performers do their strut, all while getting sloshed on premium drinks—shaken, stirred or straight-up. Just make sure you reserve a seat in advance. (Sandra Song)

You can catch Wasabassco on Sundays and Tuesdays at 9 p.m. at Bathtub Gin is located at 132 9th Avenue between 18th and 19th Streets in Chelsea (wasabassco.com). They've also got intermittent shows at venues all over the city. 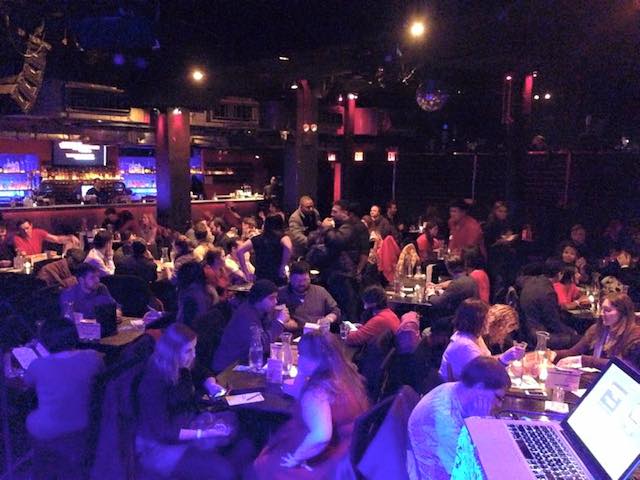 THE BIG QUIZ THING: For fans of live trivia and spectacles alike, the Big Quiz Thing puts on quite a [game] show, complete with multiple rounds, a zany quizmaster (creator and trivia-runner extraordinaire Noah Tarnow), videos, prizes, and lots of drinking. LOTS of drinking. Events are themed, with topics ranging from The Muppets to music trivia to an upcoming Star Wars-themed event at Subculture on May the Fourth (Be With You). BYO-Jawa beer.

The Big Quiz Thing holds various events all over town. Visit their website for details.

#best of gothamist
#cheryl
#geeks who drink
#kings of karaoke
#punderdome
#secret formula
#videology
#wasabassco
#original
Do you know the scoop? Comment below or Send us a Tip