The 8 Best Bowling Alleys In NYC

The bowling alley still lodged in your childhood memories has probably changed a bit over the years, if it even exists at all. Though bowling is still one of America's favorite non-sport sports, alleys have gotten swankier over the years, doubling as lounges and nightclubs for partiers who prefer to pair their fancy drinking with some sort of athletic activity. Unfortunately, some classic lanes have also been forced to close—longstanding alley Bowlmor Lanes abandoned its University Place spot in July, for instance, and Brooklyn favorite Maple Lanes closed last year. Luckily, there are still a few great alleys left, including old school offerings and newer, shinier installations. Here are our favorites; we know you'll leave yours in the comments. 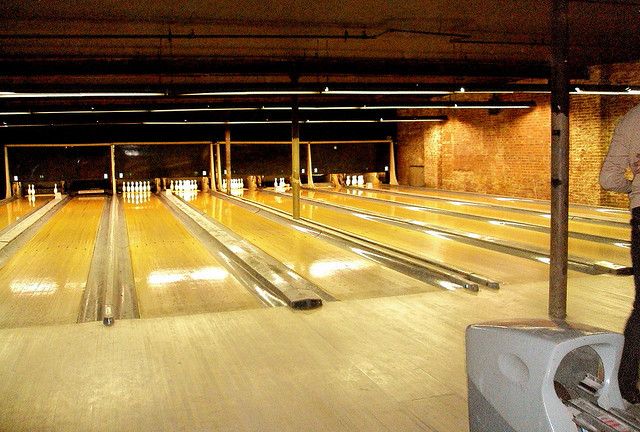 THE GUTTER: The Gutter gets overshadowed by its shinier, slightly more musical Williamsburg counterpart (see below on this list), but don't let the lack of Blue Ribbon chicken turn you off. The Gutter opened up back in 2007, boasting elegant, old school lanes, a classic bar and vintage decor. Those vintage wooden lanes are a little more scuffed seven years later, but that's a sign of love—they've still got the booze, decent, if slightly expensive prices ($7 per game, $40 per hour weekdays, $45 per hour on weekends) and NO CHILDREN ALLOWED, which is a bonus for those who are merely pairing their drinking with a couple tosses of a bowling ball.

As a bonus, you can bring your own food here, and no evil animated bowling pin will dance across an LCD screen every time your ball makes a sad beeline for the gutter.

The Gutter is located at 200 North 14th Street between Berry Street and Wythe Avenue in Williamsburg, Brooklyn (718-387-3585, thegutterbrooklyn.com). 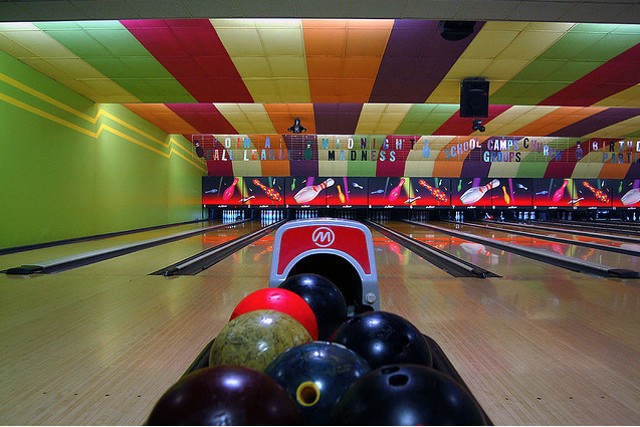 MELODY LANES: Unlike The Gutter, this Sunset Park bowling alley isn't a recreation of an old school spot—it is an old school spot right out of the post-disco era. Lanes are dotted with gaudy strobe lights, the ceilings and floor tiles are brightly-colored and clientele ranges from senior bowling leagues to young local folk to hipsters aching to reenact some of The Dude's greatest scenes. There's also a bar, of course, and a little arcade area in the back if you get tired of all the heavy lifting. Do note that a night out here will cost you: Melody Lanes runs $7 to $9 per person, $45 for one hour of a lane, and $65 to $75 for two hours. 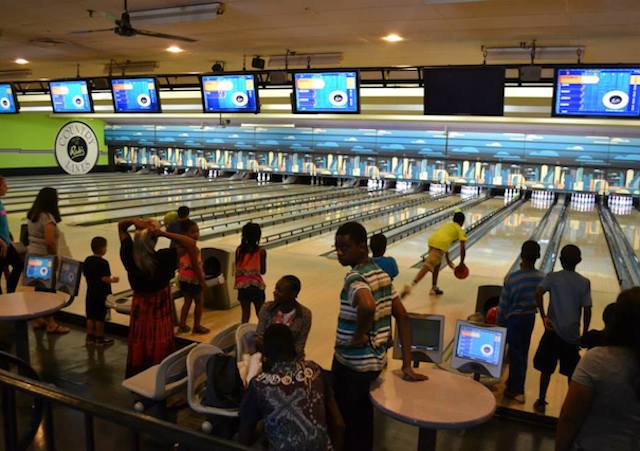 RAB'S COUNTRY LANES: This is another classic alley, located way out in Staten Island's wild blue yonder (just kidding, love you SI!). There's nothing flashy or pretentious about this place—you rent your lanes and shoes, have a beer and a slice of Gennaro's pizza and do your thing, just the way you used to at those 4th grade birthday parties (presumably minus the beer, but who's judging!). This place is overrun with children, which can be frustrating if those tiny high-pitched voices are prone to screwing up your strikes. But the prices are better here than in the subway-accessible boroughs: per game, prices run $6 on weekends and $7 on weekdays, and it's $20-$29 per hour for a lane. They've also got a stellar "Cosmic Bowling" deal if you're coming with a group— if you can cull at least three people, an hour of bowling nets you a free shoe rental, pizza and beer for $15, with your lane time getting amped up an extra fifteen minutes per person. 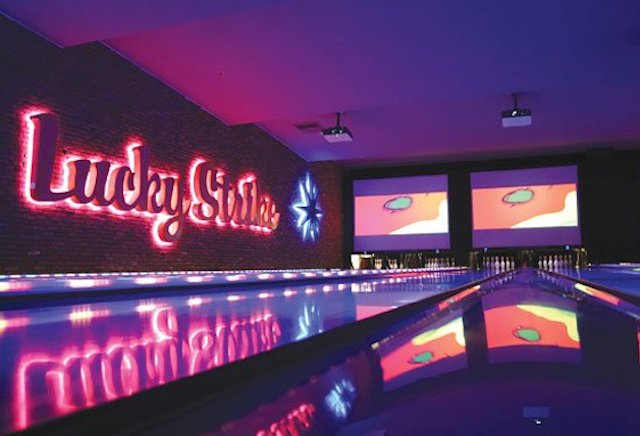 LUCKY STRIKE: Lucky Strike is the first of those massive, ritzy Manhattan alleys to make this list, boasting state-of-the-art lanes, classy "lounge" sofas, a dress code (see here) and bottle service, if you so desire. This is certainly not the HoeBowl of your youth, but if you've got the dough and feel like throwing a bougie bowling party, this is the place in Manhattan to do it. Regular per game per person prices run $8.95 to $11.50, and it's $55 to $75 per hour for a lane, with a limit of 10 people. But if you're looking for a deal, Lucky Strike runs a "Bottomless Bowl" special: On Mondays, Tuesdays and Wednesdays, you can score unlimited bowling, billiards and ping pong from 8 p.m. to close. That deal runs $22 per person, but note there's a minimum food and beverage spend. 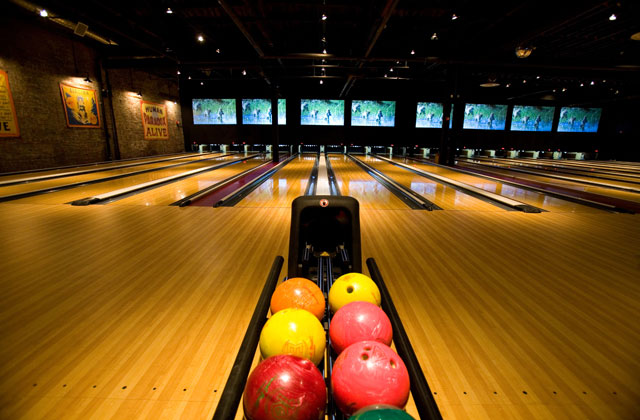 BROOKLYN BOWL: Brooklyn Bowl earned accolades from us when we rounded up the best music venues in the city, and we're circling back around to bless them with a title for their bowling. Like Lucky Strike, Brooklyn Bowl's a high-end kind of place, boasting over a dozen lanes, the aforementioned Blue Ribbon outpost and the occasional (read: very frequent) concert—on unbooked evenings, you can usually catch a fun music video and the occasional free bowling special. Otherwise, lanes run $20 per lane per half hour (BOWL FAST) Monday through Wednesday and $25 per lane Thursday through Sunday, though you can score 50 percent off on Sundays if you mention the "Sunday Special" at the door. 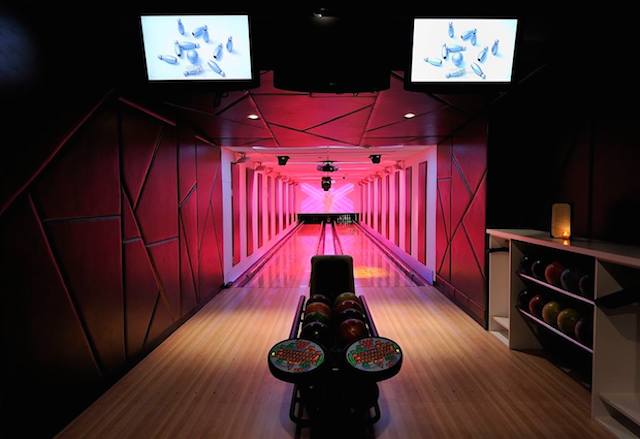 FRAMES: Frames is another upscale alley, hidden somewhere in Port Authority's terrifying bowels. Frames's "bowling lounge" comes with all the fixings—glowing lights, a chic bar, and leather couches to sprawl out on while sipping pricey mixed drinks and watching your friends bowl. Just like Lucky Strike, you'll have to adhere to a dress code here, and bowling runs $60-$75 per hour per lane, although as many as 7 bowlers can chip in at once. Once you fork over the cash, though, you can bask in the gentle glow of Frames' soft neon lights while your friends bowl a gentleman's 40. 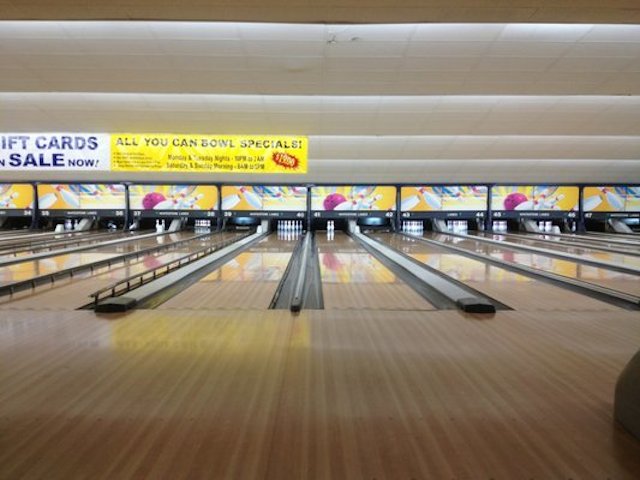 WHITESTONE LANES: Whitestone Lanes is open 24/7. As in, all the time. If you have a hankering to bowl at 3 a.m., Whitestone Lanes will accommodate you. You could literally live in Whitestone Lanes. Round-the-clock bowling availability aside, a day/night/midmorning at Whitestone will get you a no-frills good time, rife with cheap alley snacks and mixed drinks, a jukebox, and some reasonably-priced lane time. Lanes run $4.50 to $7.50 per person per hour. 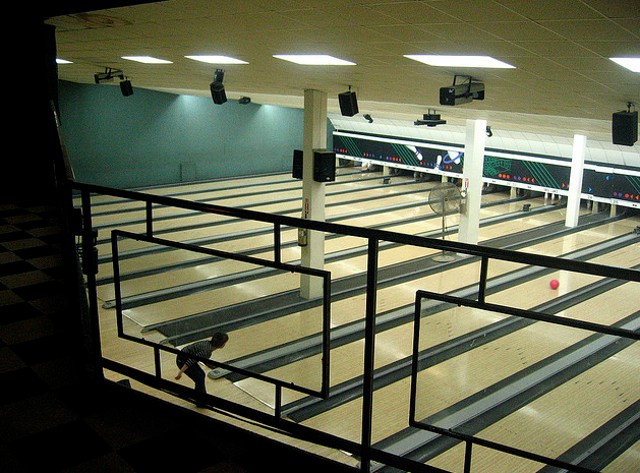 SHELL LANES: Circling back to the old school lanes, this Gravesend spot is one of the cheapest in the city for some low-key bowling. The alley boasts 32 lanes and offers open bowling at $3.75 to $6 per game, plus they've got a whole slew of leagues on tap if you plan on making things a bit more competitive, not to mention sporadic weekday and weekend specials. There's nothing glittery or fancy here, it's just a cheap spot to bowl—a dwindling commodity in the city, especially now that beloved Bensonhurst alley Maple Lanes has closed. Expect to meet a few characters here, and remember that this isn't 'Nam, this is bowling. There are rules.

BONUS: HUDSON LANES: Hudson Lanes doesn't get the full "Best Of" treatment, since Jersey City's still not a part of NYC, no matter how many Barcades they open. But this bowling alley's so good, it would be irresponsible of us not to recommend you take the PATH out there just to experience it. There's nothing fancy here, just a few classic lanes and the eclectic bowling clientele that goes with them, but for real bowlers, that's all you need. Rates vary.