The 8 Best Arcades In NYC

New York City's video game arcade scene is hanging on—barely. The rise of online gaming, be it through apps, consoles, or computers, has eaten away at their old monopoly on communal gaming (why schlep across town with a sock full of quarters when you can host a global Street Fighter tournament without ever leaving the couch?). Luckily, a handful of great arcades are hanging in there, offering us the chance to try out brand new machines and button-mash along to old faves. Here are our favorite arcades in New York; leave your personal recs and high scores in the comments. 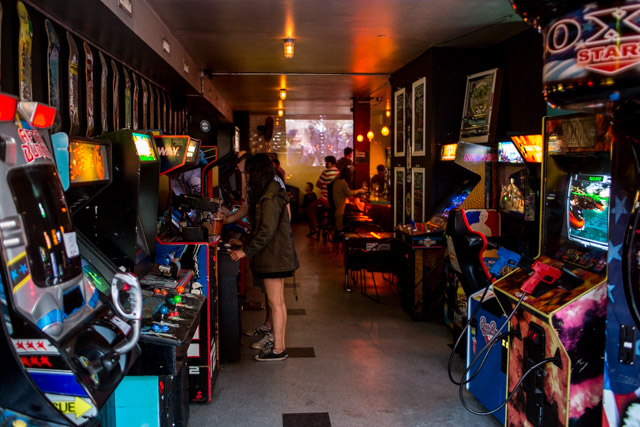 TWO-BIT'S RETRO ARCADE: Wash down your flawless victories with cheap cans of PBR at this Lower East Side spot, where inebriated play is strongly encouraged. Two-Bit's features a beautiful variety of mostly-classic games, from the excellent shooter Maximum Force to Marvel vs. Capcom, Street Fighter II, and the modern masterpiece known as Big Buck Hunter. Pinball lovers will love the three machines near the front window and really love the six more near the back (stop in on a weeknight and you'll find a happy hour crew of silverball nuts lighting up the bumpers). On weekends the arcade can get crowded, but fear not: every machine is worth playing and credits only range from 25 cents to a dollar. Behind the bar you'll find liquor, eight beers on tap, and cans starting at $4.25 each. 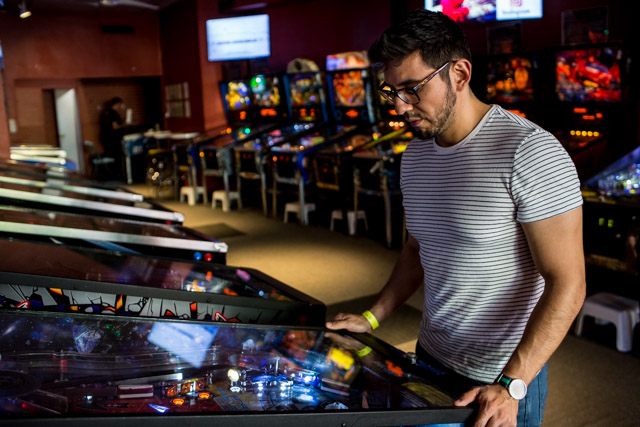 MODERN PINBALL: This Kips Bay shop functions as a showroom, museum, and arcade devoted to pinball and pinball only. Over two dozen machines line the walls—each one has been carefully chosen by owner Steve Zahler for either being notable within the long history of pinball or just flat-out fun as hell. Some machines date back to the mid-70s, including a Skylab machine that's been deconstructed to reveal the dizzying engineering work behind all those flippers, bumpers, and flashing lights. Zahler has placed placards atop most of the machines, explaining their importance and specific appeal. One machine might feature the first-ever human voice sounds in pinball, while another packs an ultra-rare back moving back panel. There's just so much to appreciate here, and the shop has rightfully been designated a museum by the city. During the day, local elementary classes pay visits to Modern Pinball to learn about engineering, and at night visitors can play all they want for a flat hourly rate of $15. "The artwork, technology, and game play—these machines are time capsules," Zahler said. 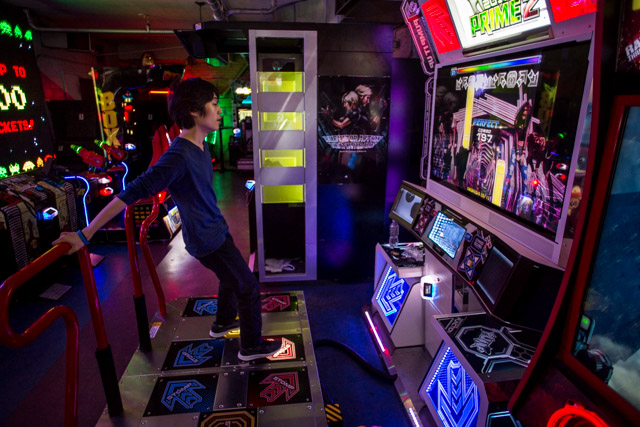 CHINATOWN FAIR: If the arcade scene from Lost in Translation makes you swoon, then get a little taste of Tokyo at Chinatown Fair. The place's cramped assortment of fantastic games are so loud and noisy you might just forget where, or even who, you are. Guitar Hero, Street Fighter, Tekken, a wide array of shooters, basketball, driving games, and a new Space Invaders game with an impossibly large screen all inhabit the small space, but the star attractions here are Dance Dance Revolution and its Korean counterpart, Pump it Up. On any given trip you'll be able to marvel at players who know the dance games' songs and steps by heart and are able to pound out blistering patterns, racking up near-perfect scores to dizzying K-Pop. There's just one catch: all this fun ain't cheap. Expect to pay up to $1.75 per person per game on many of these dreamy machines.

Chinatown Fair is located at 8 Mott Street, between Pell Street and Bowery in Chinatown. (212-964-1001, chinatownfair.biz 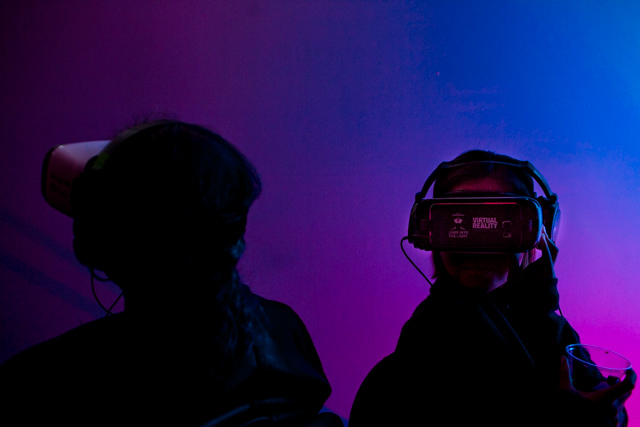 Jump Into The Light (Scott Heins/Gothamist)

JUMP INTO THE LIGHT: The future of gaming and maybe even all human life itself is virtual reality, and Jump Into The Light does it better than anyone in town. The arcade/art gallery/party space features multiple different models of headsets and supported games, ranging from beautiful art simulators to pulse-raising shooters to Orion, a game that allows you to use your bare hands to build and toss 3-D shapes in a virtual environment. It's both simple and freaky as hell. Visiting Jump Into The Light requires a reservation, and the clientele skews toward semi-obsessive early adopters. During my last visit, a man who asked to be identified as User X told me "If we're ruining this reality, I might as well play in a virtual one. VR is my escape from Trump's America."

Jump Into The Light is located at 180 Orchard Street between Stanton and Houston Streets on the Lower East Side. (jumpintothelight.com) 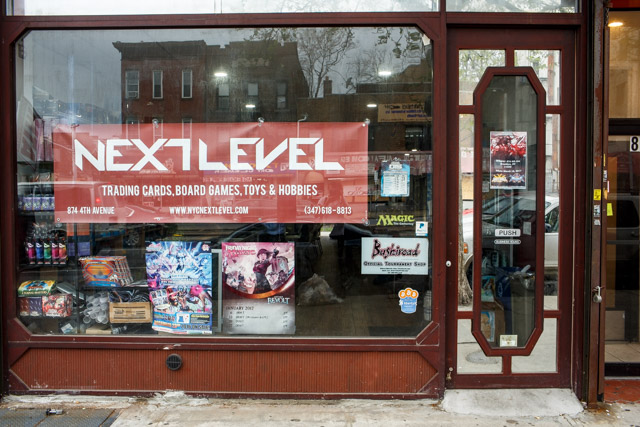 NEXT LEVEL: Calling this trading card and collectible shop an arcade is a stretch, but on tournament nights there's no fiercer gaming scene in the city. Next Level boasts seven big screen TVs housed in faux-arcade shells that serve as ground zero for Street Fighter tournaments that draw competitors from all over the world. Some tourneys pay out hundreds of dollars, and the biggest matches are streamed online for the enjoyment of e-sports fans all around the globe. If you're not an elite gamer, don't worry! Anyone can pay a small fee to play on the screens and game consoles and the other customers playing Magic: The Gathering are (mostly) harmless. 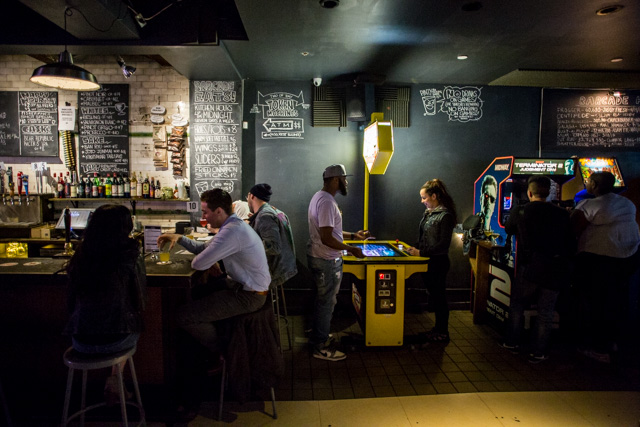 BARCADE: Co-owner Paul Kermizian may not have known it when he opened the first Barcade in Williamsburg in 2004, but he started a trend in bar gaming that would spawn multiple Barcade offshoots and many an imitator. Games vary location-to-location, but look for classics (Ms. Pac-Man, Mortal Kombat, Ninja Turtles) and some off-beat selections including Michael Jackson's Moonwalker and the maddeningly difficult and addictive beer game Tapper. As much arcade as it is bar, expect a rotating list of interesting craft beers at each location that are as celebrated as the high scores listed for every game. (Nell Casey)

Barcade has multiple locations, including the Williamsburg original at 388 Union Avenue, an East Village offshoot at 6 St. Marks Place, and a third NYC outpost at 148 West 24th Street; barcade.com 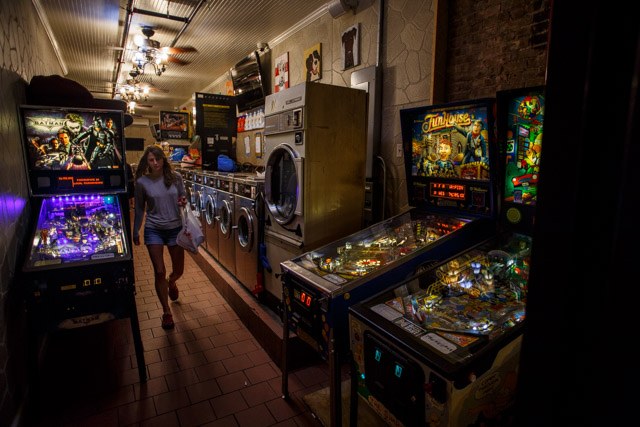 SUNSHINE LAUNDROMAT: Clothes tumble dry and pinball machines ring like bells in this microeconomy run entirely on quarters. Sunshine Laundromat is a pinball den tucked inside a cramped Greenpoint wash-n-dry that features over 20 machines, a bar serving craft beer, and a coin-operated fortune telling monkey. The place was never really meant to be an arcade, but over the last six years owner Peter Rose has found ways to fit more and more video game machines into the laundromat. Eventually Sunshine began removing washers and dryers in order to make room for the games and now, well, here we are. A wash will cost you $2.75 for a double load, and the dryers are 5 minutes per quarter. The games are all 75 cents per play, while beers run $5-7.

Sunshine Laundromat is located at 860 Manhattan Avenue, between Calyer Street and Greenpoint Avenue in Greenpoint. (718-475-2055, sunshinelaundromat.com) 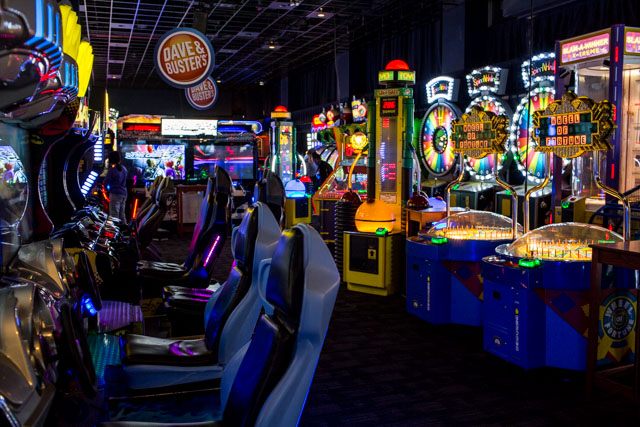 DAVE & BUSTER'S: This is madness. Times Square, arcade gaming, and alcohol are all shot through a supercollider of corporate funding at this place, where you'll be both overjoyed and genuinely terrified by the variety of high-caliber games. There's skeeball, air hockey, DDR, Down the Clown, Guitar Hero, so many racing games, a football exercise drill simulator (why??), a weird six-foot tall Rock 'Em Sock 'Em Robots game, a space flight you can't even control (you just sit in it), and a Kung-Fu Panda-branded dumpling eating simulator. Winning games earn you tickets that can buy toys, stuffed emoji pillows, drones, and an electric guitar painted with the Dave & Buster's logo. The games are expensive, but the bar serves strawberry watermelon margaritas with green salt on the rim! When all the other arcades on this list are closed, Dave & Buster's will probably still be standing, so don't even try and fight it. Death is certain, so let's all drink and game in the crossroads of America!