The 7 Best Strip Clubs In NYC

Sure, any day of the week you can brave Times Square to get an eyeful, but NYC also offers more festive ways to appreciate the human form in its unclothed glory. Our strip clubs may not be as flashy (or famous) as their counterparts in Vegas, but the people of this city are just as sexy and talented as anywhere else in the world (more so, even) and everybody can enjoy a comely boob or butt in their proximity.

While there are tons of incredible burlesque, performance parties and other wonderful shows that skew in the strip direction, we limited this list to those that fit True Strip Club Criteria: naked nipples and lap dances. Below, our favorite spots to get rubbed on by beautiful bodies; as always, leave yours in the comments. 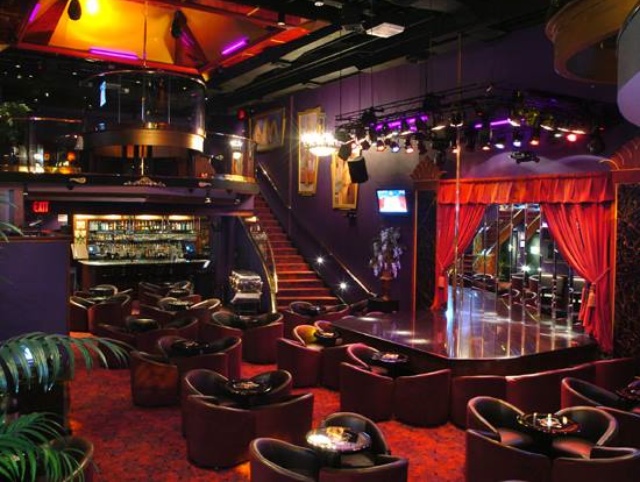 HUSTLER CLUB The pole work at this club is second to none in New York City, even though the pole itself isn't the largest in town. Nevertheless, the women who work it are incredibly talented—and strong—performing feats high above the stage as they contort their bodies into beautiful poses for the crowd below. They're equally talented on the ground, performing on one of the smaller stages or giving a patron a lap dance ($20) in a one-on-one environment.

Crowds here are diverse, from the standard bachelor party to after work suits to couples to women and all genders who appreciate the female form. Despite its size, the club still manages to feel intimate, with some darkened corners available for more private encounters plus a large section with tables and chairs right in the open.

Happy Hour 'til 9 p.m. means half off everything, including both alcohol and private rooms, and a bottle of Bud Light will run you $10 other times of the day. They charge a $20 admission ($25 on Saturdays) after 9 p.m. but free club passes are readily available on their website. 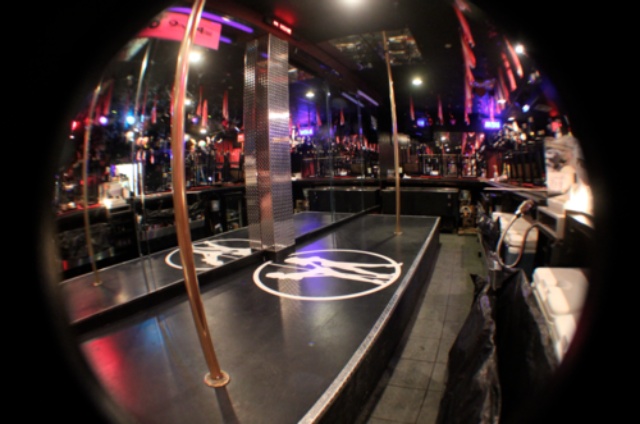 PUMPS: This East Williamsburg joint, which has been around since 1997, is an "an old school titty bar," as described by its owner, who told us, "We're not trying to be and don't want to be a gentleman's club." For people who are turned off by the pretension and prices of bigger clubs, this is most definitely your spot. Seats at the bar face a long, narrow stage on which ladies pose and twirl around. The setup can be somewhat awkward—bartenders must often navigate around performers interacting with customers over the bar—but it makes for a more casual experience that's conducive to hanging out as much as it is interacting with the diverse and dynamic performers.

In the vein of chilling, all the beers are $7 except during happy hour, when both beers and well liquor are just $4 from 3 p.m. to 6 p.m. everyday including Saturday (the bar is closed on Sundays). Lap dances are an industry standard $20 and the bar hosts regular variety shows with fire breathing and the like for a different kind of performance. As the owner says, "All we want is people to come in buy some drinks tip some girls have a good time and at the end of the night go home."

GALLAGHER'S 2000: Even if you've never been to this LIC club, you've definitely seen their kooky alien commercials that air late night on NYC channels. No guarantees of otherworldly experiences, but this Queens club is the best of the borough, boasting cheaper prices than its Manhattan counterparts on everything from drinks to private rooms. A version of Gallagher's has also been operating in the neighborhood since 1977, making it the oldest cabaret club in Queens if not in all of New York City.

As with many of the city's clubs, they also offer a full food menu to consider if you're making an evening of it. In fact, their food program is one of the most comprehensive around, consisting of a big Friday afternoon buffet until 7:30 p.m.; a lunch special with $4 beers that includes a free sandwich; and also free hot dogs all day on Sundays. But you're here for the view, you say? Count on between 20 and 45 dancers each evening performing on the central stage, $20 lap dances plus a special Champagne Room with private dances for $180 for a half hour. 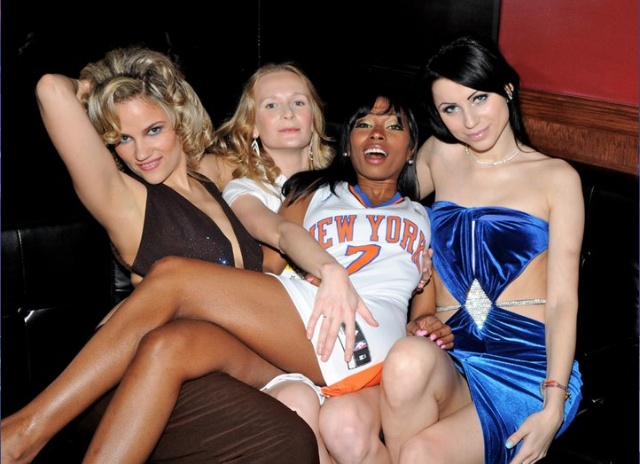 RICK'S CABARET: Rick's has just about everything one could want in an evening: a steakhouse-style menu and a second floor dining room in which to enjoy it, a roof deck and multiple floors, stages and areas for enjoying the company of gown-clad ladies. The club, which celebrates the 10th anniversary of its NYC flagship in October, doesn't have the most athletic pole dancing but we love it mainly for its relaxed environment and diverse staff (cheers to Rick's for employing not just rail-thin 21-year-olds).

On many nights, the space is teeming with around 100 dancers, some of whom can be found on one of the club's four stages or entertaining in a private VIP Suite. In milder temperatures, grab a drink ($8 drinks nightly til 8 p.m., $10-$12 for beers after that) and head to the roof deck, which boasts dizzying views up at the nearby Empire State Building. The club also offers lots of parties and specials, including their upcoming anniversary celebrations plus prix fixe $15 brunches on the weekends and a Wednesday Steak and Lobster deal for $49. 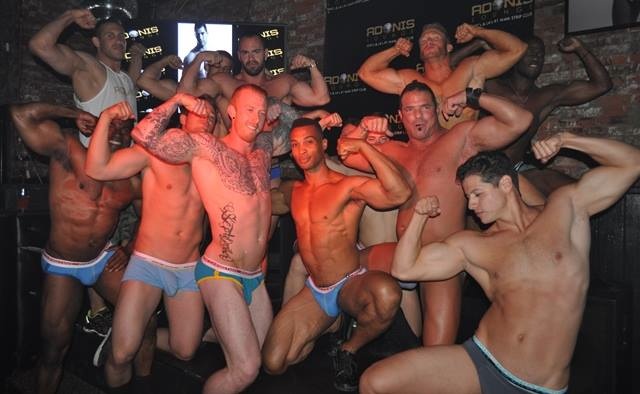 The M4M show features over 30 dancers who serve as eye candy in the go-go arena and also offer one-on-one lap dances to paying clientele. Dudes with extra scratch can also opt for a more private experience in one of the club's Champagne Rooms. Cover is just $10 but drinks can be on the pricier side, so beware a big tab. 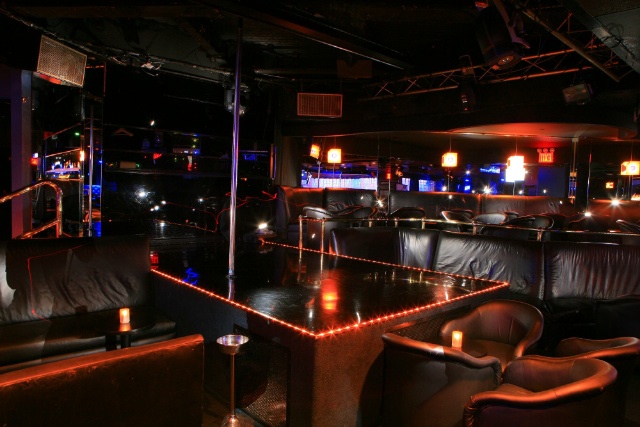 SAPPHIRE: Most of the city's Manhattan clubs are either clinging to the West Side Highway or plopped down in big tourist spots like Times Square, but this classy club and adjoining steakhouse are rare birds on the Upper East Side. The space is beautiful, rivaling any of the big names clubs out in Las Vegas, with comfortable leather seats and couches, a large bar area and private rooms tastefully curtained off with tasseled rope. To match the decor, exceptionally beautiful dancers of all varieties plus a charming and equally beautiful staff of waitresses and bartenders to boot.

Friday and Saturday nights are popular for obvious reasons, but it's the club's legendary Sunday night industry fetes that are a sight to behold. Strippers bearing flaming bottles of champagne, celebrity DJ appearances and an energetic, club-like vibe make it a go-to for anyone who doesn't have to be up early on Monday morning (or can survive the hangover). They offer free limo service to the club from destinations in Manhattan, a weekday happy hour with no cover and $5 wells and regular appearances by adult performers. 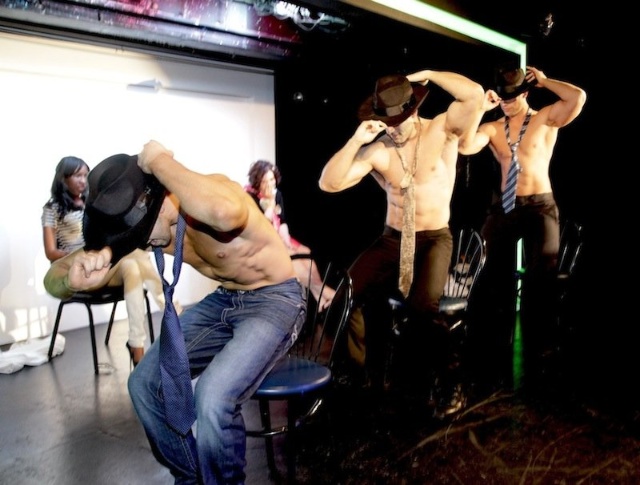 HUNK-O-MANIA: Though there are plenty of strip clubs to watch ladies get nekkid, Midtown's Hunk-O-Mania is the only strip club/revue geared towards bachelorettes. And what a...show...it is—$35 gets you in to watch a bunch of shirtless, ripped males cavort onstage in tear-away pants and a series of barely-there g-strings, dancing, thrusting, Magic-Mike-ing (the cowboy hat-clad emcee told us the club's actually the inspiration for Magic Mike) and performing faux sex acts on the hapless penis tiara-wearing gals in the crowd. Though the very hunky, very muscular men at Hunk-O-Mania feel weirdly predatory when you're not in a big group, this place is perfect for women who want to get a few inebriated laughs at the expense of a future bride or birthday girl.

The club is open Thursday through Sunday nights, with doors open at 7:30 p.m.—there's a two-drink minimum, and lapdances run $20 through $30. If you're lucky, though, door guy Dino'll give you a ride to the afterparty at Club La Souk, where you get free entry, a bottle of vodka, and maybe even a visit from some strippers post-show. (Rebecca Fishbein)