It is an indisputable fact that all shows should be exactly like Broad City, where creators Abbi Jacobson and Ilana Glazer spend each 22-ish minutes celebrating joy, friendship and weed with perfect comedic aplomb.

Though Abbi and Ilana are the human stars, New York City's something of its own character, a wild jungle filled with free air conditioners, vegan sandwich shops-slash-art galleries, snooty buy-and-sell clothing stores, frozen yogurt, and dogs that look like Judith Light. Broad City's NYC is satirical, of course, but the show's jokes are beautifully rooted in recognizable truth, which makes for the best comedy.

Here are our favorite NYC moments on the show...

My roommate once missed a FedEx delivery and had to retrieve it in Maspeth, Queens, at a shipping facility that was as bizarre and hard-to-reach as the fictional North Brother Island warehouse holding Abbi's hot neighbor's package hostage. Sadly, the person behind the counter who helped her was not half as spectacular as Garol, but her supervisor was probably watching, too. North Brother Island, by the way, is quite real, but the Costco and shipping facility are not.

Sure, Abbi's drugged out on firecracker smoothies and pain pills, but who hasn't stumbled into Whole Foods while under the influence and gotten jazzed over their extensive health food collection? Hearts of palm! Organic cereal! Women with yoga mats! Don't worry, you applied for a credit card for this exact purpose.

It's hard to pick just one scene from the second season finale, since St. Marks's beautifully repugnant nature is so well captured here. Everything from the BYOB sushi joints to the trust fund crust punks to the mysterious creepy tree man hits a night out there on the nail, though it's a bummer there were no piercing scenes and/or references to the dearly departed automat. But at least Abbi and Ilana know what's up when a creeper tells you to "smile."

Penn Station's more than just an eyesore—it's a windowless pit of sadness that's filled to the gills with fast-food joints, Long Islanders, and people who can afford trains Washington, D.C. It's not hard to see why it was a dealbreaker for Abbi's wedding date/boring bang-buddy. "Penn Station....I can't." We hear you, dude.

Abbi and Ilana's subway ride from hell seems nearly ripped from our etiquette posts. The are the backpacks, the nail clippers, the diners, the standing pregnant women, the pole abusers, the "Showtime!" dancers and that one (nearly) empty car YOU SHOULD NEVER GO INTO. Do note, though, that walking between subway cars is both illegal and a bad idea. 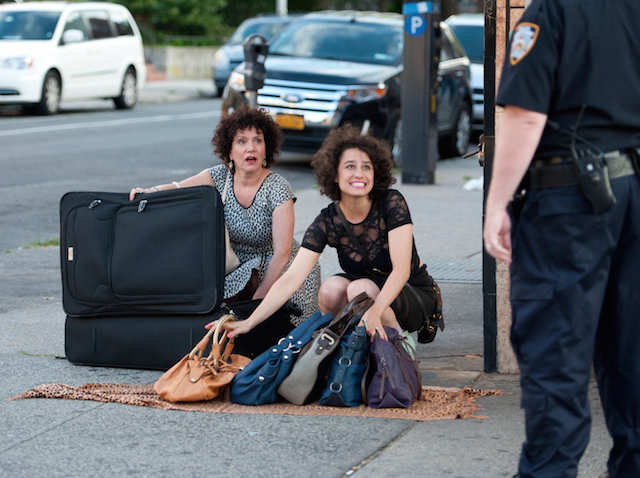 The best way to alleviate feelings of loss is by filling your life with knockoff designer bags, a lesson ably imparted by Ilana's mother, Bobbi (played by the inimitable Susie Essman), whose own mother has just died. Though some of us sidestep the counterfeit goods strewn all over Canal Street, Ilana and Bobbi are able to deftly navigate the salesmen, even making their way to a secret Canal Street bag den manhole hidden from view (be sure to bring your own blindfold, lest you contract pinkeye). Of course, knockoffs are still illegal, and the loss of such well-crafted fakery can sting almost as much as the loss of a human. "Mom, feel something!" "I'm feeling the inside of this bag!"

THE UPPER EAST SIDE

The Upper East Side might be the next Williamsburg one day, but for now, it's a "horrible, vapid wasteland" filled with snooty rich people who own horses and wear letter sweaters from Ivy League schools. Oh, and the city's best museums, beautiful buildings, Central Park, and sidewalks you can stroll down without getting hit in the face with a piece of garbage.

#best nyc moments
#broad city
#original
Do you know the scoop? Comment below or Send us a Tip