The 6 Best Skateparks In And Around NYC

Skateboarding at its purest tends to involve trespassing and pissing random people off, but we the people who skate are not all 13, or even 13 at heart, anymore. The working schlub lifestyles of many adult skaters no longer lend themselves to long nights dodging security guards in office building plazas, capped off with fast food and 24-ounce cans of syrupy "tea." For us, for the beginner skater, and for the skater too lazy to embark on a street mission, there are skateparks.

The shredding youth of New York City are spoiled for options. Not only do they have the endless playground of the five boroughs to explore—despite the Manhattan foot and car traffic, the grizzled pavement, and the theoretically tough winters, the city is a skater's wonderland—but over the last decade or so, skateparks have proliferated in each of the five boroughs. This is thanks in large part to the largesse of a Parks Department backed by the richest tax base in the country, combined with the advocacy of, among other people, 5Boro Skateboards owner Steve Rodriguez. Rodriguez has put himself forward as a sort of skateboarding ambassador to the city, and has consulted with the Parks Department on the design of numerous skateparks.

These parks have come to be the dominant form of skatepark in New York, and they seem to reflect Rodriguez's tastes as a street skater: low ramps, and lots of rails, banks, and ledges (Update May 6th: I asked the Parks Department if the three-feet-and-lower ramps of most recently built parks in the city reflected a design policy. A spokeswoman indicated that it didn't, but Rodriguez says there is such a policy, and if he had his way, the city would go bigger. Thanks for the clarification, Steve.). This won't mean anything to the non-skater, but in the world of shred-sledding, there has historically been a stark divide between the hair-raising stunts and technical ledge wizardry of street skaters and the surf-influenced carving, grinding, and airs of skaters who favor halfpipes, bowls, and empty swimming pools. The three-foot miniature bowls and embankments of many of New York's recently constructed parks are serviceable, and there's lots to like for any type of skater, but the cheetah-print-kneepad-wearing raw dog in search for concrete waves will find them disappointing.

For the sake of variety and ideological purity, I have included some imperfect and legally iffy spots in this rundown, but if you're seeking a purely decent, well-constructed, middle-of-the-road skate experience, trust that there is a wide selection of other new parks, and probably one somewhat near you. For a more comprehensive list of skateparks, see here. And if you are a newcomer to the city looking to find all the famous street spots, the inimitable NYC skate blog Quartersnacks has you covered.

All legal caveats apply, i.e. if you see a no trespassing or no skateboarding sign and decide to trespass or skate anyway, that's on you, bub. 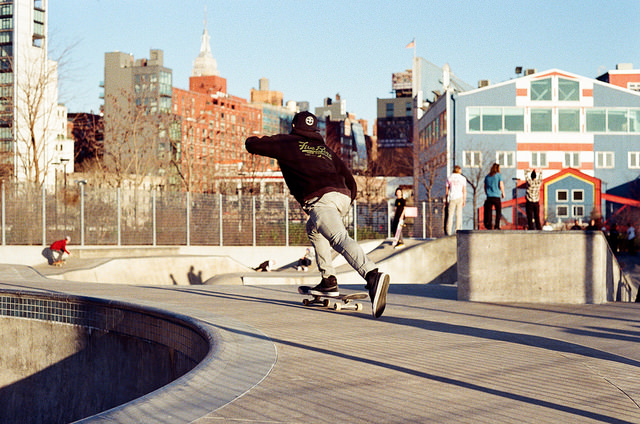 This transition-heavy park is the closest to the Dali-painting-like undulating wonderlands of the Pacific Northwest. Its inventive design is such that it accommodates all skill levels, and with the right amount of pumping, it's possible to circumnavigate the place without pushing more than once or twice. There is a rail and a ledge, but those seeking simulated street elements tend to go elsewhere, as this is the main ramp-oriented park in the city. The standalone bowl with pool coping and a 10-foot deep end is of particular interest to the connoisseur. If you want to avoid the crowds of super-skilled teens and 20-somethings zipping around, come on a Sunday morning. It'll just be you and a smattering of gray-haired dads padding up, teaching their kids to kickturn, and sipping iced coffee between mellow runs.

One of the main things getting in the way of a good time at New York's skateparks is other people—when the weather is nice, any place near a transit hub is gonna be packed, particularly in lower Manhattan and Williamsburg. If you have the time, or happen to live uptown, this park in Washington Heights is an escape from all that. Tucked in a wooded strip midway down the dramatic bluff overlooking the Harlem River, with the spaghetti of the Washington and Alexander Hamilton bridges looming overhead, the place feels like a secret. In another setting, the layout—three separate linear sections shooting you downhill into various banks, bumps, and ledges, would feel weird and fill up quickly. A brick mini-bowl section would seem especially like a waste of space in a more populated park. But as it is, the design stays interesting, and there is plenty of room to experiment without running into someone.

Also, the seclusion lends itself to graffiti practice and weed-smoking, making the place a kind of platonic ideal of what an outsider might imagine a skatepark in New York City to be like. 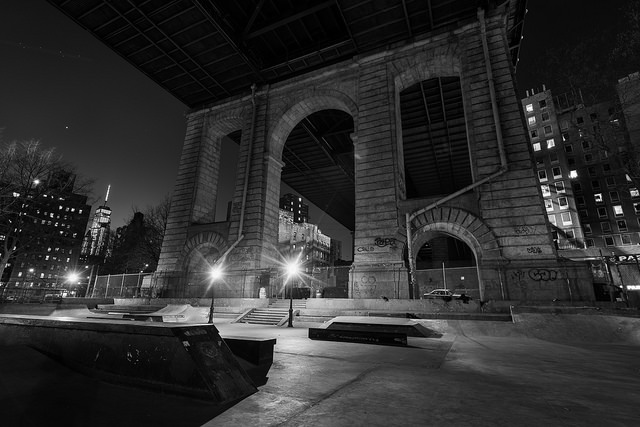 Consider this a stand-in for most of the rest of the low-to-the-ground street-plaza type parks around the city. This one is centrally located under the Manhattan Bridge, minutes from dollar dumplings and the Lower East Side bars favored by New York's skate elite. So your chances of seeing some pros casually bust out mind-blowing lines are substantially higher here. Also, even though the place is teeming with skaters on a given sunny weekend day, it's spacious enough that you can still squeeze some runs in.

Built for the 2010 Maloof Money Cup contest, this thing is a pure street plaza with nary a quarterpipe in sight. Okay, there's one little ramp section. I haven't been here because street plazas aren't really my thing, but those seeking hubbas, stairs, rails, euro gaps, and sweet pristine flatground will find it in spades here. A bonus: it's near the Unisphere, the fountain around which doubles as a famed ledge spot in the cold months when the water is off.

Building renegade skateparks in neglected corners of cities is a time-honored tradition in skateboarding. This volunteer-built skatepark in Newark's industrial Ironbound District is typical of the form: crusty and graffiti-covered, with ramps spilling out of a gutted abandoned warehouse. The concrete is chipping, the transitions are imperfect, and the future of the place is uncertain. It's everything that a professionally built skatepark is not, and that can be invigorating. It also tends to keep out annoying children on scooters.

Internet chatter has it that in March contractors partially destroyed the warehouse without permits before the city intervened, and though the skaters have the city's blessing to be there for the moment, the bulldozers could come soon.

I'm not going to include the address, but ask someone in the know.
DIY park honorable mention: The banks under the Brooklyn-Queens Expressway at Lorimer Street in Williamsburg. 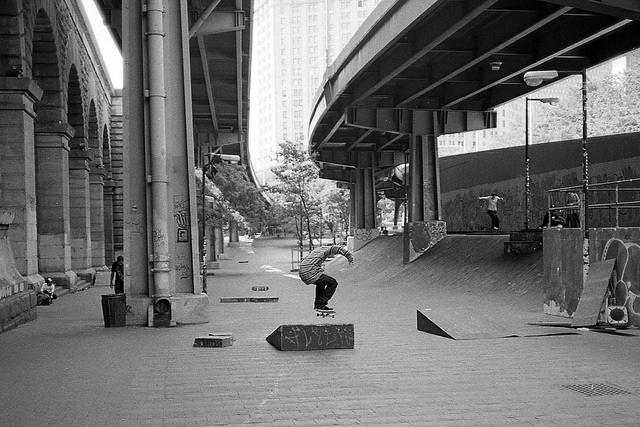 The Banks are not a skatepark in the traditional sense. Rather, brick embankments around the supports on the Manhattan side of the Brooklyn Bridge form dramatic waves that swell as you go downhill towards the East River, plus there are a handful of big stair sets. These features, combined with a surrounding park that insulates the place from the traffic and authority figures of the Financial District, have made the Banks a hub of New York City skateboarding for decades. In 2005, after a parking lot scheme effectively shut down the spot, Steve Rodriguez and other advocates convinced the city to make it a sanctioned skatepark, and in subsequent years, professionally made obstacles were brought in to augment the space.

In 2010, though, the entire park was closed to make way for parking as part of planned bridge repair work. That work was supposed to end in 2014, but that year came and went and there is still no end in sight. I reached out to the Department of Transportation about this and they would not even give me completion date. A spokeswoman wrote in an email, "A new contract for the restoration of granite and masonry facades is expected to begin in early 2018."

(For the benefit of my coworkers who give quizzical looks when I mention going skateboarding, here's the author as weekend warrior.)

Demand for the city to reopen the Banks is so strong that, when the DOT took down a section of fence around two weeks ago, skaters swarmed the place. Once word got online out that the space had "opened," skaters continued to flock to it after the section was replaced, jumping the fence or crawling through a hole. Apparently trespassing within direct sight of One Police Plaza is a bit easier when you do it with three dozen other people, because when I stopped by last weekend, the cop who kicked us out couldn't be bothered to get out of his car.

Speaking of strength in numbers, if you'd like to call for the city to reopen the Brooklyn Banks to skaters, try calling the following numbers and politely relaying the message.

Non-skatepark skatepark honorable mention: The basketball courts at Tompkins Square Park in the East Village, known to skaters as the TF, or training facility. This is literally some fenced-in flatground where skaters occasionally drag a box or turn a trashcan on its side to ollie over. And yet, for reasons unexplainable if you discount herd mentality, the place is a magnet for skaters, serving as the warmup and wind-down spot for many a skate jaunt. Then again, skateparks at their best are town squares for skaters, and skatepark criticism aside, sometimes you just want to huck yourself over a trashcan and catch up with your friends.