The 6 Best Gay Parties In NYC

The Supreme Court just shot down DOMA and NYC Pride Weekend is almost here, so bring on the parties and the parades. But while Pride might be the LGBTQ community's biggest weekend of the year, NYC boasts plenty of packed dance nights, innovative performances and other diverse ragers that often eclipse New York's gay bar scene. Here are a few of our favorite LGBTQ parties in the city: we know you'll leave yours in the comments. 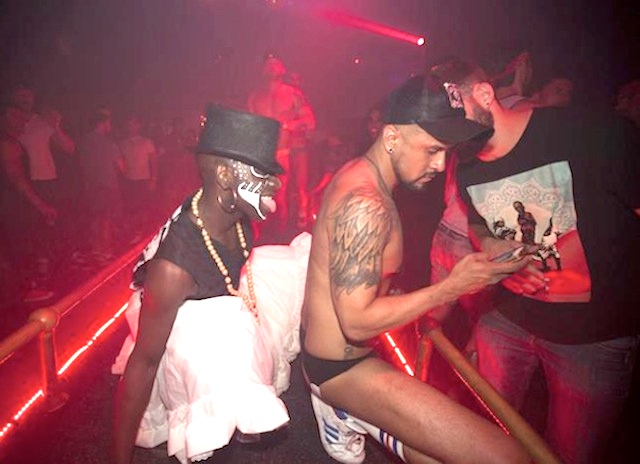 WESTGAY AT WESTWAY: On Tuesday nights, the West Village bar/former strip club is packed with a hip gay crowd for this weekly party hosted by DJ Frankie Sharpe. The party's cover is usually $10, though earlybirds showing up before midnight get a 50 percent discount; expect clubwear finery, scantily-clad dong dancers (remember to tip your dong dancer!) and special guests like artist collective House of Ladosha and Mykki Blanco. Oh, and Lil Kim performed has been known to perform, so there's always the chance for that.

Westgay kicks off every Tuesday night at 10 p.m. at Westway, 75 Clarkson Street between West and Washington Street in the West Village (212) 620-0101, westwaynyc.com). Check their Facebook page for details. 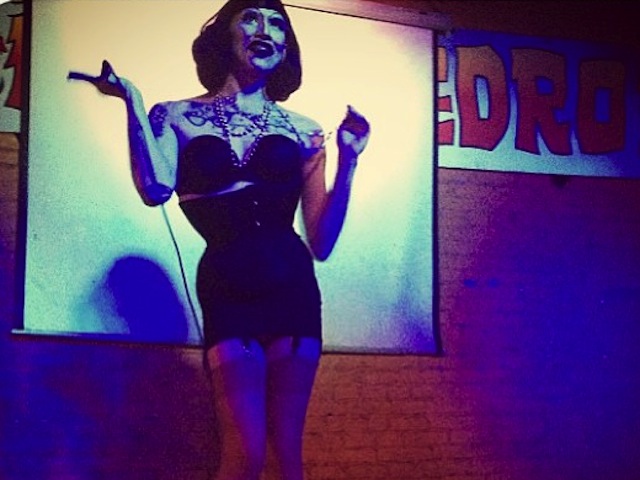 BATHSALTS AT DON PEDRO: Bathsalts is a bit of a different scene from some of the bigger parties, but for the past year, Monday nights in Brooklyn have belonged to drag scene queen Macy Rodman, who takes over East Williamsburg rock bar Don Pedro with her hilarious variety/drag show. Each night boasts its own punny theme—we were once privy to a performer wrapped in plastic for a Twin Peaks pageant, and past themes have included "I Am High Fashion And A Product Of Inbreeding" and "Duane Reade Brand BathSalts." And the party is definitely good for the budget-conscious; there's no fee to attend, and Don Pedro's $3 PBR tallboys and super-cheap well drinks will loosen you up without stealing your cash pre-show. 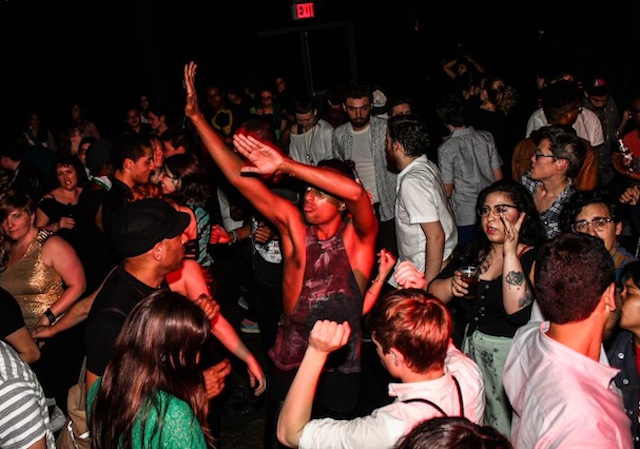 HEY QUEEN Hey Queen's been holding its monthly multi-gender LGBTQ dance bashes in Brooklyn since 2009; it first kicked off its parties at Sugarland in Williamsburg before moving to Public Assembly, and, most recently, Littlefield in Gowanus, and themed ragers have included everything from "Queen of the Damned" to "Alexander McQueen" to "Queen of the Obscene." The soiree always gets going on the dance floor, with super-enthusiastic partygoers grooving to DJs like Amber Valentine and Precolumbian, gogo dancers providing sweet eye-candy and a photographer running around who always manages to get your good side. There's also usually an art installation to go with the event, and performers to go with the theme; covers vary from about $3 to $15 depending on the party, and this weekend's Pride Party (which doubles as the series' anniversary celebration) features a happy hour with cheap drink specials.

Hey Queen is held one Saturday out of every month, now at Littlefield, 622 Degraw Street between Third and Fourth Ave in Gowanus, Brooklyn (heyqueen.org). Check their Facebook page for details. 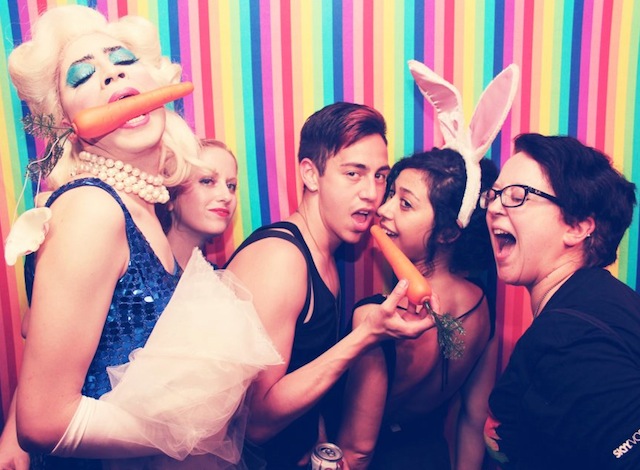 HOT RABBIT: Hot Rabbit started out as a lesbian dance party in the East Village—first at Heathers and then at Nowhere Bar in Alphabet City—before making its way to West Village dance dive Monster. Now, the weekly Friday party's even bigger, and caters to a more mixed-gender crowd, with DJs (like Whitney Day and JD Samson), cheap drinks, go-go dancers and all around revelry. Best of all, if you check Hot Rabbit's Facebook page before heading over, the party's totally free; the organizers post passwords like "Betty White," "Ham Sandwich" and "Sweet Potato" that'll get you through the door at no cost.

Hot Rabbit goes down every Friday at the Monster, 80 Grove Street between 7th Ave South and Sheridan Square in the West Village (boywonderevents.com, 212-924-3557). Follow them on Facebook. 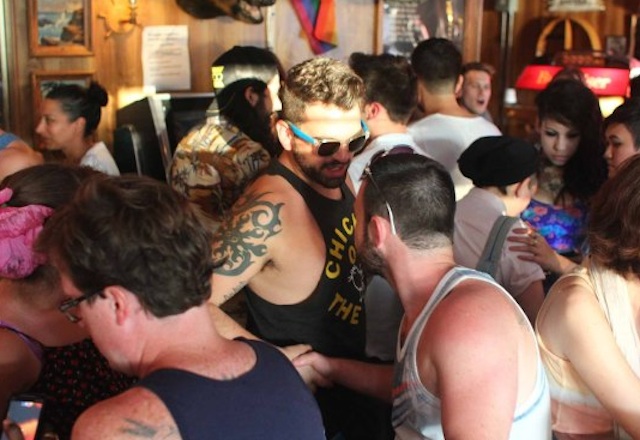 SCISSOR SUNDAYS AT THE RUSTY KNOT: This newish afternoon tea dance series is spearheaded by Le Tigre/MEN's JD Samson, and hits town every Sunday (naturally) at West Village nautical bar the Rusty Knot. The party's a fairly laid-back soiree to bid farewell to the weekend, but there's always music, tiki drink specials and a stellar sunset view. Samson herself usually spins a few sets, and guest DJs have included Amber Valentine and DJ Average Jo; there's no cover to attend, and the shindig runs from 4 to 10 p.m., so you'll be in bed in time to start Monday off with only a mild hangover.

Scissor Sundays is held every Sunday at the Rusty Knot, 425 West Street in the West Village (212-645-5668). For details, check out the event's Facebook page. 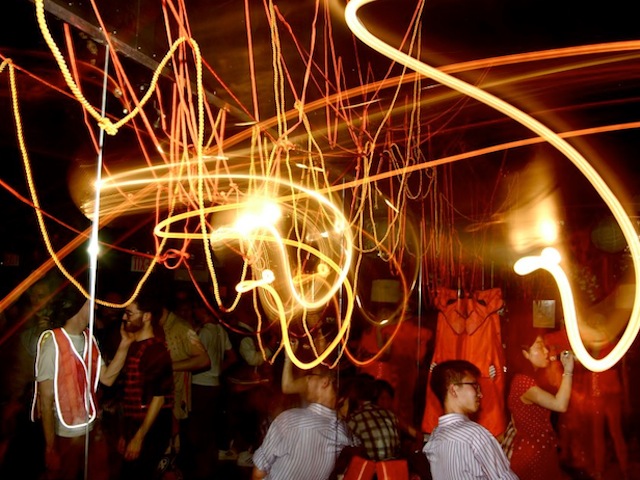 OVA THE RAINBOW AT THE SPECTRUM: Williamsburg LGBTQ community and performance space The Spectrum's been hosting this colorful, artsy and quasi-psychedelic series for the past year and a half. The monthly party is known for its trance-y, dance-y DJs; diverse, oft-costumed crowd; and intermittent performances and art installations—it's also on the cheap side if you're heading over early, with cover running $4-$5 before midnight, and $7-$8 after, along with pre-midnight drink specials. And be prepared to stay late, since the madness has been known to stretch on after dawn.

Ova the Rainbow is held monthly at the Spectrum, 59 Montrose Ave between Lorimer and Leonard Street in East Williamsburg, Brooklyn; check the venue's Facebook page for details, and note that the Spectrum is not a club, but a community space.