The 5 Most Important Elevator Etiquette Rules

Even Buzzfeed couldn't create a complete list of All The Things That Are Worse Than Having To Wait On Line For An Elevator. There are a lot of worse things. 10,000 worse things just happened in the past second. Probably more. Yet here we are, complaining about elevator lines. Or rather, explaining some simple rules of elevator etiquette—which could be a small sprocket in the World Peace Machine. So you're welcome.

The elevators at Gothamist HQ are a gaping hellmouth, and a huge source of frustration if you don't get into the office well before 9 a.m. Before that it's magic hour—everything is smooth. After that you'll find a long line and even longer waits. Your mind will spiral quickly into a Lord Of The Flies mentality, and you'll fantasize briefly about a chaotic society in which anyone can be burned at the stake for bringing a fucking bike one flight up on a crowded elevator. Which brings us to the most important rule of all time when riding the elevator... 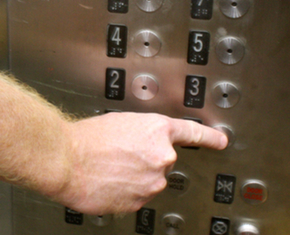 Going up one flight to the Mezzanine level? Really?
DO NOT TAKE THE ELEVATOR IF YOU ARE GOING UP/DOWN ONE FLIGHT

Unless you are carrying something very heavy, are injured, or otherwise physically unable to walk up or down stairs, then you should never be taking the elevator to travel just one flight. You probably shouldn't even take it two or three flights. Walking stairs is really good for you! Getting thrown shade for being the jerk who crammed into the elevator to go one flight is not good for anyone. Elevators filled with bad vibes have a higher chance of plummeting.

With three elevators, and limited lobby space, the people in our building typically form a straight line (which sometimes goes out the door), filing in to the elevators as they arrive, in the order that they got on line. But there is always That Guy who cuts in front of everyone and stands in front of what elevator looks like it's coming first, securing his spot in that elevator. And in Hell. 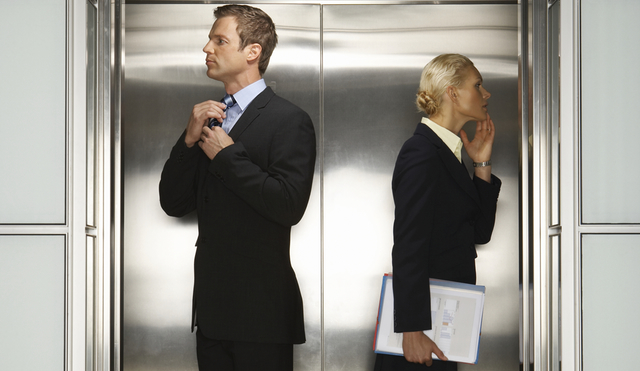 These two get a Gold Star for ignoring each other on the elevator. (Shutterstock)

As humans, we spend a lot of time on earth ignoring other humans. Some may find this sad or unsettling, but this should be embraced. Interaction is often awkward and most of the time just leads to disappointment in your fellow man. And with precious few moments of peaceful solitude in this city, the elevator can be a nice temporary escape from people and noise and The Internet. Unless someone gets on and instead of facing the doors faces you. This happens a shocking amount around these parts, which leads to a never-not-awkward moment of actively avoiding eye contact in a small space. Just stand facing the doors, and we'll get through this thing.

Is your elevator stopping at every floor? Don't make the "Guess we're on the local!" joke, your fellow passengers will suffocate from unoriginality.

THE HOLDING THE DOOR FOR SOMEONE DILEMMA

Who are we but mortal beings to be given such power as a "door open" and "door close" button? Just let Fate handle this one. If the person you hear running towards the elevator was meant to get on, he/she will. This is one of the many things we learned from the 1998 hit rom-com Sliding Doors starring Gwyneth Paltrow.