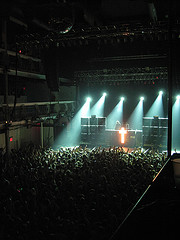 Most Overrated Live Band: Justice
There is no denying the greatness of Justice's album, "Cross," and there is no argument from us that it isn't the type of music that is perfectly suited to be blasted in a massive dance club. But those two things alone do not automatically lead to a good live show. These two are sloppy, to put it simply. Too many changes were missed, beats were a half step off, and the songs didn't mix well together. There was no catastrophic breakdown, but the little things add up. We left Terminal 5 underwhelmed. The light show was cool, though... (pic via pocketmonsterd's flickr)

Biggest "CMJ Stereotype" Stereotype: Ragging on The Black Kids
Listen, this story has been done to death over the last week. The Black Kids EP is fun, they're not that good live, they know it, and they are working on it to get better. Call it the Beirut Syndrome. Word moves so fast these days about up and coming bands that before they even fully realize the attention they're receiving, they're already getting backlash. And somehow this is all the bands fault, as if they were asking for it. While the band's smugness irked us a tad, we reminded ourselves that Wolf Parade bugged the crap out of us 2 years ago too, and we still love them. Consider us much more excited to see The Black Kids at CMJ 2008.

Luckiest Band at CMJ: Midnight Juggernauts
Getting to open for the aforementioned Justice at one of the biggest shows of CMJ to a room full of drugged up teenagers ready to dance? How convenient! The bands whole Spinal Tap-meets-Kasabian thing didn't particularly impress us, but the crowd was losing their minds over it. Lucky them.

Biggest Surprise: The Rosebuds
All along, we thought these guys were just your run of the mill indie rock band. We heard some good songs, but nothing to make them stand too far out. But WOW if they don't kick it up live. Seeing them turn Bowery into an all-out dance party Tuesday night was a total thrill. These three sure pack quite the punch on stage. What a show.

Best Use of Silly Punctuation: Eagle*Seagull
*NSYNC would be proud. While these guys aren't breaking any new ground, they play their fluffy indie pop with a particular energy and ability that is necessary to make a well worn genre sound fresh. And honestly, by the time we saw them at our Gothamist House show Saturday evening -- after seeing band after band using played out spaces to separate the words in their names -- that * was a breath of fresh air. 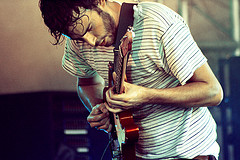 And this year's best...
Bronze: The Maccabees
An album of the year candidate with Colour it In, these guys returned to NYC for CMJ better and more confident than ever. Bonus points for two of them getting spotted at a LES bodega asking the store clerk the proper brown-bagging strategy for drinking a tall boy on the sidewalk.

Silver: iLiKETRAiNS
Also wins worst name of the Marathon, but their Nu-Godspeed power more than made up for it.

Gold: The Foals
American mathrock complements the tired British post Punk formula so well we can't believe it's taken so long to fully incorporate into the sound. This is one music trend we are extremely excited about. (pic via David Bez's flickr)