The 1934 Plan To Fill In The Hudson River, Connecting NYC To NJ

A couple of years ago we looked back at the terrible 1924 traffic congestion solution, in which the plan was to drain the East River. Turns out the people of the past also had big plans for the Hudson. According to this article, published in 1934, engineering scholar Norman Sper proposed damming the river at both ends of Manhattan, and filling in the space... which would "ultimately connect the Island of Manhattan with the mainland of New Jersey."

The 10 square miles of land gained would have, in theory, solved the traffic and housing problems the city was having at the time. There would be more buildings, more streets, and more avenues.

Today there are ten avenues laid out along the length of Manhattan. These are crossed by 125 streets. It is the lack of up-and-down arteries which has given rise to the existing traffic crisis. Sper would double the number of avenues.

There would also be more underground action, with the building of tunnels, conduits, mail and automobile tubes, and other subterranean passages. 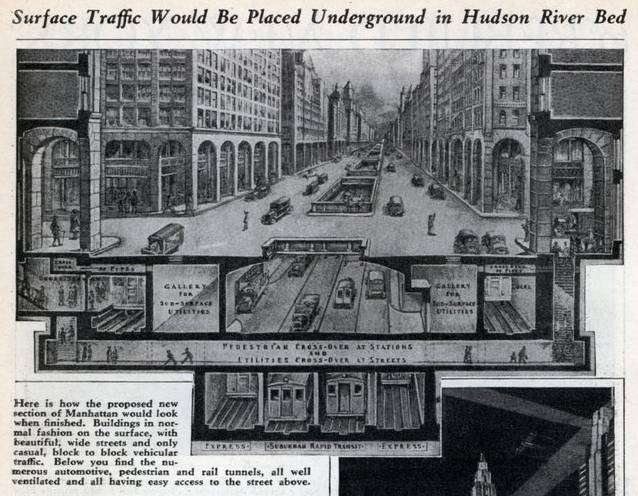 When every possible subterranean necessity had been anticipated and built, a secondary fill would bring the level up to within twenty-five feet of the Manhattan street level. Upon this level would rest the foundations and basements of the buildings that would make up the new city above, planned for fresh air, sunshine and beauty. Thus, below the street level would be a subterranean system of streets that would serve a double purpose. All heavy trucking would be confined to it, but primarily it would serve as a great military defense against gas attack in case of war, for in it would be room for practically the entire population of the city.

A similar plan was proposed in 1931, which would have added subterranean street levels under 2nd Avenue. 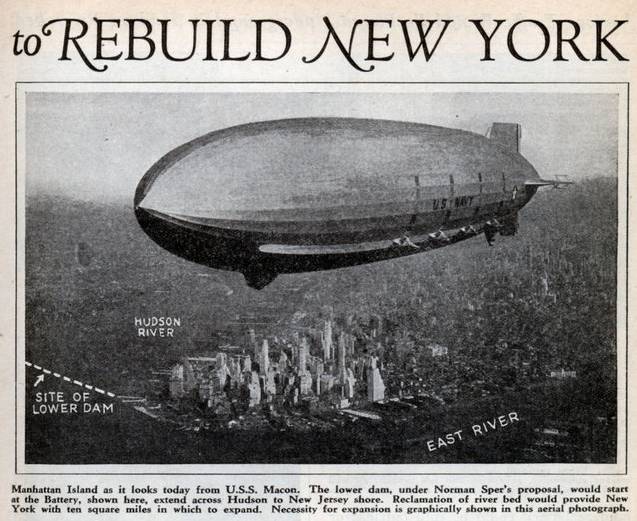 It was estimated that the Hudson River project would cost around one billion dollars, which would have ultimately been the major obstacle had the city decided to go ahead with the plan.

#congestion
#flashback
#history
#hudson river
#norman sper
#plan
#rendering
#traffic
Do you know the scoop? Comment below or Send us a Tip