New York's got museums and galleries a-plenty, but there's still art to be seen outside four-walled establishments (and without having to pay admission). Public art's all over the place, with installations finding temporary and permanent homes in parks, in plazas, and even, in some cases, affixed on the sides of residential buildings. Here are our favorite public art pieces in town; as always, leave yours in the comments. 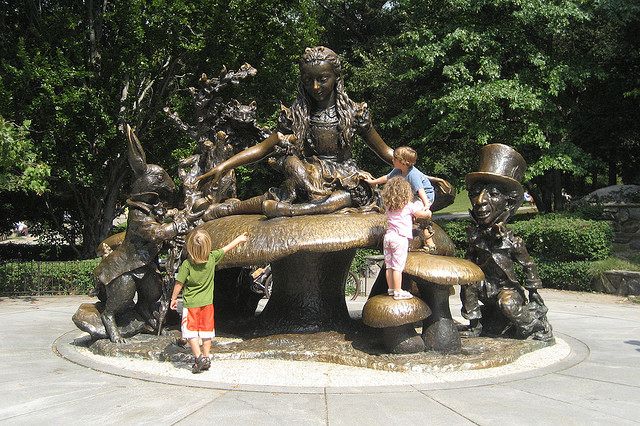 JOSE DE CREEFT: ALICE IN WONDERLAND: Central Park may boast nearly 30 statues, but none are as fun to climb on as Jose de Creeft's Alice, which has been charming NYC's children and childlike adults since 1959. Lewis Carroll's trippy heroine sits on a giant mushroom, surrounded by slightly smaller mushrooms, the Mad Hatter, the White Rabbit, the Cheshire Cat, the Dormouse, Dinah the cat, and a sneakily hidden lizard creature that I don't recall from the books. The sculpture's also circled by a quote from Carroll's poem "The Jabberwocky," which makes way more sense when you're stoned, unsurprisingly.

It's worth pointing out that when I was a kid, visiting Alice was almost as cool as going to Disney World, which is something to keep in mind if you want to trick your spawn into believing you're taking a trip to Orlando.

You can find Alice in Central Park near East 75th Street. 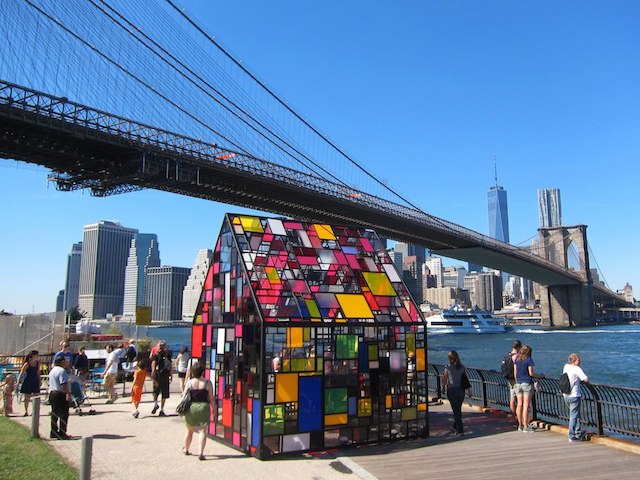 TOM FRUIN: KOLONIHAVEHUS: Fruin's fantastic stained-plexiglas house is still on view at Brooklyn Bridge Park, where you'll be able to catch colorful sun rays during the day, and take in the brightly-lit structure at night through September. The piece is constructed entirely of salvaged materials and modeled after a Scandinavian garden shed, meant to serve as a respite of sorts from urban living. Kolonihavehus was a hit at last year's DUMBO Arts Festival (RIP), where performance artists hung out inside the house doing what performance artists do. Stop by the house now before it departs at the end of the summer.

Kolonihavehus can be found in Brooklyn Bridge Park near Jane's Carousel in DUMBO, Brooklyn. 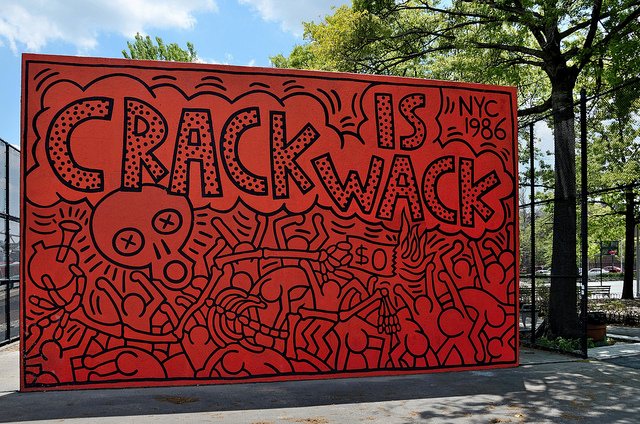 KEITH HARING: CRACK IS WACK: Potentially NYC's most famous mural, Keith Haring's 1986 piece frames a handball court at 128th Street and 2nd Avenue, serving as a permanent reminder of a crack epidemic that crippled some of the city's poorest neighborhoods. Haring didn't have permission to paint this one, but the city's Parks Department has since protected and restored it, and it continues to greet drivers heading into Manhattan via the FDR Drive.

Crack Is Wack is located at 128th Street and 2nd Avenue in East Harlem. 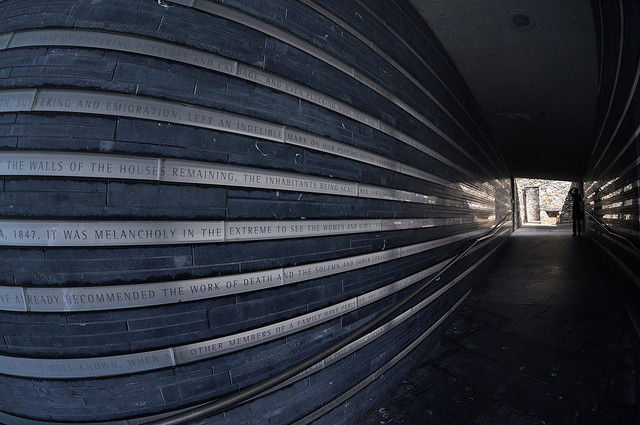 IRISH HUNGER MEMORIAL: It's easy to forget about the Irish Hunger Memorial, a lovely but oft-overlooked installation hidden in the mess that is Battery Park City. But the 13-year-old memorial, a dual effort between artist Brian Tolle and landscape artist Gail Wittwer-Laird, is worth repeat visits—from the outside, the memorial mimics the Irish countryside, complete with a real cottage, native soil, flora, and fauna, and stones sourced from all over the country. An inside passageway features news reports on the 19th century's Great Famine, as well as reports chronicling famines from all over the world. 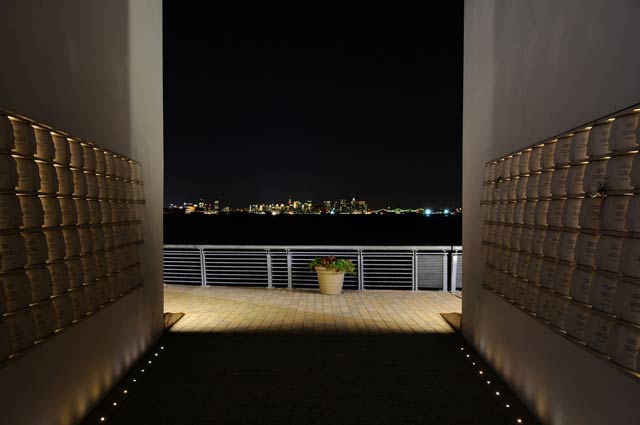 SI 9/11 MEMORIAL, POSTCARDS: A far less touristy offering than the National September 11 Memorial and Museum, Staten Island's touching tribute to those lost on 9/11 was designed by Masayuki Sono and unveiled on the 3rd anniversary of the attacks on the World Trade Center. The piece, comprised of two 30-foot high wings, is intended to evoke two postcards to loved ones, and each victim from the borough is allotted an individual plaque featuring their personal details and a silhouetted profile.

Postcards is located on the St. George Esplanade in St. George, Staten Island. 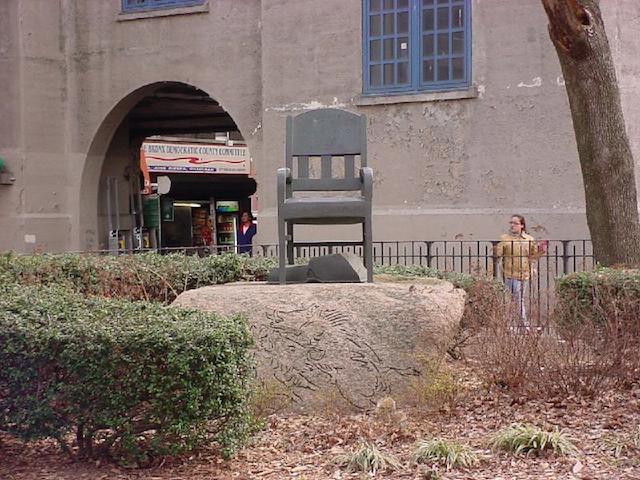 DAVID SAUNDERS: SEAT: Upon first glance, this 1987 bronze sculpture is simple, featuring naught but an armchair and dictionary sitting atop a granite boulder. But David Saunders's piece, which was awarded the 1986 Excellence in Design Award from the New York City Art Commission, boasts multitudes—the boulder's engraved with wild boars, the dictionary shows the “Common Birds of America," the granite is sourced from the quarry responsible for the Statue of Liberty's pedestal, and the piece as a whole is meant to reflect on the importance of taking a minute to sit, think, and rest.

Seat is located in Owen F. Dolen Park at East Tremont Lane and Westchester Avenue in The Bronx. 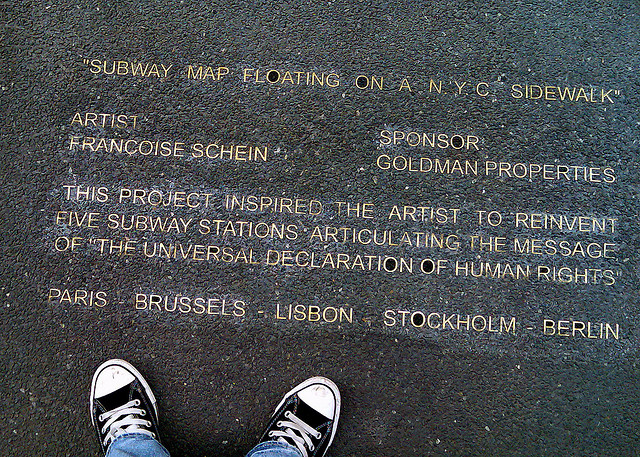 FRANCOISE SCHEIN: SUBWAY MAP FLOATING ON A NY SIDEWALK: One cool thing about Francoise Schein's floating subway map is how easy it is to walk on it without realizing you're trampling all over a piece of art. Now, SoHo's very well-traveled, and it's easy to miss the LED lights and metal inlay when you're sprinting off to Louis Vuitton, or wherever. But back when the piece was installed in 1985, SoHo was still a desolate "artist's colony" of sorts, and the ninety-foot long piece certainly stood out. You can't use Schein's map to navigate the subway, since the Belgian artist reportedly combined old and new systems and restricted her piece to Manhattan, but if you walk along her route, keep in mind that she created the piece as a "declaration of human rights."

Francoise Schein's subway map is located outside the SoHo Building at 110 Greene Street between Spring and Prince Streets in SoHo. 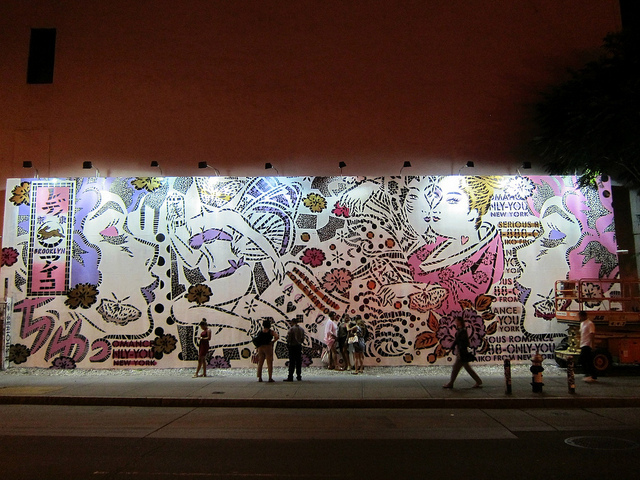 BOWERY MURAL: The Bowery Mural can't be pigeonholed into one artistic category, considering the wall has been decorated by talented artists since 2008, when a real estate developer decided to use it to showcase famed street taggers. Since then, the wall's been graced with everything from a tribute to Keith Haring to standout work by Shepard Fairey, Swoon, and Maya Hayuk. Expect to see a million tourists taking selfies in front of it, but don't let that diminish the quality of its featured work.

The Bowery Mural is at the corner of Houston Street and the Bowery in the East Village. 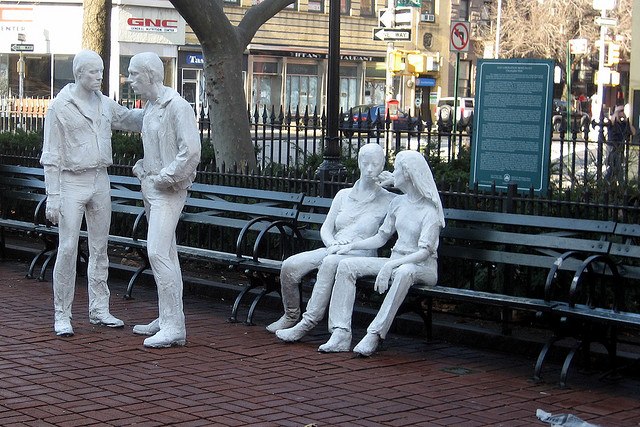 GEORGE SEGAL: GAY LIBERATION: Master sculptor George Segal created this iconic monument, featuring male and female same-sex couples, in order to commemorate the 1970s Stonewall Riot that launched a gay rights movement that's still raging on today. The monument was commissioned in 1979 but wasn't dedicated until 1992 thanks to its "controversial" nature, a move that shows the snail's pace at which the movement's been forced to crawl over the decades. Now, though, Gay Liberation has found a permanent home in Christopher Park, with a second iteration installed at Stanford University's Main Quad.

Gay Liberation is located in Christopher Park at Grove Street and Christopher Street in the West Village. 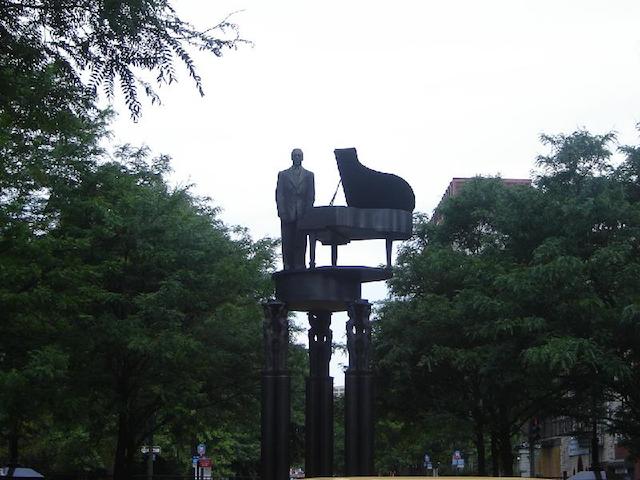 ROBERT GRAHAM: DUKE ELLINGTON MEMORIAL: Robert Graham's tribute to Duke Ellington is relatively new, having been installed at the north end of Central Park in 1997. But it took nearly two decades to get an homage to the jazz giant up, with pianist Bobby Short pioneering the effort back in 1979. Now, the statue—featuring Ellington and his piano being held up by the Nine Muses, sits in the middle of Duke Ellington Circle, surrounded by an amphitheater for musical performances.

The Duke Ellington Memorial is located at 110th Street and Fifth Avenue in East Harlem. 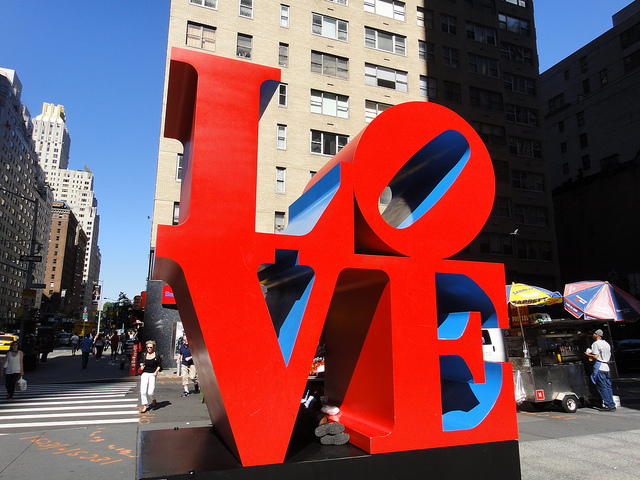 ROBERT INDIANA: LOVE: Robert Indiana's Love sculpture is an iconic piece of pop art that's instantly recognizable from album covers, film spots, and even postage stamps. And it's a photo-op you can't miss if you happen to be strolling down 6th Avenue, where an iteration lives just around the corner from MoMA. Widely reproduced around the world, Indiana said in 1969 that the sculpture is based on the idea that "the word is an appropriated and usable element of art," which harkens back to ideas originally formulated by the likes of Picasso and the Cubists. (Sandra Song)

You can find LOVE at 1359 Avenue of the Americas at 55th Street in Midtown. 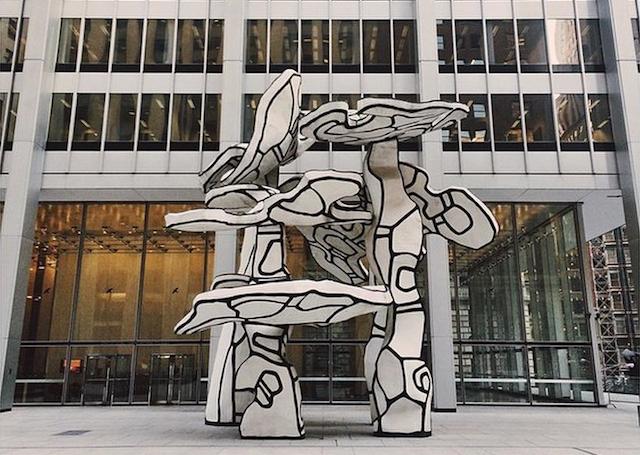 JEAN DUBUFFET: GROUP OF FOUR TREES: French sculptor Jean Dubuffet's had a few pieces floating around this city, including the Welcome Parade sculpture at 590 Madison Avenue and four sculptures from his "Hourloupe" cycle that were installed along Park Avenue in 2003. But Group of Four Trees, which was commissioned by David Rockefeller and completed by Dubuffet in 1972, offers an intriguing treat for pedestrians strolling through the Chase Manhattan Bank Plaza, the black-and-white work blending in with the similar white-and-black steel that makes up the skyscraper behind it.

Group of Four Trees is located off Pine Street between Nassau and William Streets in the Financial District. 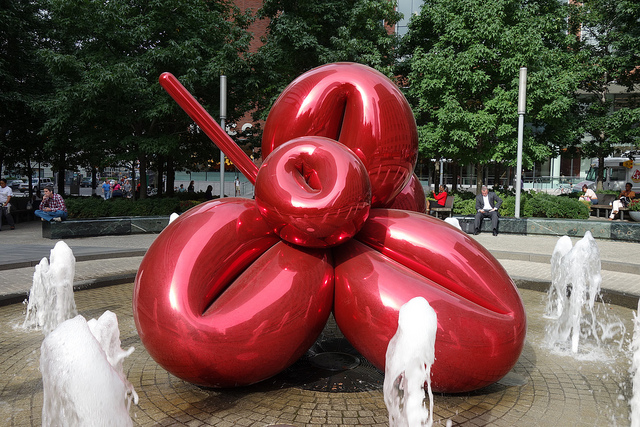 JEFF KOONS: BALLOON FLOWER (RED): Jeff Koons' Balloon Flower (Red) is a polished, post-pop masterpiece that beckons to viewers from the shadows of One World Trade Center, and serves as a popular resting point for visitors of the 9/11 Memorial. Koons, who's received international acclaim for his kitschy reproduction of everyday objects, is known for his post-pop pastiche that questions art's role in the modern, media-driven era. Playful and overstated, Balloon Flower also provides an undertone of reflective contemplation thanks to its mirrored exterior and brash appearance in real life. (Sandra Song)

Balloon Flower (Red) is located at the plaza at 7 World Trade Center in Lower Manhattan. 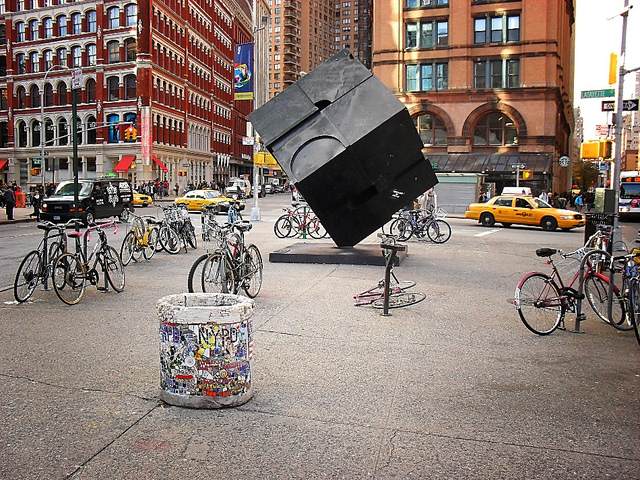 TONY ROSENTHAL: ALAMO: Popularly known as the Astor Place Cube, Tony Rosenthal's Alamo is a steely East Village staple commended by critics for its jutting edges and geometric indentations. However, it's probably best known as an iconic rendezvous point for New Yorkers getting off at the Astor Place 6 station. Bonus: it can also be spun around by visitors for show, so once you find your friends, work together to give it a whirl. Note that it's currently in hiding while Astor Place undergoes street renovations, but will hopefully return soon. (Sandra Song)

The Astor Place Cube can usually be found in Cooper Square at Lafayette Street in the East Village, though it has been taken away temporarily. 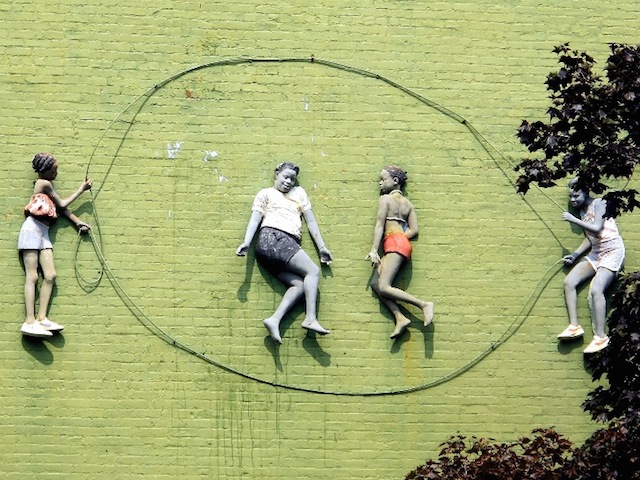 JOHN AHEARN & RIGOBERTO TORRES: SOUTH BRONX SCULPTURES: Sculptors John Ahearn and Rigoberto Torres made casts of Ahearn's real life South Bronx neighbors back in the 1980s, installing a series of them on a couple buildings in the neighborhood just a few years ago. Though there's been some controversy over the pieces, the bronzes are still a sight to behold in the area, with two pieces—"Double Dutch" and "Life on Dawson Street"—on display.

You can spot Ahearn and Torres's bronzes on Intervale Avenue at Kelly Street and on Dawson Street at Longwood Avenue in the South Bronx. 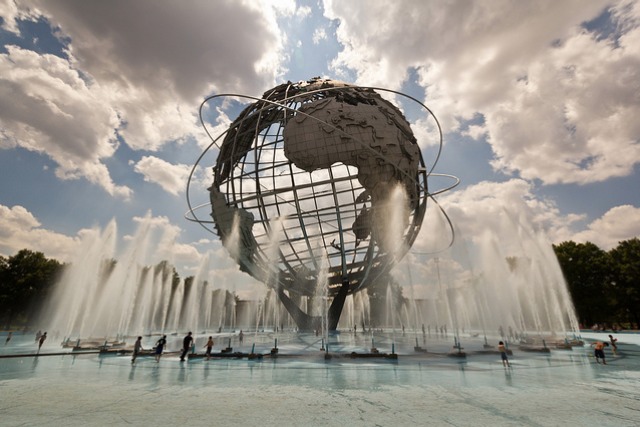 THE UNISPHERE It may have been cinematically destroyed by a bug from another planet, but this lovely work created as a symbol to world peace and global interdependence has been holding court in Queens's Flushing Meadows-Corona Park since 1964. Designed by architect Gilmore D. Clarke, the aluminum-based structure was built as the symbol of the year's New York World's Fair, dedicated to "Man's Achievements on a Shrinking Globe in an Expanding Universe"—makes its appearance in Men In Black all the more appropriate!

The structure fell into disrepair in the following decade, but was brought back to prominence in the mid-90s, when it was officially declared a landmark of NYC. Now, its exuberant fountains and manicured grounds host fair weather revelers from all over the city to bask beneath what has become the iconic symbol for the borough of Queens. (Nell Casey)

The Unisphere is located within Flushing Meadows-Corona Park in Queens

BLASTS FROM THE PAST: Though all the art listed above is currently on display (save for the Astor Place Cube, which is expected to return), the city's seen some stellar public art installations that have since been...uninstalled. Those include, but are not limited to: The Gates, Wheatfield, Louise Bourgeois in Rockefeller Center, and Olafur Eliasson's NYC Waterfalls. And though we've mostly left street art off this list, let's all take a moment to remember dearly departed 5 Pointz, which will one day be commemorated by becoming a giant condo development like everything else in this damn town.