The 14 Best Movie Theaters In NYC

With outdoor bar season coming to a close, it's time to turn your attention towards activities that'll protect you from whatever impending Polar Vortex we face. Let's go to the movies! We rounded up the best movie theaters in the city last year, and we're back again for another go; here are our favorites, and be sure to leave yours (and your traumatic cinema bedbug stories) in the comments. 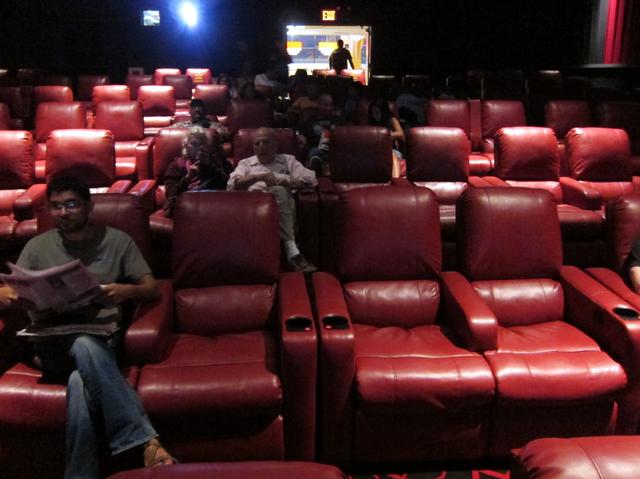 AMC LOEWS 84TH STREET: Best Turnaround
Last year, we awarded this UWS cinema with the dubious "Worst Movie Theater" title, thanks to its tendency to provide patrons with all-around harrowing moviegoing experiences. But Loews 84th Street underwent renovations soon after our devastating takedown, and HOO BOY is it beautiful now! The old screens were replaced with crystal-clear digital ones, the sound systems were upgraded, and the six theaters are impeccably clean. Best of all, all those broken, ostensibly rat-bitten seats were replaced with plush motorized recliners that you can RESERVE IN ADVANCE, ensuring you do not have to show up an hour early to get a seat on a Saturday night. God bless you for this contribution to society, AMC Loews Fat Cats. God bless you. 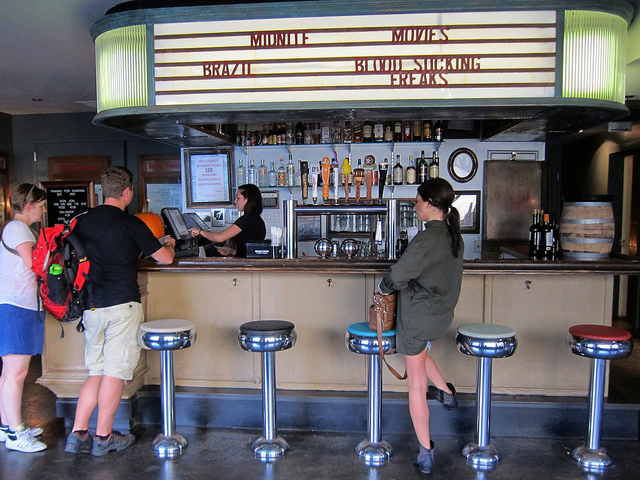 NITEHAWK CINEMA: Best Movie Theater With A Bar
Heavy imbibing during a movie isn't always a great idea—can anyone tell me what Coraline was about?—but Nitehawk's swank dining, drinking and movie-watching combo experience is well worth the odd forgotten plot point. Nitehawk's inconspicuous waiters offer up popcorn ($6), tater tots ($7) and other cinema goodies pre-and-during your movie, along with creatively themed fare for specific films ("Want Another Queso?" for Boyhood, "Jenson's Fritters" for The Skeleton Twins). And of course, if it's booze you're after, Nitehawk boasts a full gamut of beer, wine, liquor and specialty cocktails, plus they've got two bars on the premises. Don't black out before the coming attractions. 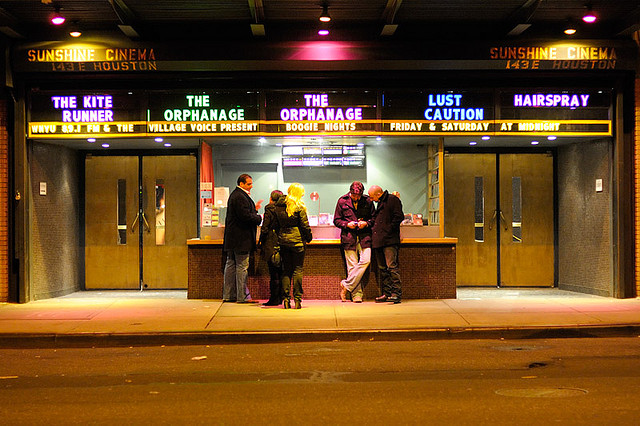 LANDMARK SUNSHINE CINEMA: Best Midnight Movies:
Sunshine's worth snaps alone for their independent film offerings and delectable, buttery popcorn. But in a city full of art house theaters, Sunshine stands out from the pack thanks to its spectacularly fun midnight screenings of cult films and old school classics. We've seen everything from The Room (which screens here frequently) to The Warriors to Space Jam here, and the midnight theatergoers are always enthusiastic fans. Memorize all the lines before you attend, lest you stand out in the crowd.

Sunshine Cinema is located at 143 East Houston Street between Forsyth and Eldridge Street on the Lower East Side (212-330-8182, landmarktheatres.com). 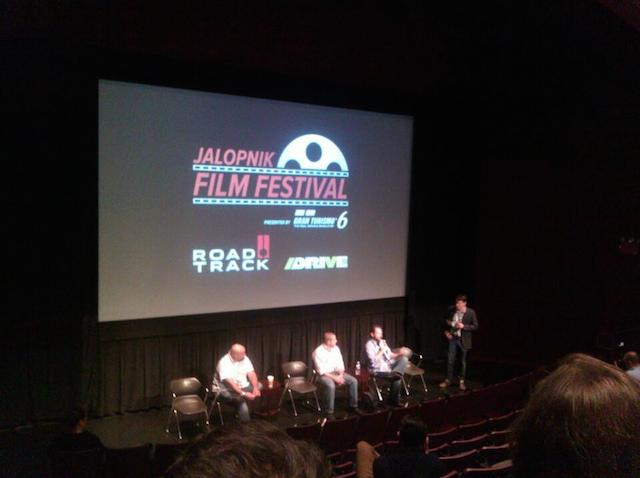 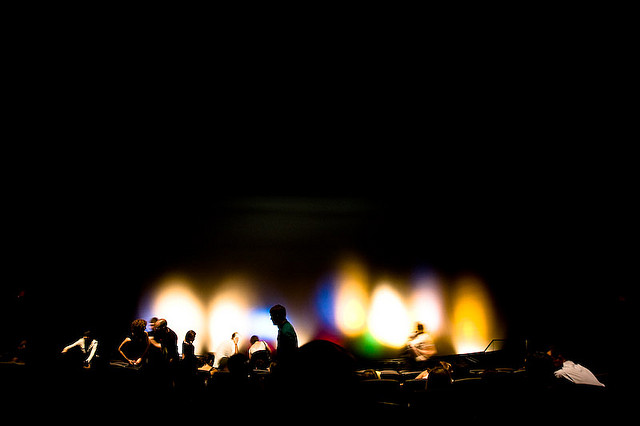 AMC LOEWS LINCOLN SQUARE 13: Best IMAX
This Lincoln Square cinema's massive screen was the nation's first IMAX multiplex installation when it debuted in 1994, way back before every commercial movie under the sun got a 3D release. And though thousands of poor imitators have sprung up around the world, the OG IMAX is still the REAL DEAL, and most of us agree it's the only one worth shelling out upwards of $20 for. The theater boasts 600 nearly-comfortable seats, and you can now reserve the exact seats you want in advance. Take it from Louis CK, those giant blue 3-D numbers are better than sex. 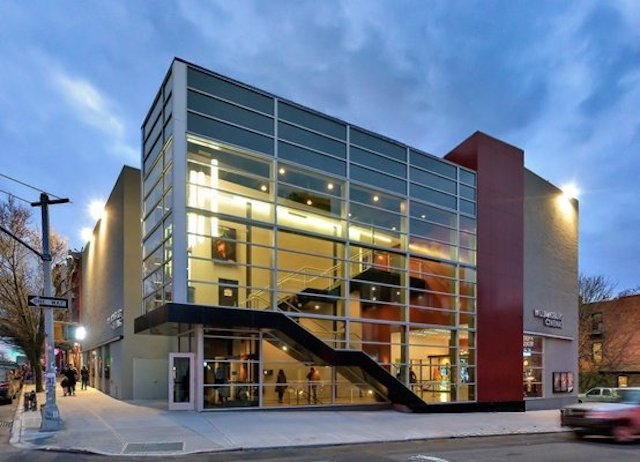 WILLIAMSBURG CINEMAS: Cruelest Bag Check Policy
Did you know that first-run theaters in this horrible city will charge as much as $15 per movie ticket? Sweet Lord, that is HIGHWAY ROBBERY. But Williamsburg Cinemas, which debuted on Grand Street in 2012, charges only $11 for general admission, which makes it a solid rainy Sunday destination even for those on a budget. Plus, if you happen to have weekdays off, you can catch a 2 p.m. matinee for a smooth $8. That alone warrants Williamsburg Cinemas a spot on this list, especially since it's the biggest first-run theater in hipster yupster-packed North Brooklyn these days. But patron, beware: if you're found with ONE water bottle, half-eaten sandwich or surreptitious 40 of Modelo Especial in your bag, the Williamsburg Cinemas security team will take it away from you and shame you in front of everyone else waiting on line to see Gone Girl. You will get your food and booze back at the end of the movie, but the sting will stay with you for life.

Williamsburg Cinemas is located at 217 Grand Street between Bedford and Driggs Avenues in Williamsburg, Brooklyn (718-210-2955, williamsburgcinemas.com). 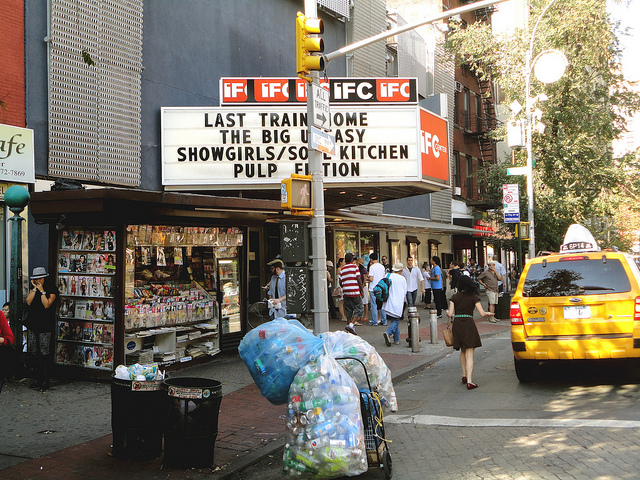 THE IFC CENTER: Best Art House Theater
Way back in 2005, the historic Waverly Theater was transformed into the IFC Center, a state-of-the-art theater featuring five cinemas, a vintage poster gallery and a hip repertoire of documentaries and independent and foreign films. Just a decade later, the IFC Center's earned its stars as the city's best art house theater, screening an eclectic mix of movies in addition to midnight cult favorites and special programming. Make sure you check out IFC's long-running Stranger Than Fiction series, which focuses on documentary films and shorts. 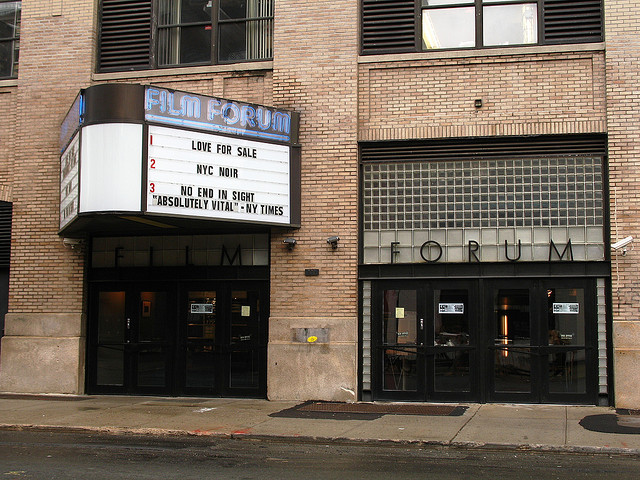 FILM FORUM: Best Repertory Movie House
Okay, so Film Forum isn't the snazziest movie theater in the city, or the cleanest, or the most comfortable. But this venerable cinematic institution, which has existed in some form or another since 1970, deserves fealty for its solid mix of old school films it continues to serve up— right now you can catch the tail end of a Tennessee Williams series, and films like Vertigo and The Cabinet of Dr. Caligari are next on tap. Film Forum's also the city's only autonomous nonprofit cinema, so taking in a flick here helps keep its curated film selection top notch. Become a member, and get a significant discount on all your movie tickets. 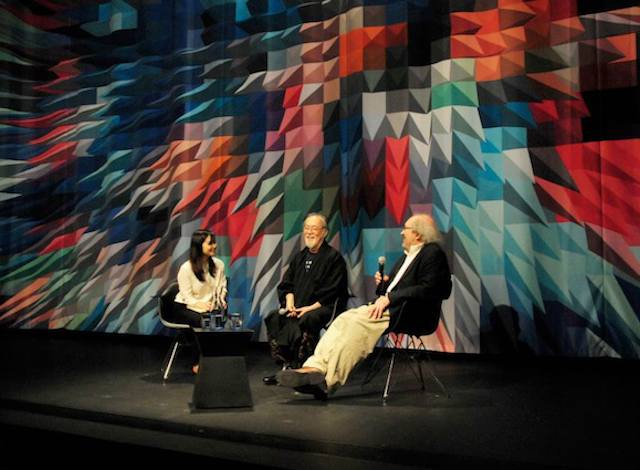 MUSEUM OF THE MOVING IMAGE: Best Museum Screenings
This category forced a hard battle between the Museum of the Moving Image and the Museum of Modern Art, and though we love MoMA's vintage films, MoMI's selection eventually won out. The museum frequently screens movies from every genre, with recent offerings including The Phantom Tollbooth, Brokeback Mountain and Hiroshima 28. Films are often bookended by live discussions and Q&As, plus it's fun for theatergoers to pair cinematic offerings with a visit to some of the museum's spectacular movie-centric exhibitions. 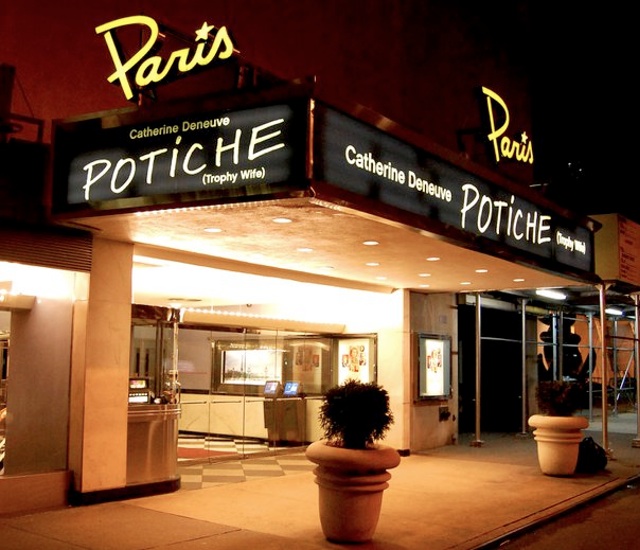 PARIS THEATRE: Best Jewel-box Cinema
There aren't a lot of classic cinemas left in the city now that the corporate megaplexes are boxing everybody out. But this single-screen theater located right by the Plaza Hotel is still going strong, serving as a reminder that the cinematic experience was once a little more elegant than what the Fandango masses have left us with. Plus, isn't it a relief not to have to deal with all those pesky choices? Right now, the Paris is screening The Disappearance of Eleanor Rigby, and you can purchase your ticket for a mere (ha!) $14. Try to sit in the balcony. 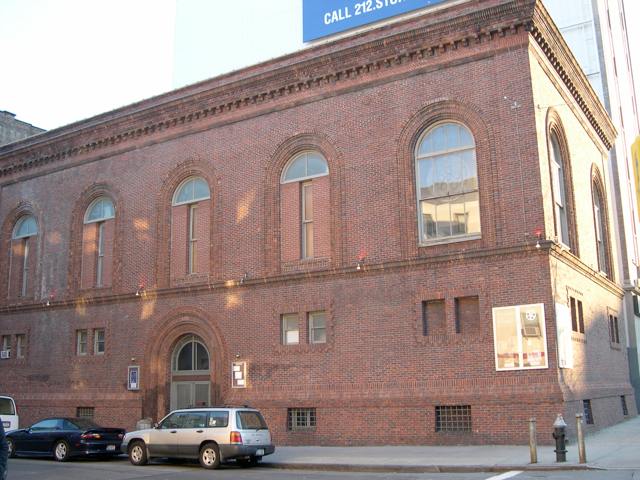 ANTHOLOGY FILM ARCHIVES: Best Avant Garde Cinema
As the name suggests, Anthology Film Archives isn't just a movie theater. The 45-year-old institution archives and preserves some 20,000-plus avant-garde and experimental films, a rare and admirable task in this digital age. Luckily for the rest of us, Anthology shares its stash, screening nearly 1,000 programs from its obscure collection annually. Outside its collection, Anthology also offers a NewFilmmakers series, which is run by New York University film students and showcases films, shorts and documentaries by budding filmmakers that haven't yet made it into larger film festivals.

Anthology Film Archives is located at 32 2nd Avenue at 1st Street in the East Village (212-505-5181, anthologyfilmarchives.org). 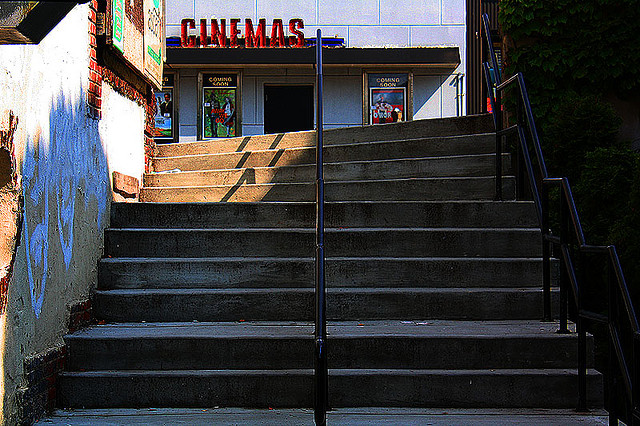 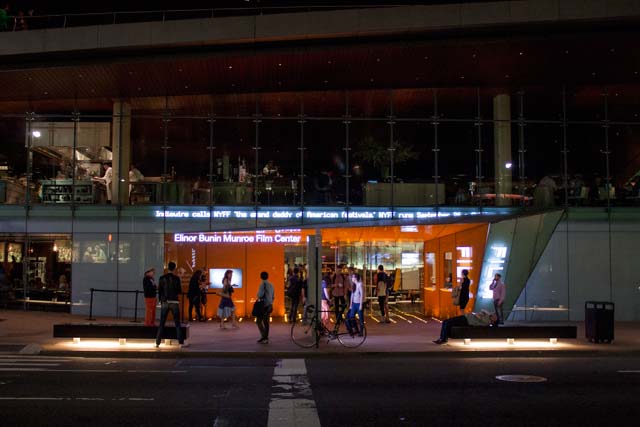 FILM SOCIETY OF LINCOLN CENTER: Best Programming
Lincoln Center's spectacular film programs are perhaps best known for playing host to the New York Film Festival every fall. That major showcase aside, though, Film Society screens everything from eclectic independent films to foreign movies to cult favorites, complete with star-studded Q&As and discussions. Their John Waters retrospective last month was a major highlight, and upcoming series include a Lav Diaz retrospective and a documentary by Joy Luck Club director Wayne Wang. 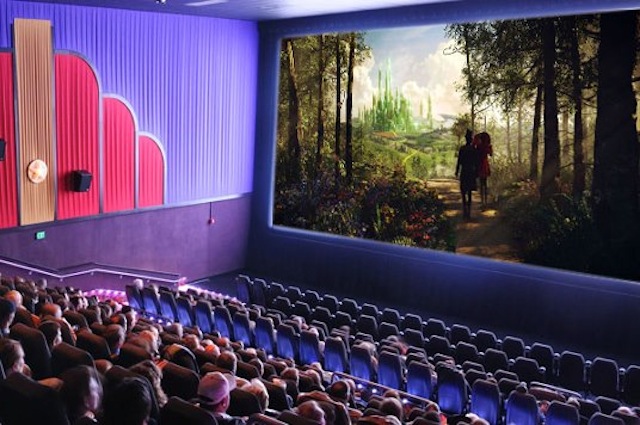 REGAL BATTERY PARK: Best Empty Theater
Here's an open secret about Regal Battery Park—it's not that crowded. Though this oft-overlooked first-run theater screens the same blockbuster films as the city's other big megaplexes, it's still easy enough to score a last-minute ticket here, even after the rest of the AMCs and such are all sold out. I mean, stay away, this place is terrible! It's not like there's a Shake Shack nearby or anything.