The 12 Best Gay Bars In NYC

Now more than ever, the importance of the gay bar cannot be overstated. As President Obama put it, these gathering places are for more than "to be with friends, to dance and to sing, and to live—it is a place of solidarity and empowerment where people have come together to raise awareness, to speak their minds, and to advocate for their civil rights."

Lucky for us, the city is packed with a variety of LGBTQ bars as unique and diverse as the community itself. There are plenty of places to soak in some herstory, belt out showtunes alongside a handsome pianist or add a few new stains to an already questionable couch.

Not sure where to start? We’ve got 12 of New York's best LGBTQ bars below where you can rub elbows (among other parts) with your fellow queers. Celebrate Pride month at some of our favorites, and leave yours in the comments. 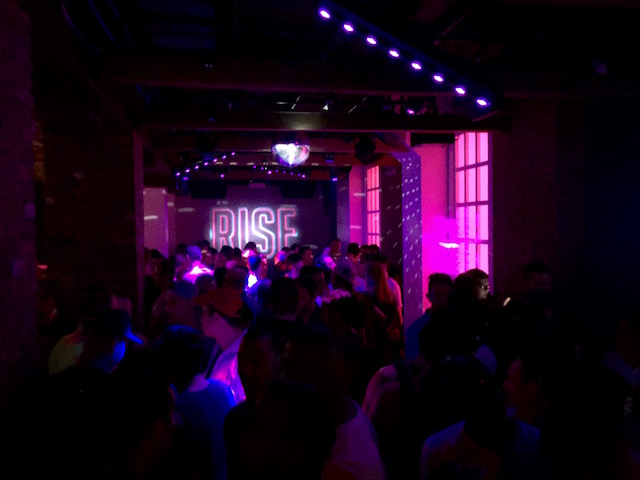 RISE BAR: One of Hell’s Kitchen’s newer additions, Rise offers a sleek, open interior, perfect for dancing or taking in a show. A recent Saturday night saw the dancefloor packed with young, hot twenty-somethings getting down to the latest pop hits while trying to stealthily Snapchat pics of the sexy, shirtless bartenders. Rise’s calendar features the usual collection of karaoke nights and drag performances, but check out happy hour, featuring $3 beers and $5 well drinks 4 p.m. - 9 p.m. daily. 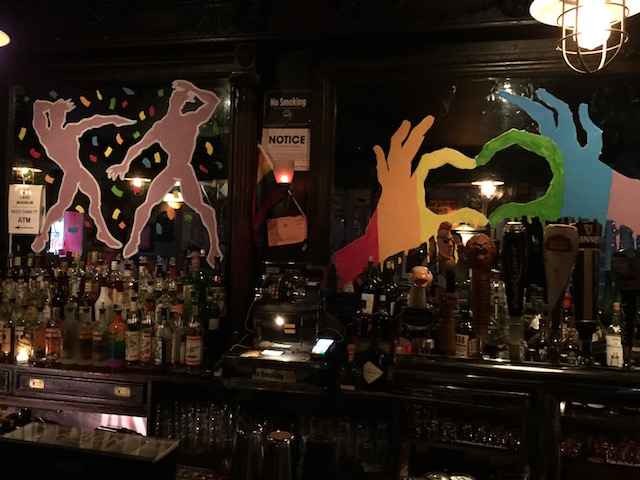 PHOENIX: A friend of mine put it best when he said, “Phoenix on Fridays has the monopoly on cute guys.” Pretty boys pack this East Village staple weekly to kick off their weekend mixing and mingling under the red lights. The popular party may be the bar’s hottest attraction, but pop in on any night of the week to knock back a few reasonably-priced drinks, play pool or hit up the Ms. Pac-Man arcade game. 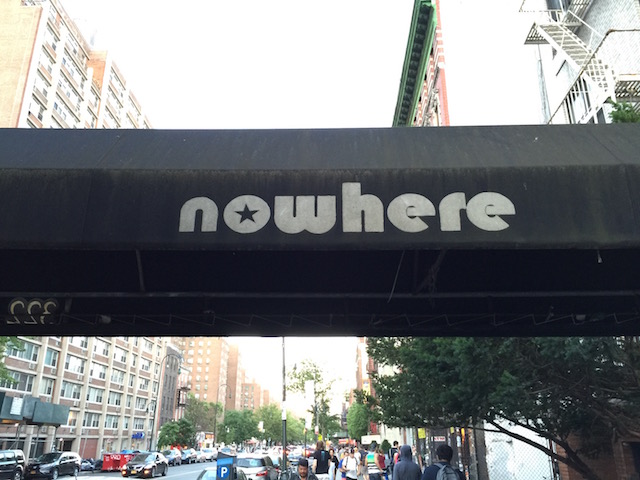 NOWHERE: Nowhere gets a bad rep for drawing an older, bearier crowd, but that’s exactly why we love it. The no-nonsense attitude draws a friendly mix of bearded, burly patrons, especially for the popular weekly Tuesday night party, Buddies. Even if you don’t land that sexy daddy or hunky bear, you could still grab a slice at Artichoke Pizza down the block, and, really, that’s not a bad way to end a night. 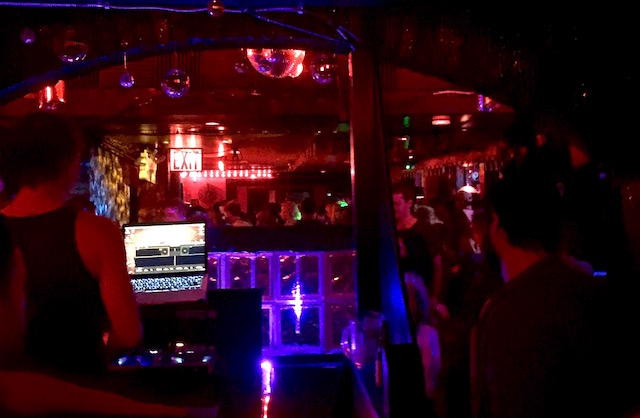 METROPOLITAN: There’s a lot to love about this Brooklyn institution. For starters, the massive back patio alone is worth taking the L train (and may even be enough to warrant learning the bus system when the L’s shut down for repairs). Inside, there’s a fireplace for the chilly winter nights, plus comedy shows, drag performances and one of the most fun karaoke nights in New York. Sure, the crowd skews a little “hipster” given the location, but the vibe is friendly, not fussy.

Metropolitan is located at 559 Lorimer Street between Devoe Street and Metropolitan Avenue in Williamsburg, Brooklyn (718-599-4444, metropolitanbarny.com). 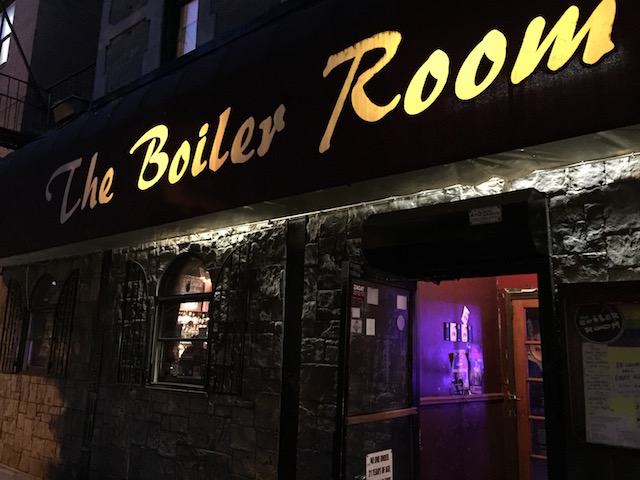 THE BOILER ROOM: Dirt-cheap drink specials and one of the best jukeboxes around cement this dive bar’s status as a local favorite. The no-frills space attracts a crowd that would probably self-identify as “straight-acting” or “masc4masc”, but with track after track by Whitney, Mariah and Robyn (seriously, we’ve heard upward of five Robyn songs in one night) pumping from the jukebox, you’re not fooling anyone. 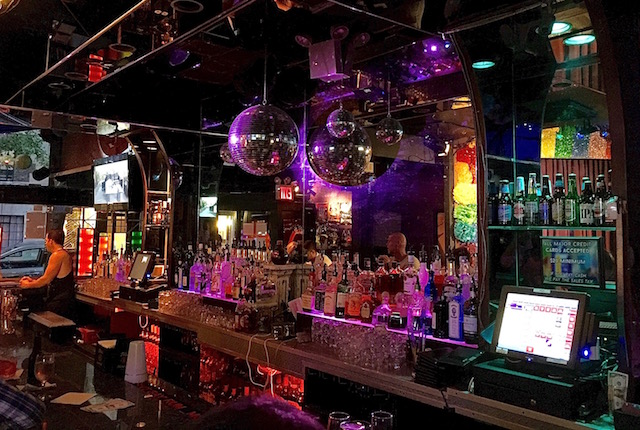 PIECES: You want to be a star, don’t you? Prove it at Pieces’ karaoke, where belters take the sparkling stage and sing their little gay hearts out. When aspiring idols aren’t hitting the high notes, drag queens preside over bingo as classic Broadway clips and campy cinema play on the screens. (We recently spotted Galaxy Quest, starring Sigourney Weaver, Tim Allen and Alan Rickman, onscreen.) There are enough disco balls, glitter and rainbows to choke a herd of unicorns, which keeps the atmosphere light and fun.

Pieces is located at 8 Christopher Street between Greenwich Avenue and Gay Street in the West Village (212-929-9291). 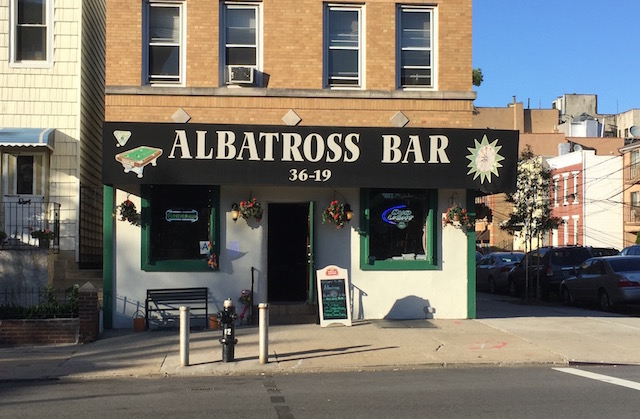 ALBATROSS BAR: You could describe the decor of this unassuming neighborhood bar as “none.” The upshot is you could say the same of the attitude. Friendly, chatty bartenders give the impression that this is the kind of place where everybody knows your name, which is convenient because they’re pouring strong two-for-one drinks during the daily happy hour 5 p.m. - 8 p.m. and you’re likely to forget yours. A modest stage hosts drag shows, karaoke and a weekly Thursday open mic. 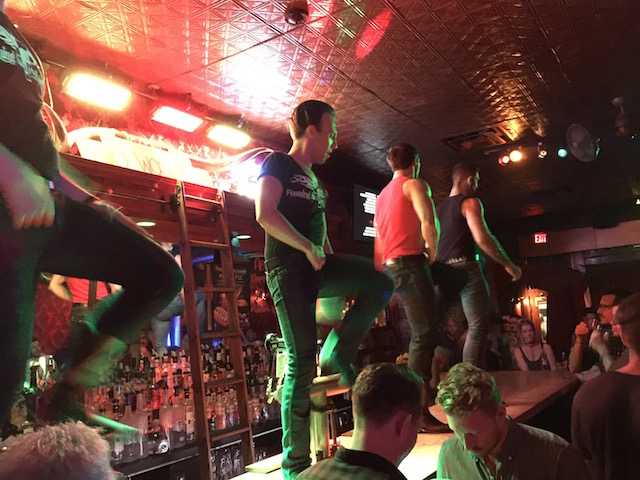 FLAMING SADDLES SALOON: If you need a break from endless house remixes and Ariana Grande, you’ll find all an all-country playlist here. When they’re not slinging frosty beer mugs, the bartenders—in tight jeans and cowboy boots—hop on the bar and dance like a gay, Western Coyote Ugly. It’s hard not to have a good time when a handsome ranch hand looking guy is boot scootin’ boogying to Carrie Underwood. Of course all this spectacle tends to attract some of the bachelorette party crowd, but a sign behind the bar reminds them, “Straight Women: No Woohooing.” 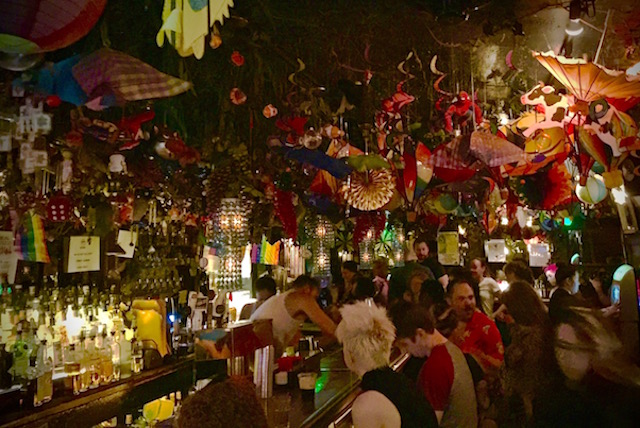 CUBBYHOLE: Bravo honcho and gay demigod Andy Cohen counts this West Village lesbian bar among his favorites in New York City. While primarily a lesbian bar, Cubbyhole makes everyone feel welcome regardless of gender or where you land on the Kinsey Scale. The ceiling is festooned with all sorts of flotsam, like paper lanterns, balloons and plush toys, contributing to the fun, funky vibe. The jukebox provides a steady stream of excellent music, including Depeche Mode, David Bowie and Prince. 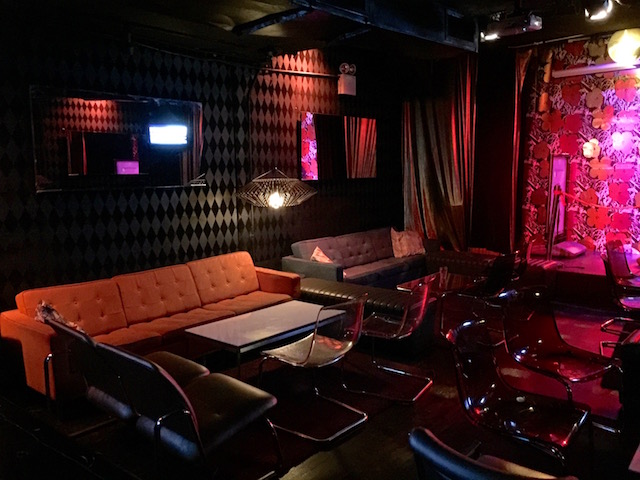 BARRACUDA: Look for the red light over the door of this Chelsea stalwart. Decades after its opening, Barracuda still serves up the welcoming atmosphere of a local dive with a stylish twist. The pop art-inspired stage has hosted popular performers like Candis Cayne, Sherry Vine and the winner of RuPaul’s Drag Race season eight, Bob the Drag Queen, while the sofas in the lounge area make it a great place to hang with friends or snuggle up next to a handsome stranger.

THIS N’ THAT: Some of New York’s most innovative drag shows are happening at this artsy, hipster haunt. Queens like Ruby Roo and Ragamuffin can be seen regularly performing in this bunker of a bar. In addition to the cutting edge queens, This N’ That has attentive bartenders, heavy pours and the patrons most likely to be sporting a septum piercing.

This N’ That is located at 108 North 6th Street between Wythe Avenue and Berry Street in Williamsburg, Brooklyn (718-599-5959, thisnthatbrooklyn.com). 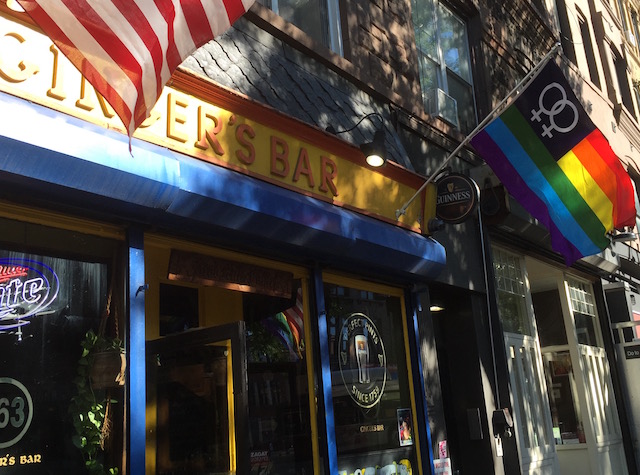 GINGER’S: Jukebox? Check. Pool table? Check. Daily shot specials? Check. This lesbian bar in Park Slope has everything a good neighborhood bar should. If the interior decor —featuring a few topless photos of Blonde Ambition-era Madonna and the girl-on-girl “Kiss” poster that adorned so many college dorm walls—doesn’t do it for you, enjoy the great outdoors in The G-Spot’s back patio/garden area.

Bobby Hankinson is a writer and comedian living in Brooklyn. Buy him a vodka soda at any of the bars above and he’ll probably make out with you. Follow him on Twitter here.

#best gay bars
#best of gothamist
#gay bars
#LGBTQ
#lgbtq bars
#pride week
#original
Do you know the scoop? Comment below or Send us a Tip