Earlier this month, a duck very rarely spotted in these parts was seen over in the Central Park Pond area. The natural assumption was that the male Mandarin duck—which sports a band on its leg—had escaped from the Bronx Zoo, but a rep for the Zoo confirmed with us at the time that it was not theirs. Soon after, Central Park's Urban Park Rangers attempted to find and rescue the non-native duck, to no avail.

And it seems no one has rescued in the weeks that followed. Last week the duck was spotted at the 79th Street Boat Basin, and today he's made it down in the 50s. If you want to see him, now's your chance—he was last spotted at the Pond at 59th Street earlier today.

David Barrett, who runs the Manhattan Bird Alert Twitter account, told us today that this appears to be the same duck, with the same leg band. Barrett believes "this one duck has been roaming around the area... Usually, domestic ducks cannot fly even ten feet, [but] it seems that this one can fly long distances, which explains why it disappeared from the Pond last time after one day." He also noted that if it can in fact fly longer distances, then "the possibility that it escaped captivity comes back into play."

While harboring ducks is illegal in NYC (looking at you Joey and Chandler), it's possible it came from here anyway, or elsewhere in the Tri-State Area. And while Mandarins are rare in the U.S. (there are some feral communities out on the West Coast, which were started by ducks that escaped captivity), you can purchase them online, which seems incredibly wrong.

Will the Central Park Mandarin Duck take off again? Ducks are migratory, but Barrett says "domestic ducks, particularly those across the world from their natural habitat, do not usually have the migration instinct." He believes this guy can "easily handle NYC winter cold as long as it has open water... and the artificial water flow [at the Pond] provides a small patch of open water even during protracted severe cold." 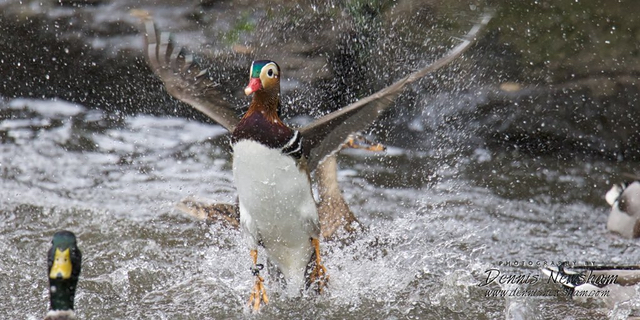 Important Duck Update: The duck was photographed about to take flight (don't leave us, Duck.)

#central park
#duck watch
#mandarin duck
#original
Do you know the scoop? Comment below or Send us a Tip