Cimillo arrives back in NYC. (Screenshots)

Our favorite stories are the ones about someone defiantly walking away from the restrictive demands of a normal life, about tossing a lit match at your daily routine as you stroll away from it, grabbing a couple road sodas as you disappear down the plane's emergency slide. Perhaps the most endearing of those stories played out in 1947, when NYC bus driver and Bronx native William Cimillo, 38 years old, got in his bus and just kept on driving... all the way to Florida, where he would bathe in the moonlight in the Atlantic Ocean.

Cimillo became a national hero, appearing on TV and radio to tell his story once he was back in the city, where he was allowed to keep his job. Two years after the incident, he recapped his journey all over again for Faye Emerson.

Cimillo told Emerson, "I was on the job for about 20 years and I really got tired of it all, up and down every day, the same people, the same stops, nickels, dimes, transfers... Well I thought I'd try something different, a new route... I come out of my garage and instead of making a right turn, I made a left turn. So I made this left turn and went west towards George Washington Bridge. It was a beautiful morning, sun was shining. I stopped for breakfast, and decided to take a little ride... before I knew it I was right in front of the White House." 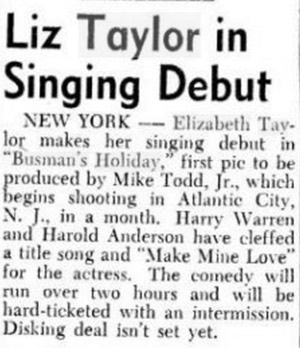 Cimillo was picked up in Hollywood, FL by detectives and a mechanic about two weeks after that sunny morning when he took a left. The group all rode back to NYC together, where Cimillo was removed from the driver's seat and placed in handcuffs. Charges were eventually dropped, as Cimillo's folk hero status rose (although his family never found his disappearance very amusing).

We reached out to the NYCT Museum to find out if his bus, No. 1310, is still around in storage, and we were told: "Bus 1310 is not in the Museum’s Collection so I have no way to access information about its life after Florida."

According to the NY Times, in 1958 "Elizabeth Taylor and her stepson Michael Todd Jr. announced plans to make a movie about the Cimillo adventure: Busman’s Holiday. Ms. Taylor was to play a beauty pageant winner who joined the bus driver on his journey, and was to make her singing debut in the picture. But whatever happens when deals like this fall apart happened—in one account, the script burned in an airplane crash—and the movie was never made."

A while back, Radio Diaries produced a story for This American Life, recapping Cimillo's vision quest down Highway 1 in the City of New York's cherry red bus.

In 2015, we have that CitiBike dude, who probably just wanted to go viral.