In the summer of 2016, Charlotte Rea suddenly became very sick. "At the time I wasn't aware of what was wrong with me, but after numerous tests and doctors, I was eventually diagnosed with Psychogenic Non-Epileptic Seizures—a disorder characterized by frequent seizure-like episodes," she said. "Unfortunately, this means that as much as I've tried to avoid it, I have had many, many seizures in public over the years." Having to deal with these sudden seizures meant the Brooklyn resident was often left at her most vulnerable while roaming around a city whose residents are not exactly renowned for their warmth with strangers.

But she found that New Yorkers were consistently and unbelievably kind with her, whether asking if she was alright or even physically carrying her somewhere safer. "The first time I ever had a seizure was on a train platform at Union Square station," the 26-year-old said. "A woman stayed with me, held my hand, and calmed me down while EMTs were on their way, and a group of young men stuck around for over 20 minutes in case the EMTs needed help carrying me up to the surface. I was so out of sorts in the moment that I wasn't able to thank them all, and to this day I deeply regret it."

To that end, Rea, who works in tech and also as a freelancer photographer, has now launched "With Love, New York" as a way of saying thanks to all those strangers. Until August 7th, she is collecting anonymous thank you notes addressed to strangers from across the five boroughs. At the end of summer, she's teaming up with LinkNYC to post them at kiosks around the city.

"I became very attached to the idea of trying to find a way to thank all the people who have gone out of their way to help me," she said. She added that she's always loved projects that center around positive, anonymous sharing (like PostSecret or the Subway Therapy notes), and she hopes this serves on a continuum with things like that, as a way of helping people connect more (and it doesn't hurt that this project utilizes LinkNYC's hulking data mining obelisks as a force for good).

"For better or for worse, we live in a city that can be incredibly isolating, and I don't believe we need an outlet for positivity so much as we need more public outlets for communication and sharing experiences," she added. "Many of the social institutions that tied us to our neighbors in the past are disappearing, and being almost entirely unable to communicate with people you live near but aren't directly 'connected' with only exacerbates our experiences of loneliness and feelings of distance from one another. This project is a very small attempt to bridge that gap." 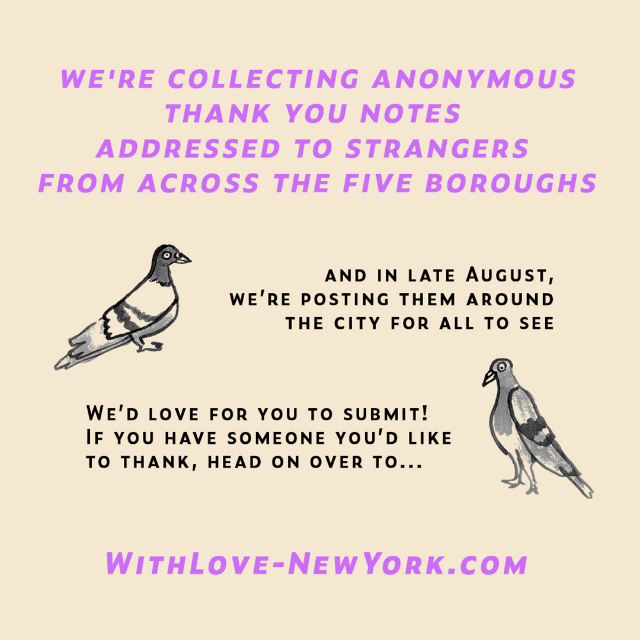 The project launched this week, and has already had several submissions that run the gamut from people sharing an umbrella during a rainstorm to someone literally saving someone's life. You can find the submission form here—she encourages people to use their real names if they want, but they can also use a pseudonym or initials. She'll vet the submissions to make sure they fit the guidelines (i.e.: it needs to be addressed to a stranger, not someone you already know), but she wants to post as many notes as they can on LinkNYC kiosks (as well as on social media).

Overall, Rea has an extremely positive outlook on the kindness of locals, though she is quick to note that her experience is not necessarily universal for everyone. "Even though I know it's naive to essentially state that 'people were nice to me, so most people are nice,' my personal experiences have shown me that, in the majority of cases, a kind stranger usually isn't too far away."

She added, "I will say, though, that my intention is certainly not to judge those who do not proactively step in to help others. Everyone has a different relationship with the public world and people around them, and I'm not here to shame anyone for not 'being a hero.' Perhaps, though, in some ways this project is not just about thanking the people who have been kind in the past—it's also about reminding those who are hesitant to step in that being a good Samaritan can make a real difference that is valued and remembered by real people."