Tempest in a Tank Top 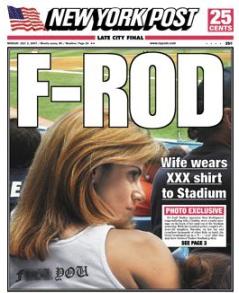 Yesterday was not a great day in the Rodriguez household: Yankees third baseman Alex Rodriguez left the game with a strained hamstring and his wife Cynthia was raked over the fiery NYC media coals after wearing a tank top with a swear-word on the back. Yankees manager Brian Cashman told reporters he had discussed the situation with Cynthia, "She's part of the family and obviously, we'll just keep that in-house."

The Post believes C-Rod bought the tank at Chrome Hearts. In fact, the Post sent a blond female reporter to last night's game, wearing the same tank top, and she was thrown out.

She then barked into her walkie-talkie, and a male guard appeared, and the woman sniffed, "Look at her shirt."

"Look at the back of your shirt," he said.

"Cynthia Rodriguez wore this [Sunday], and she didn't get thrown out," I said.

"We had a big meeting about that today, in fact," he said. "Don't worry about Cynthia Rodriguez."

A-Rod refused to discuss T-shirt Gate (so dubbed by the Daily News' Bill Madden), saying, "I'm only talking about baseball. Only baseball." Yankees legend Whitey Ford gave his opinion, "Maybe she's getting even with him," over A-Rod's alleged dalliances.